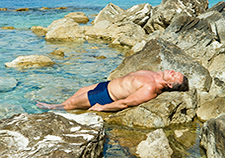 A VA-Yale study has pinpointed a gene that may play a role in addiction to tanning. (Photo: ©istock/corolanty)

A VA-Yale study has pinpointed a gene that may play a role in addiction to tanning. (Photo: ©istock/corolanty)

The warm weather may be behind us now, and all the bathing suits stored away. But researchers with Yale University and the VA Connecticut Healthcare System recently published a study looking at a little-discussed form of addiction—tanning dependence. It appeared in the October 2014 issue Experimental Dermatology.

From sunburn and premature aging to skin cancer and eye damage, researchers have long known about the negative effects of too much exposure to ultraviolet radiation, whether from the sun or tanning beds. But no scientists had ever linked a specific gene to tanning addiction—until now.

Dr. Brenda Cartmel, a senior research scientist at the Yale School of Public Health, and her Yale and VA colleagues started by having nearly 500 people complete three addiction screening questionnaires, the kind most often used to identify alcohol or drug addictions. Two of the scales were adapted from existing addiction measures. One was newly developed for the tanning study. It asked, for example, about loss of control, cravings, withdrawal, stress relief, and mood enhancement related to tanning.

The researchers then scanned the DNA of both the dependent and non-dependent groups for more than 300,000 genetic variants. They found a statistically significant difference between the groups with respect to their odds of having certain variants of a gene called PTCHD2. The function of the gene is not yet known, although researchers do know that the proteins it codes for are found mainly in the brain.

Other genes that had been linked to addictions of other types in past studies did not emerge as statistically significant.

"There is a small percentage of the population that gets addicted [to tanning]," says Cartmel. "Ultimately, we hope that we might be able to develop new interventions that would help those people."

According to Cartmel, younger people were more likely to display tanning dependence, although overall some 16 percent of the study participants screened positive. "It's the first study looking at the genetics of tanning dependence and it's fairly small," cautions Cartmel. "It definitely needs replication." In any event, her team called the results "provocative" in that they do suggest a genetic factor in tanning addiction.

The hazards of excessive tanning, whether at the beach or in the tanning booth, are well-studied. According to the national Skin Cancer Foundation, tans are caused by ultraviolet radiation, meaning if you have one, you've already sustained some skin-cell damage. Over time that damage can be cumulative, leading to premature skin aging and skin cancer.

Experts suggest using a sunscreen with an SPF 15 or higher, avoiding direct sun in the middle of the day, and undergoing annual skin exams.

Previous research has suggested that ultraviolet light can trigger the production of endorphins—the body's natural "feel good" chemicals, capable of creating a feeling of euphoria. That could be part of the basis for people's desire for "fun in the sun." Those with certain genetic factors might be driven to take this to extremes.

While Cartmel's recent study focused on a relatively small population, she believes it could open a new avenue into research on the subject. "We're hoping this [study] is going to encourage other people to do research in the area," she says. Future research could help to identify people at a high risk for certain types of skin cancer. "Right now there aren't any treatments available for tanning addiction," says Cartmel. "Further research could lead to the development of interventions and, ultimately, lower the risk of skin cancer."