ORD Home » Currents » Winter2015  » When it comes to HIV therapy, the earlier the better

When it comes to HIV therapy, the earlier the better 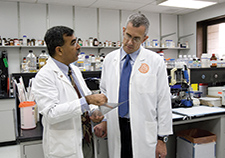 A study of HIV-infected service members and their beneficiaries found that those who received antiretroviral therapy soon after infection—within a year—were half as likely to develop AIDS, versus those who waited longer. They were also more likely to achieve and maintain a normal level of infection-fighting CD4 T cells.

"We used to use T-cell counts as a guideline for therapy," says Dr. Sunil K Ahuja, staff physician and director of the Center for Personalized Medicine at the South Texas VA Healthcare System. "First we were supposed to treat patients when their CD4 count reached 200. Then later it went up to 350. It's changed. The results of this study say regardless, the sooner you can start treatment, the better the probability of achieving a normal count again."

According to Ahuja, also a professor of medicine at the University of Texas Health Science Center at San Antonio, a normal CD4 count in a healthy individual would be close to 800.

The study used data from more than 1,000 service members and beneficiaries who had already been diagnosed with HIV-1. Ahuja and his team checked to see how long after contracting the virus they began treatment and identified what the odds were that they would show normal CD4 counts.

"We found that if you treat within 12 months of infection, you'd have much better odds of achieving a normal T-Cell count," says Ahuja. "The difficult thing, of course, is to initiate testing as early as possible after exposure," something that is notoriously hard to do with HIV. Ahuja suggests increasing testing for at-risk populations—intravenous needle users, for example.

"This has major public health implications," says the researcher. "Most infections are transmitted during the acute infection status, when the amount of the virus in the blood is very high. If we had frequent testing, followed by rapid initiation of antiretroviral therapy, it could have a major effect on the number of transmissions and on the long-term health of infected people."

To Ahuja, the benefits of the study go beyond just public health policy and testing design: They apply to patients themselves. "With this knowledge," he says, "patients can advocate for themselves. If a doctor wants them to wait to start therapy, they can say no. You need to start me now. That would be a major advantage for them."