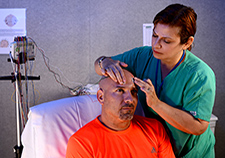 As the result of a 2008 congressional mandate, there are now 16 integrated but geographically dispersed VA facilities designed to treat epilepsy. The centers serve as hubs for their regions, housing expertise and equipment that more rural facilities often lack.

With their focus on regional, coordinated care and interaction with rural physicians, the ECOEs represent a major transformation in the way epilepsy care is delivered, says Dr. Mary Jo Pugh, a research scientist at the South Texas Veterans Health Care System who has been leading the study of their effectiveness.

"The model does appear to be successful," says Pugh. Although the final results of the study won't be available for another six months to a year, Pugh says her research has revealed improvements in access to care, and quality of care.

Around 1 percent of VA patients have epilepsy. Older patients are more at risk. Also, studies have now shown that traumatic brain injury can be a significant factor for new-onset epilepsy in younger Veterans.

One such study was published by Pugh's group this month in the Journal of Head Trauma and Rehabilitation. "We found the more severe the TBI, the stronger the association with epilepsy," says Pugh. "Even mild TBI is associated with epilepsy."

Pugh says the impact of epilepsy is profound, requiring coordinated care to reduce or eliminate seizures and deal with comorbid conditions.

"If your epilepsy isn't under control, you typically can't drive, have difficulty becoming employed—especially in jobs many young Veterans seek—and quality of life is an issue," says Pugh. "You're afraid to do things and that can affect not only the patient, but also the family. Even people with controlled seizures have higher-than-expected rates of anxiety and depression. Those with uncontrolled seizures can also have cognitive deficits. It is a complex condition requiring coordinated care with a variety of specialists."

For the study, Pugh and her team reviewed the records of Veterans diagnosed with epilepsy from 2008 through 2014. "We were able to collect data both before the implementation of the ECOEs, and after they were fully implemented," she says. By comparing access and quality-of-care outcomes across time, the study should reflect how the program is doing at improving care for Veterans.

"They've done a great job of leveraging the 16 hubs," says Pugh. "Each region has developed their areas of expertise to expand care beyond their own facilities. These connections among clinicians are really important because they build trust and increases referrals, as well as Veterans' access."

An even newer focus, identified in December 2014 at the American Epilepsy Society ECOE consortium meeting, is health issues among women with epilepsy. "These are important strides made with a relatively small investment by VA," says Pugh.

"There isn't much known about the quality of care for epilepsy," she adds. "This [study] is unprecedented. Non-VA care for epilepsy is very fragmented, so this is an opportunity to identify best practices and implement them in a nationwide setting."