VA study on chiropractic for back pain yields mixed results: Disability improves, but pain relief same as with placebo 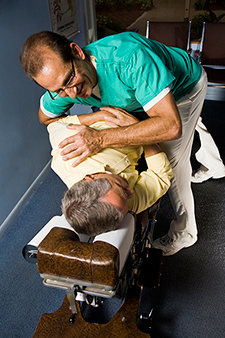 In a VA chiropractic study that involved 136 older Veterans with chronic low back pain, the treatment improved disability but did no better than placebo at relieving pain. (Photo: ©iStock/LattaPictures)

In a VA chiropractic study that involved 136 older Veterans with chronic low back pain, the treatment improved disability but did no better than placebo at relieving pain. (Photo: ©iStock/LattaPictures)

Chronic back pain changes everything. Things like driving a car, sitting at a desk, or even tying a shoelace become Herculean tasks. The condition can be debilitating and, unfortunately, for as many as 40 percent of Veterans over 65 years old, it is a way of life.

Untreated, chronic back pain, or CBP, can contribute to depression, disability, and a poor quality of life. Unfortunately, the treatment options can seem only marginally better: Long-term opioid use or invasive procedures such as surgery are often the norm for those with CBP.

Now a VA study on a common chiropractic therapy used to treat chronic back pain has found that when it comes to pain, a placebo treatment may be just as effective as the therapy itself.

To stop there, though, would be oversimplification of a complex issue, says lead researcher Dr. Paul Dougherty, a staff chiropractor at the Canandaigua VA Medical Center in upstate New York. He notes that chronic back pain is more than just a feeling; it is also a source of disability. And for those in the study who received chiropractic care, disability rates did improve, compared with those who received only placebo.

"That's really the take-home point when it comes to chronic back pain," says Dr. Dougherty. "The pain can lead to disability and impaired mobility and that can have its own health consequences, particularly in older adults."

Dougherty is also a member of the faculty at both the New York Chiropractic College and the University of Rochester School of Medicine and Dentistry.

For the study, his group identified 136 Veterans 65 years old or older with lower back pain who had never received chiropractic care—something that proved trickier than anticipated. "We didn't think it was going to be as hard as it was," says Dougherty. "It was quite difficult. We had one patient who last saw a chiropractor 50 years before and we had to exclude him."

"SMT is where you take a joint to its end range," says Dougherty. "When you crack your knuckles and squeeze them together, you hear the pop. That pop is the joint changing pressure. SMT is basically doing just that—taking a joint that isn't moving enough and trying to maneuver it to where it moves normally again and changes pressure."

The remaining 67 participants were enrolled in what is known as a sham intervention, a placebo. For that group, participants lay face down and had water-based ultrasound gel spread across their lower back. The chiropractor would then rub a detuned ultrasound machine across the affected area for 11 minutes. While the ultrasound machine itself was on and making noise to stimulate the participants' senses, the wand did not transmit any sound waves. The intervention was, in effect, just a high-tech but gentle back rub.

Patients in both groups received an educational pamphlet from the Arthritis Foundation on different types of back pain.

For four weeks the participants received treatment, twice per week. At the end of the fifth week, Dougherty and his colleagues had the participants rate their pain on a standardized scale. Interestingly enough, both groups showed similar pain improvement.

Dougherty is careful to note that the study doesn't prove or disprove anything regarding SMT. He points out that while pain is perception-based, stemming as much from the mind as the body, disability is much more physical.

"It speaks to self-efficacy," says Dougherty. "Twice a week for four weeks, we met with these patients. We talked to them about their pain. They were touched in a caring and meaningful way. It comes down to this: If people believe they're going to get better, it changes the way they think about pain."

Dougherty has his eye on another group of Veterans in addition to the older ones in his study. According to him, the most common disabilities among Iraq and Afghanistan Veterans are musculoskeletal in nature. "Lower back pain is number-one and that can lead to opioids, invasive interventions, and really, studies like this help us to see there are alternative treatments," says Dougherty.

The goal of SMT is to improve not only pain, but also patients' physical condition, something the study suggests occurred.

"There are people for whom spinal manipulation therapy is best, and there are others dealing with pain who need improved self-efficacy. If we can provide that through motivational interviewing, mindful meditation, or something similar, then it can be both cost-effective and low-risk."