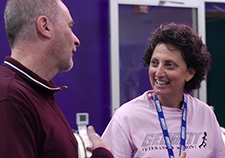 Dr. Miriam Morey has been awarded the VA Rehabilitation Research and Development Service's highest honor—the Paul B. Magnuson Award. It is given to recognize humanitarianism and dedication in service to Veterans.

Morey is considered a leading researcher in the field of exercise and aging. She serves as the associate director of research at the Geriatric Research, Education, and Clinical Center at the Durham VA Health Care System in North Carolina. She is also professor of medicine and co-director of the Claude D. Pepper Older Americans Independence Center at Duke University Medical Center.

"Dr. Morey's research is a compelling example of blended clinical and research activities," said Dr. Jean Beckham, co-chair for the research and development committee at the Durham VAMC. "Her clinical demonstration program, Gerofit, has provided robust improvements to aging Veterans by increasing their physical fitness, functional status, and well-being."

Gerofit, a VA Best Practice, is a supervised exercise program designed to help aging Veterans improve their physical strength and functional independence. Morey developed the program in the mid-1980s to help reverse functional decline in older Veterans. The Office of Geriatrics and Extended Care and the Office of Rural Health in VA committed $10 million over the past five years to expand the program and develop new delivery models like tele-video exercise for rural Veterans. To date, Gerofit has been implemented at 17 VA health care systems across the U.S.

Morey is known for her collaborative approach to geriatrics research, having fostered research projects that extend across multiple disciplines such as nursing, engineering, surgery, oncology, cardiology, physical therapy, orthopedics, and community and family medicine.

In 2016, Morey and her team published a landmark study called "Physical Performance Across the Lifespan (PALS)." Investigators from the Durham VA Medical Center and Duke University followed 775 individuals between ages 30 and 90 for two years. Participants were assessed for mobility, strength, endurance, and balance. They also contributed blood samples and completed a medical history. The researchers found that physical performance in study participants started to decline in their 50s, earlier than typically detected. Based on these findings, the research team recommended the use of physical assessments across an adult's lifespan to facilitate early intervention.

Morey has been instrumental in mentoring young physicians studying clinical biomarkers of functional decline in older adults. Dr. Thomas Povsic, with guidance from Morey, published research that has identified depletion of progenitor cells as a possible marker for age-related functional decline. The team used data from Morey's VA-funded clinical trial that examined the effects of home-based counseling on older Veterans with prediabetes.

Morey's work is of particular relevance to VA, noted Dr. Gregory Eagerton, acting director of the Durham VAMC. Older Veterans over the age of 60 represent more than half of the VA population and they tend to use more health care. In 2017, the mean age of all Veterans in the U.S. was 64 years. Preserving physical function and building greater endurance in old age can make a significant impact on quality of life for Veterans.

The Magnuson Award honors the life and legacy of surgeon Dr. Paul B. Magnuson, who continuously sought new treatments and devices for his patients as they faced disability. Magnuson understood his duty, not just to cure, but to also restore a patient "to his family, his job, and his life."