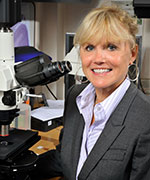 VA research scientists Dr. Ann McKee and Dr. Tony Wyss-Coray were named to Time magazine's "The Healthcare 50"—a list of the 50 most-influential people in health care in 2018. The list honors scientists and innovators who are transforming the way we approach and deliver health care in the United States.

Dr. Ann McKee is chief of neuropathology at the VA Boston Healthcare System and director of the VA-BU-CLF Brain Bank, a joint endeavor between VA, Boston University, and the Concussion Legacy Foundation. She is a pioneer in identifying and understanding the repercussions of chronic traumatic encephalopathy (CTE)—a degenerative condition caused by repeated traumatic blows to the head. CTE has been associated with repetitive, mild traumatic brain injury in military service members. Mild TBI is the most common brain injury affecting members of the military, and is referred to as the signature injury of the wars in Iraq and Afghanistan.

CTE has been more frequently documented in professional athletes who play contact sports. McKee's research has called widespread attention to the alarming prevalence of CTE in professional football players. After former New England Patriots tight end Aaron Hernandez died by suicide at the age of 27, McKee discovered CTE in his brain—the most severe case of CTE she had seen in someone his age. Her research has also demonstrated that adults are not the only ones at risk of brain injury from mild repetitive trauma. McKee has found evidence that children 6 to12 years old who play tackle football are also at risk for brain injury.

McKee was selected by Time for her work to "keep athletes safe." 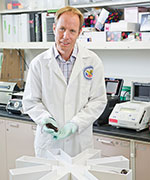 Dr. Tony Wyss-Coray is a VA senior research scientist and associate director of the Center for Tissue Regeneration, Repair and Restoration at Palo Alto, California. He is also a professor of neurology and neurological sciences at Stanford University. His laboratory studies the effects of aging and immune responses on the brain and the role that Alzheimer's disease plays in brain degeneration and memory loss.

Wyss-Coray is best-known for his groundbreaking research into the use of blood taken from young mice to combat the effects of aging and memory loss in older mice. The process originally involved surgically connecting young mice to older mice—so that they would share blood circulation. Now, his team injects plasma from donor mice into older mice. He hopes, eventually, to perfect the technique for use in humans, with an eye toward treating Alzheimer’s disease.

Wyss-Coray was selected by Time for his work in "using blood as medicine."