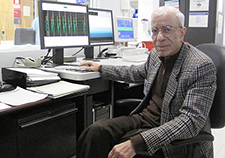 Nabil El-Sherif, M.D., received the American College of Cardiology's prestigious Distinguished Science Award for 2016 in recognition of his translational research on heart arrhythmias.

The ACC initiated the award in 1982 and so far has awarded it to only 55 cardiologists in the U.S. and Europe.

"This is a great acknowledgment of the quality of VA medicine," says El-Sherif.

"This is a great acknowledgment of the quality of VA medicine."

El-Sherif's work has improved the management of cardiac rhythm disorders in two main groups of patients.

The first consists of those who experience palpitations, dizziness, or fatigue, along with other non-life threatening symptoms. These symptoms are usually caused by atrial tachycardia, atrial flutter, or atrial fibrillation—various forms of irregular heartbeats.

These rhythm disorders can be cured in almost all cases by a relatively noninvasive procedure that El-Sherif and others developed more than 20 years ago, called transcatheter radiofrequency ablation.

In this procedure, doctors run an electrode catheter to the heart and test to see which heart muscle cells are responsible for generating the impulses causing the irregular heartbeat. Then they administer mild, painless radiofrequency signals through the catheter to the targeted area, usually about half a centimeter wide. When the targeted cells die, the heartbeat usually returns to normal.

The second group consists of patients with more serious rhythm disorders, in which ventricular tachycardia or fibrillation may result in sudden death. This usually occurs in patients with anatomical damage to the heart, such as a weakened left ventricular heart muscle. 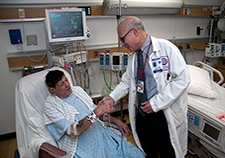 Thirty years ago, working on a series of experiments, El-Sherif discovered that some of these potentially lethal arrhythmias were due to an electrical mechanism that he labeled the "figure-of-eight model of reentry," due to the shape of the circuits involved.

"The figure-of-eight identified the optimal site from which ventricular tachycardia could be eliminated, either surgically or by electrode catheter ablation," explains El-Sherif.

Much of El-Sherif's current work focuses on identifying which patients in this group are at highest risk, so that an internal defibrillator can be implanted in time to save the person's life.

"There is no single or combined series of tests at this time to precisely predict high-risk patients," he says.

Over the past 20 years, El-Sherif and his staff at the Brooklyn VA have implanted defibrillators in hundreds of patients at risk of sudden cardiac death. However, only about a third of these patients are saved from arrhythmic death thanks to the devices; the majority of them eventually die from other causes, sometimes years later, without the device ever having been activated. El-Sherif says he hopes his team's work will lead to better ways to stratify these patients so the expensive devices and implantation procedures can be used only for those patients who will likely actually benefit from them.

Dr. Margaret Dessau contributed to this article. She is a retired physician who volunteers in the public affairs office at the VA New York Harbor Healthcare System.