Treating TBI and PTSD together

Psychotherapy plus 'CogSMART' being tested at San Diego VA 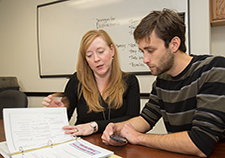 Mild traumatic brain injury and posttraumatic stress disorder—they are both known as "signature wounds" of the recent wars in Afghanistan and Iraq. In fact, among Veterans with mild TBI, at least 4 in 10 also have PTSD.

So addressing the two conditions together makes sense. That's the premise behind an ongoing study at the VA San Diego Healthcare System. Researchers are combining an evidence-based PTSD treatment called cognitive processing therapy (CPT) with a relatively new approach to mTBI called Cognitive Symptom Management and Rehabilitation Therapy, or CogSMART for short.

"We have integrated components of CogSMART into CPT in order to address the unique challenges faced by Veterans with ongoing cognitive complaints related to PTSD and a history of mild TBI," wrote the team, led by Dr. Amy Jak. They described their approach in a journal article published in November 2015.

The study has been underway since 2012 and will wind down later this year. The goal is to have enrolled 90 Veterans in all.

CPT was first developed by VA psychologist Dr. Patricia Resick, with the National Center for PTSD, in the 1980s. Clients learn about their PTSD symptoms, and the changes in beliefs that often occur after trauma—for example, about safety, trust, and relationships. They are helped to become aware of their thoughts and feelings, and use worksheets that teach them how to challenge their unhelpful thoughts. 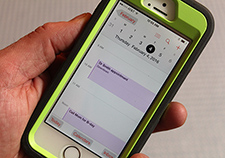 Taking better advantage of smartphone or paper calendars is one of the strategies taught in CogSMART and SMART-CPT. (Photo by Mitch Mirkin)

Taking better advantage of smartphone or paper calendars is one of the strategies taught in CogSMART and SMART-CPT. (Photo by Mitch Mirkin)

CPT and prolonged exposure therapy are the two main psychotherapies promoted in VA for treating PTSD.

CogSMART was first developed by Jak's colleague Dr. Elizabeth Twamley at the San Diego VA. Over 12 weeks, it teaches Veterans strategies to help with fatigue, sleep problems, headaches, and stress, and to improve attention, memory, and problem-solving.

In 2014, the CogSMART group published a pilot study involving 50 Veterans. The trial showed improvements in several areas, including memory.

Twamley compares CogSMART to using a cane to support a weak leg: "By working around impairments, we can take advantage of an individual's strengths â€¦ and use different ways and possibly different brain areas to perform cognitively demanding tasks."

"These are strategies that are often useful for perfectly healthy people. We all forget stuff."

A regular weekly CPT session is an hour long. Weaving in the CogSMART components for the full SMART-CPT session adds 15 minutes.

Jak says her team takes into account the impact that PTSD and TBI combined can have on attention span.

"There are breaks built in, particularly in SMART-CPT. These are active, very purposeful breaks. Not 'I'm worn out and I can't do anymore.' We try to do breaks before they get to that point." 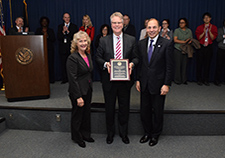 One of the key strategies Veterans learn in CogSMART, or the combined SMART-CPT therapy, is to use calendars. Like a lot of the strategies taught in the program, it doesn't have any stigma attached. It's something most organized people do routinely, whether they have special challenges or not.

"They're the strategies successful people use every day," says Twamley. "There's no stigma associated with using your smartphone calendar to remember things. I use mine."

By the same token, the strategies are not necessarily specific to TBI.

"The strategies in and of themselves don't care where the memory or attention problems come from," Jak points out. "If somebody came to me who had ADD, or multiple sclerosis, I would teach many of the same strategies."

Jak says that while not every CogSMART technique used in SMART-CPT has the same level of formal scientific evidence behind it, "CogSMART as a whole, and cognitive rehabilitation in general, have been shown efficacious in research. Practical experience in the clinic also supports the effectiveness of the specific cognitive strategies."

She adds: "These are all compensatory strategies. In general, there's empirical support for the idea of cognitive rehabilitation using these approaches—taking the weaknesses you have and then using your strengths to work around them. Many of the specific strategies are culled from years of clinical experience, from people who are doing rehab regularly."

As for using a calendar, Jak says most Iraq and Afghanistan Veterans gravitate to the options on their phone, rather than the old-fashioned paper kind.

"A lot go straight to the calendar that's in their phone," says Jak. "It's a younger cohort and they're technologically savvy."

But there are exceptions. And it's all about customizing the strategies based on what the person needs.

"Some people might pick a big whiteboard calendar to keep at home—maybe they have a spouse and children and they want to coordinate others' activities," says Jak. "Or, it's just a bigger visual reminder, or the person is prone to losing his phone. What's going to fit best with their style?"

Whether participants go with digital or paper, says Jak, the main thing is helping them switch to some sort of reliable system to help them plan their time and keep track of their appointments and responsibilities.

"Our clinical, anecdotal experience is that often getting people just to use a calendar is the shift. It's going from, 'Hey, I can keep all this in my head,' to, 'Yes, I need to use an external device.'"

Finding a 'home' for personal items

Another cognitive strategy taught in the program is finding a "home" within the house or apartment for personal items. If you're ever misplaced your keys or phone, you can relate.

"It seems simple," says Jak, "but when people aren't doing it and then change to making this a part of their routine, it makes a big difference.

"Previously, their habit might have been to put these items wherever—their keys go here, they have their sunglasses on their head and then they put them down somewhere else. The idea is that they need to find some central place to put everything. That's a huge complaint we get—'I can't find my phone,' or 'I have to go to work and I can't find my keys!'"

Yet another strategy that seems to quickly gain traction with the Veterans taking part in the trial is visualizing tasks to remember to do them. Psychologists know that when people take in information with multiple senses—for example, not just hearing it, but somehow seeing it also—they are more likely to remember it.

"You tend to hang on to it better," says Jak. "If you saw something and then someone talked to you about it, and then later you touched it with your hand, you're going to have a way better chance of remembering"

The therapists teach participants to visualize in their mind's eye what they hear—to create a mental picture. Jak says, "You can say to yourself, I have to take the meat out of the freezer when I come home, but if you picture yourself opening the freezer and taking out the hamburgers, that's better."

She adds: "These are strategies that are often useful for perfectly healthy people. We all forget stuff."