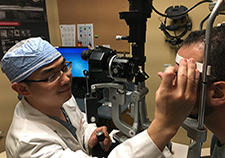 
For Dr. Yang Sun, the vulnerability of the eye hit home when he was in his teens. His grandmother developed glaucoma, a leading cause of irreversible blindness, and was without eyesight for 20 years before her death.

"She said to me when she was alive, 'Everything works except my eyes, but I can't do anything when I can't see,' " Sun recalls. "It impressed on me the importance of sight."

Inspired by this personal experience, Sun went on to devote a large part of his studies to science and medicine in relation to the eye. Today, the ophthalmologist carries a "deep-seated desire" to find a cure or novel treatment for glaucoma, which affects nearly 300,000 Veterans.

"Every day in clinic, I take care of Veterans who go blind from glaucoma," says Sun, who is at the Richard L. Roudebush VA Medical Center in Indianapolis and will be moving in February to the Palo Alto VA Health Care System in California. "There is nothing more motivating than to hear a Vet who says he is losing sight and has lost his ability to drive, or another who says he feels hopeless with impending blindness."

"We are studying cellular functions in ways scientists couldn't dream of just a decade ago."

A technique at the 'cutting edge of science'

Currently, Sun is leading a VA-funded study on a groundbreaking process he hopes will lead to new treatments for VA patients with glaucoma. The heart of the procedure is optogenetics, a new technique that relies on light to control the behavior of proteins or cells in living tissue, specifically neurons, or brain cells. Applying optogenetic techniques for the first time in the eye, Sun and his team are using a light in lab testing to turn on and off protein signals and control the cilium, or rheostat, a critical regulator of eye pressure.

According to Sun, this approach will better define the elements that control eye pressure and may provide a new way to reset the pressure by simply shining a light on the eye. More likely, though, the light technique will lay the groundwork for new drugs that accomplish the same thingâ€”restoring pressure in the eye to normal. The ultimate goal is to slow down the rate of vision loss and to preserve that function.

A rise in eye pressure can lead to glaucoma, but the medical community is at a loss for how it is naturally controlled. In primary open-angle glaucoma, the most common form of the disease, fluid flows abnormally in the eye, causing an increase in pressure and leading to vision loss. Eye drops and surgery, the two most popular ways of lowering eye pressure, work to make less fluid or to improve drainage out of the eye.

Sun says his optogenetic study is the first of its kind.

"This is at the cutting edge of science," he says. "We are studying cellular functions in ways scientists couldn't dream of just a decade ago. This is the first time this has been attempted in the eye because, number one, it's technically difficult, and number two, no one has thought of this idea. We hope to innovate and contribute to finding a cure for glaucoma." 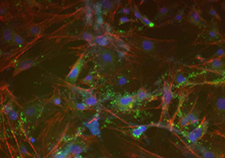 Glaucoma is a group of eye diseases whereby the optic nerve, which conveys vision from the eye to the brain, gradually becomes damaged. In many cases, blood flow to the optic nerve is reduced, and may be further lessened by a rise of fluid pressure in the eyes, leading to vision loss and even blindness. The disease starts off without pain or redness and its effects on vision are not noticeable at first, so it often goes undetected. By the time vision is impaired, damage is irreversible.

One's chances of acquiring glaucoma increase dramatically past the age of 60, and many Vets develop the disease as they age. In addition, a traumatic brain injury (TBI) from a combat blast can put someone at higher risk for glaucoma.

"A blast can disrupt drainage in the eye and can certainly affect the outflow of fluid," Sun says. "That's what we explain to our patients. We say you have had a trauma in the eye. We don't see it, but we think the pipes inside the eyes are being closed off. Therefore, you have higher pressure, and that's why you have glaucoma."

Sun and his team are conducting the VA-funded work at the Eugene and Marilyn Glick Eye Institute at Indiana University. (It will be done at Stanford University after they move to the Palo Alto VAMC.) The researchers are using optogenetic tools to place the enzyme inositol phosphatase, which acts to trigger a chemical reaction, in the eyes of mice. With a novel light-regulated switch that turns on and off the enzymes, Sun is aiming to lower eye pressure when the eye is exposed to blue light. The enzymes go into the ciliary membrane, or the pressure rheostat, and the amount of fluid in the eye is measured.

Those mice are compared with control groups that are exposed to the light but do not receive the enzymes.

"Based on that, we show that the cohort that's getting the enzyme at the correct location has a better outflow," Sun says. "That group has more aqueous [fluid] going out of the eye than the control group. That's lowering the pressure in the eye."

Sun says the data will provide researchers with tools to measure fluid flow out of the eye and allow them to design more sensitive ways to detect change in outflow. The preliminary results, which show that blue light can be used to change the way eye pressure is controlled in the specially treated mice, are "very encouraging," he says.

He notes that the research, which will last another three to four years, should also lead to a better understanding of "mechanosensation" as it relates to eye pressure. That refers to how mechanical stimuli translate into brain signals.

It will also be the basis for clinical trials down the road using inositol phosphatase or other drugs designed to have the same effects on the eye as the optogenetic light, he says.

"That's something we hope to achieve," he says. "Light is not the final treatment, but the means to turn on a switch that can then lead us to new treatments."

Sun believes pharmaceutical companies may possibly begin clinical testing of a new class of anti-glaucoma medications in about 10 years.

"The goal for us is to use this as a basis to see if we can test compounds that can then be moved into clinical trials," he says.