Study finds wide, if uneven, use of PTSD psychotherapies in VA 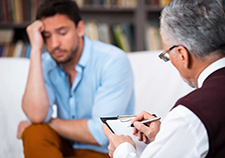 A new review study points to the wide use in VA of evidence-based psychotherapies to treat PTSD, but with variation in how they are applied from clinic to clinic. (Photo for illustrative purposes only. ©iStock/ dima_sidelnikov)

A new review study points to the wide use in VA of evidence-based psychotherapies to treat PTSD, but with variation in how they are applied from clinic to clinic. (Photo for illustrative purposes only. ©iStock/ dima_sidelnikov)


A review of 20 VA research studies has confirmed the widespread use in VA of two evidence-based psychotherapies to treat PTSD. But at the same time, the research points to inconsistencies in how the therapies are applied.

Anger, guilt, sleep problems, and re-living trauma through flashbacks and nightmares are common symptoms for Veterans with PTSD. If not treated properly, those symptoms can get worse over time.

CPT teaches one to evaluate the upsetting thoughts that have existed since trauma, with a focus on changing the way you look at yourself and the world. Therapists teach skills that help a person decide whether there are better ways to think about trauma. PE involves people practicing thinking about the traumatic events they've been through—at a time everything is fine—to help them realize that those memories are not harmful. Case in point: Being in a crowded area where you can't see people behind you may bring up anxious feelings, but it doesn't mean something bad will happen.

The VA review study, published in November 2016 in Administration and Policy in Mental Health, finds that CPT and PE are offered at every VHA facility, and that many clinicians who once considered PTSD incurable in Veterans have seen both non-invasive therapies lead to major improvement in some patients. Many clinicians "now recognize recovery from PTSD is possible," the researchers say.

"There's a lot of clinical lore and not a lot of good data on the selection criteria for who's a good candidate."

VA/DoD clinical practice guidelines recommend CPT and PE as first-line treatments for Veterans with PTS, including when and how to use them. The study points out, however, that use of both psychotherapies at VA mental health clinics is still "highly variable," with data suggesting that some VA sites are not turning to the therapies as often as they could.

The study's lead researcher, Dr. Craig Rosen of the VA Palo Alto (California) Health Care System, says most of the VA clinicians who have been trained in CPT and PE are using those psychotherapies. But there's is no guidance or consensus in the VA system on how many patients should be treated with them, he adds. Some PTSD clinics provide PE or CPT to only 10 to 15 percent of their patients, with others above the 50 percent mark.

Unclear which PTSD patients should get PE or CPT

Adding to the confusion, Rosen says, is the lack of consensus for deciding who is treated with PE or CPT. Just because a Veteran is diagnosed with PTSD doesn't mean he or she should get one of those treatments, he notes.

"There's a lot of clinical lore and not a lot of good data on the selection criteria for who's a good candidate," he says. "Some PTSD clinics say, 'These are the mainstays of what we do.' They're expecting that if you come to the clinic, you'll be treated with prolonged exposure or cognitive processing therapy. Other clinics are more selective in deciding whether you have one of these treatments. A clinic where you may get medication or something to help manage your sleep believes it's not going to do something that will bring up bad memories."

Dr. Richard Monroe, a clinical psychologist at the Cincinnati VA Medical Center, says clinicians at the facility's Trauma Recovery Center use both psychotherapies. He notes, however, that CPT is the main form of treatment in the men's PTSD, men's PTSD/TBI (traumatic brain injury), and women's PTSD residential programs.

To decide which patient uses which psychotherapy at the outpatient treatment clinic, Monroe practices what he calls a "patient-informed" selection process. He explains to patients the specifics of each form of treatment and asks which one they feel more comfortable using. Ultimately, the decision is theirs.

"A patient's willingness and desire to change current patterns of thinking and behaving are key factors in my judgment about who should begin a course of PE or CPT," says Monroe, who was not part of Rosen's study. "Anyone diagnosed with PTSD should, at the very least, be informed of the available evidence-based treatment options and what is expected of them in those treatments. This allows them to make an informed decision about their care. Even if they decide against this treatment due to a desire to avoid talking about what happened or feeling strong emotional reactions, I want them to know that treatment remains available to them."

More than 70 percent of the patients who complete his facility's CPT or PE programs "graduate" without a PTSD diagnosis, Monroe adds.

Rosen's study grew out of the "PTSD Coalition," a group led by the National Center for PTSD in collaboration with VA's Mental Health Quality Enhancement Research Initiative. The coalition promotes communication among implementation scientists who want to help VA and other health care systems expand their use of PTSD treatments that research has shown to be effective.

Hence Rosen's study, which he says is the most comprehensive review to date of PE and CPT in the VA system. The researchers included findings from 20 studies on the implementation of evidence-based PTSD practices at VA facilities. A 2014 study led by Joan Cook of the VA Connecticut Health Care System, for instance, found that clinicians at PTSD residential treatment programs who had progressed further in their training in CPT and PE used those therapies with greater a percentages of their patients, relative to other clinicians.

Cook, a researcher at the National Center for PTSD, was a senior co-author of Rosen's review.

Rosen's team concluded that the most common barrier to the spread of CPT and PE at VA clinics was patient engagement and retention. Both treatments call for a major commitment from the patient. CPT normally consists of 10 to 15 sessions lasting 60 minutes if given individually, or 90 minutes if in a group. PE is given only given individually in 8 to 15 90-minute sessions.

"Even though the data says it will help them, it doesn't mean it feels that way to them," he adds. "All those pieces need to be in place for people to do PE or CPT."

Debate remains about how to be prepare patients for these treatments. Some clinics begin CPT or PE programs after a one-session orientation, while others have six-week orientation periods. There's a belief in many clinics, Rosen says, that longer orientation sessions will better prepare the patient for a CPT or PE program and reduce the dropout rate. But he says there's no hard evidence on whether that is true.

Veterans seeking outpatient treatment at the Cincinnati VA attend a one-time 60-minute orientation session that explains basic information about PTSD and evidence-based treatment options including PE and CPT, according to Monroe. Patients can then choose a treatment preference, before being interviewed by a clinician to determine if that's the best therapeutic option based on the severity of their PTSD symptoms, he notes.

In Rosen's view, clinics should use a scientific approach to find out which approach works better for retention. Half of the patients at PTSD clinics should be randomly chosen for the one-time class, for example, and the other half for the six weekly sessions, he says.

"At the end of the [orientation], you can tell the patients, 'Now you can go on to PE or CPT,' and see which group has more patients make it through the program," Rosen says. "But each clinic thinks the way they do it works for them. So, for one, it's done haphazardly. You really need to randomize people within a clinic, and that will answer for you [the question of whether] this [longer] orientation was necessary or not."