ORD Home » Currents  » When non-adherence to guidelines is a good thing: Study on COPD yields surp... 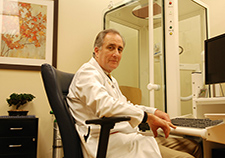 Dr. Hussein Foda is a pulmonary clinician and researcher with VA and Stony Brook University. (Photo by Christopher T. Goodman)

Dr. Hussein Foda is a pulmonary clinician and researcher with VA and Stony Brook University. (Photo by Christopher T. Goodman)


A just-published study at the Northport VA Medical Center in Long Island, New York, offers a glimpse at what happens when doctors' clinical intuition collides with the guidelines they are supposed to follow.

The study analyzed data on nearly 900 patients with chronic obstructive pulmonary disease, a lung condition that affects breathing. Dr. Hussein Foda, the pulmonologist who co-led the study, notes that COPD affects nearly 1 in 6 patients Northport VA patients, and he says that rate is probably typical across VA. The agency on the whole spends some $3 billion yearly on medications to treat the condition, he adds.

One unexpected finding by Foda's team was that 44 percent of the patients in the study were under-treated, according to the clinical guidelines in place during the years looked at in the study, 2005 through 2010. That is, the Veterans were given a medication regimen that was recommended for those with less severe disease. In contrast, only 19 percent of the patients were treated appropriately per the guidelines, which are put out by a group called the Global Initiative for Obstructive Lung Disease, or GOLD.

COPD at a glance

At that time, the GOLD guidelines grouped patients into four categories based strictly on the amount of airway blockage they had on lung function tests in the pulmonary lab—such as how long it took them to blow out all the air in their lungs.

Another twist in Foda's results, perhaps even more striking: Those patients who were under-treated had far fewer exacerbations, on average, than those whose treatment accorded with the guidelines. Exacerbations are the serious flare-ups that bring people with COPD into the hospital, or have them laid up at home for two weeks. That means these patients did better than those whose treatment was prescribed by the book.

The results surprised Foda and his colleagues.

"You'd better make sure that guidelines make sense. They have to be studied and they cannot be static."

Interestingly, one year after the 2010 data cutoff for Foda's study, the GOLD group revised its guidelines. The new guidelines took into account patients' exacerbation rates. This factor would now help determine how they should be treated, in addition to the results of their pulmonary lab tests.

Foda's group's study was far from being released and published at that time. But the study was an omen of things to come.

According to Foda, the research showed that many doctors were bending or ignoring the GOLD guidelines of that time and going with their gut instead. They sensed that fewer exacerbations should lead to less aggressive therapy—regardless of what the spirometry or other tests showed.

"What happened was that the physicians here in the VA were adjusting their treatments depending on what happened with the patients. If the patients did not get exacerbations, their doctors reduced their medication, even though it was recommended in the guidelines to increase," explains Foda, who is also a professor of medicine at Stony Brook University. 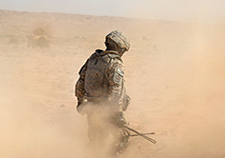 A larger lesson to be gleaned

He says there's a larger lesson to be gleaned from the study.

While he affirms that clinical guidelines are generally a good thing—in fact, "in a system like VA, they are very useful," he says—he stresses that "you'd better make sure that guidelines make sense. They have to be studied and they cannot be static. In this case, the GOLD folks realized there was a need to adjust the guidelines."

The data from the study also reflect well on the preventive and comprehensive care given in VA, Foda says. Besides pointing to high rates of under-treatment in the era of the older GOLD guidelines, the study also showed lower exacerbation rates, compared with what has typically been found outside VA.

One reason for that, says Foda, is the higher rates of flu and pneumonia vaccination in VA, relative to non-VA settings. Those measures can help reduce COPD flare-ups. "Our vaccination rates are much higher than in the private sector," he says. "Our VA medical center is around 90 percent."

There's also the fact that VA patients tend to get more thorough care than they might elsewhere, says Foda. "A lot of people who get exacerbations of COPD have other issues, like congestive heart failure. We treat patients comprehensively. In other systems, they are more likely to just attack the COPD exacerbations and not think about the whole patient."

Another factor: VA pays the entire cost of medication for eligible patients. "That means adherence is going to be better," says Foda.

Yet another reason, he says, is that VA tends to do a better job of identifying and diagnosing COPD, even in Veterans whose disease is only in the early stages and who have only mild symptoms.

Part of that is thanks to the electronic health record and better follow-up overall. There's also more proactive screening for COPD. Foda says in VA, anyone who has a "20 pack-year history"—in other words, they have smoked at least a pack a day for 20 years, or the equivalent, such as two packs a day for 10 years—is referred to a pulmonary lab for testing. Smoking is the biggest risk factor for COPD.

Foda: "We routinely do pulmonary function tests on people who have smoked for a long period of time. In the private sector, unless you go to the doctor complaining of shortness of breath, you're not going to get a test and will thus not be identified as having COPD."

The aggressive COPD screening in VA means two things in terms of Foda's study and his finding that VA patients, at least in Northport, get fewer exacerbations than are commonly seen in COPD studies. First, patients who get an earlier diagnosis can get preventive care that can help ward off exacerbations. Second, there are simply more COPD patients with milder stages of the disease in the equation, meaning the proportion of those suffering exacerbations will be lower.

Those who get exacerbations need to be treated differently

Foda says that while the new COPD guidelines aren't perfect—few guidelines are—most pulmonologists have welcomed the new classifications that are based on whether or not patients get flare-ups, in addition to their lab results.

It would appear that thanks to the updated guidelines, COPD patients—and their doctors—can now breathe easier.

The study, published in the International Journal of Chronic Obstructive Pulmonary Disease, was funded by a grant from Novartis. Foda is chief of medicine and the associate chief of staff for research at the Northport VA, and director of the pulmonary and critical care fellowship at Stony Brook Medicine. His coauthors included Drs. Norman Edelman and Anthony Brehm, with VA and Stony Brook; and Karen Goldsteen with the North Dakota School of Medicine.

COPD at a glance