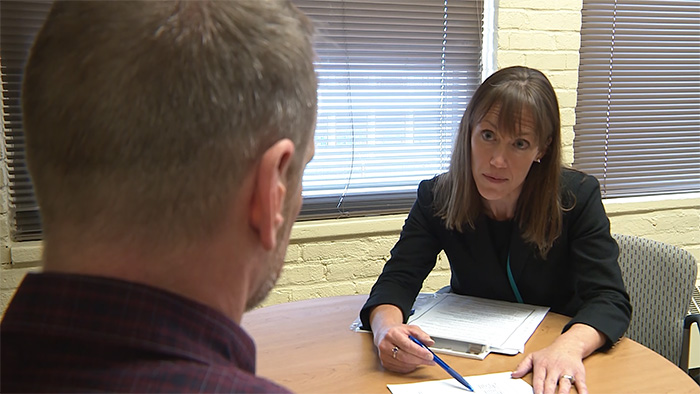 Dr. Erin Romero, a clinical psychologist and the trauma program recovery manager at the Baltimore VA Medical Center, is one of thousands of VA mental health clinicians who provide PTSD treatment to Veterans. (VA photo)

In a landmark study, both of VA's top psychotherapies lead to meaningful improvements for Veterans with PTSD

"Part of what makes psychotherapy helpful is in showing that the patients have adequate knowledge and understanding of why they're doing the treatment and what it entrails."

Research has shown that both treatments are effective with Veterans and non-Veterans. However, researchers had never compared the two treatments head-to-head in a military Veteran population to learn which one is more effective.

In the first paper to compare the two psychotherapies among Veterans, a VA study of more than 900 Veterans with PTSD found prolonged exposure to be statistically more effective than cognitive processing therapy in easing PTSD symptoms. But the difference was not clinically significant, with most of the Veterans showing meaningful improvement from both treatments. The researchers recommended shared decision-making between clinicians and patients to help patients understand the evidence and select their preferred treatment.

Dr. Paula Schnurr, executive director of VA’s National Center for PTSD, was the lead author of the study, which was also the largest PTSD psychotherapy study to date in any population in the total number of participants: 916. The findings appeared in JAMA Network Open on Jan. 19, 2022.

Schnurr explains that deciding which psychotherapy to use should occur as part of a provider-patient consultation. “Shared decision-making is a process of collaboration between a patient and provider aimed at helping the patient choose a preferred treatment,” she says. “It involves giving a patient evidence-based information about treatment options, effectiveness, and benefits and risks, and helping them clarify their goals and preferences in order to select their preferred treatment.”

Dr. Kate Chard of VA Cincinnati and Dr. Joe Ruzek, former head of the National Center for PTSD’s Dissemination and Training Division, co-led the study, which was supported by the VA Cooperative Studies Program.

Psychotherapies are widely available in VA

The two psychotherapies at the center of the study take different approaches.

Prolonged exposure helps people with PTSD gradually approach trauma-related memories, feelings, and situations that they have been avoiding since their trauma. Patients are asked to repeatedly recall and describe out loud the details of their traumatic experience. By confronting these challenges, patients can decrease their PTSD symptoms. Between sessions, they listen to a recording of themselves describing their traumatic moments.

Cognitive processing therapy helps people with PTSD evaluate the upsetting thoughts that have existed since the trauma, with a focus on changing the way they look at themselves and the world. Therapists teach skills that help patients decide whether there are better ways to think about trauma. Patients are taught to challenge their trauma-related beliefs through critical thinking and the use of daily worksheets.

Unlike much of the mainstream health care sector, prolonged exposure and cognitive processing therapy are widely available in VA because the agency launched a national training program in 2006 requiring all VA medical centers to offer them to patients. The two therapies are included in a broader training that covers 17 evidence-based psychotherapies for mental disorders.

Understanding the complex nature of posttraumatic stress disorder, commonly known as PTSD, is one of VA’s most pressing challenges. The agency says many Veterans who fought in Vietnam, the Gulf War, and the post-9/11 conflicts in Iraq and Afghanistan have had that mental health condition sometime in their lives.

PTSD symptoms are well documented: re-experiencing of trauma through flashbacks and nightmares; avoidance of reminders of a traumatic event; changes in thoughts and feelings, such as guilt and emotional numbing; and hyperarousal.

Veterans learned which treatment they were getting

In the study, 916 Veterans from 17 VA medical centers were evenly randomized to receive prolonged exposure or cognitive processing therapy. Both groups took part in 12 one-hour weekly sessions. Therapists trained in the psychotherapies were assigned to each site. The participants who improved more rapidly could attend fewer sessions, and those who improved more slowly were offered extra sessions. More than 70% of the Veterans in both groups reported combat exposure, just over one-third reported military sexual trauma, and more than 90% had experienced a psychiatric disorder other than PTSD.

The average age of the participants was 45. Eighty percent were men, and 58% served Iraq and Afghanistan. The dropout rates—56% in the prolonged exposure cohort and 47% in the cognitive processing therapy group—were comparable to dropout rates in other recent studies of psychotherapy for PTSD in Veterans and to real-world psychotherapy practice.

The primary outcome was changes in PTSD symptom severity based on the Clinician Administered PTSD Scale for DSM-5 (CAPS-5), considered the benchmark for assessing PTSD symptoms. CAPS-5 is a 30-item structured interview that assesses the presence and severity of all PTSD symptoms and can be used to diagnose the condition.

The investigators measured improvement in PTSD symptoms at the end of treatment and in follow-up consultations at three and six months.

Regarding the findings, Schnurr says she was surprised that prolonged exposure was more effective than cognitive processing therapy because, as she points out, there was no strong indication in prior literature to support that. But she emphasized that the difference between the treatments was not clinically significant. The findings, she says, buttress VA’s decision to train providers in both psychotherapies in order to enhance Veteran access to effective treatments for PTSD.

“The findings of this randomized clinical trial support VA’s strategy of promoting prolonged exposure and cognitive processing therapy and reinforce guideline recommendations for these treatments as front-line therapies,” the researchers write. “Given that the difference in the primary outcome was not clinically significant, the lack of differences between treatments on outcomes other than PTSD, and higher attrition in prolonged exposure, we do not believe our findings support a recommendation for prolonged exposure over cognitive processing therapy.”

The study had limitations, including the fact that the participants were Veterans with co-existing health conditions and functional impairment. Therefore, the results may not apply to non-Veterans or patients with less complex conditions. The results also may not generalize to women, since 80% of the participants were men. Plus, the high dropout rate in the study may have reduced the potential benefits of the treatments.

Currently, Schnurr and her colleagues are analyzing the data to help Veterans understand which of the two treatments might work best for them based on their personal characteristics, experiences, and clinical needs. The researchers already have educational materials on the psychotherapies and the decisions that are made to facilitate patient choice.

“I and other members of the study team will continue to study these treatments, especially to find ways to make them more effective, efficient, and available,” Schnurr says. “I’m also interested in studying shared decision-making for PTSD because it’s such an essential part of delivering Veteran-centered care.”