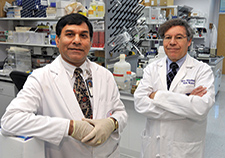 Drs. Mahesh Sharma (left) and Marc Blackman are exploring ways to cut off tumors' blood supply and thereby keep them from growing and spreading. (Photo by Robert Turtil)

Drs. Mahesh Sharma (left) and Marc Blackman are exploring ways to cut off tumors' blood supply and thereby keep them from growing and spreading. (Photo by Robert Turtil)

Cancer is a hungry disease. Solid tumors in the breast or other organs need new blood vessels to feed them and keep them growing. In lab studies using mice, a team at the Washington, D.C., VA Medical Center has found that blocking a protein called annexin A2 can choke off the blood supply to aggressive breast tumors and thereby thwart their growth.

In their latest published study, Dr. Mahesh Sharma and his team treated human breast tumors implanted in mice with an antibody the team developed. The researchers followed the mice for nearly six months—their longest-term results yet—and found a 67 percent shrinkage in the tumors. Tumors in untreated mice continued to grow rapidly.

The treatment that was injected into the mice is called anti-annexin A2 monoclonal antibody. Antibodies are found naturally in the body, as part of the immune system. Lab-made versions started emerging in cancer treatment within the past decade. There are now nearly a dozen FDA-approved cancer treatments based on the approach. The advantage of the drugs is that they act only on cancer-specific proteins and leave healthy cells alone.

"The advantage of the drugs is that they act only on cancer-specific proteins and leave healthy cells alone."

Sharma's lab was among the first to show that unlike other proteins involved in blood clotting and new blood vessel growth, annexin 2 appears to be activated only when cancer is present. 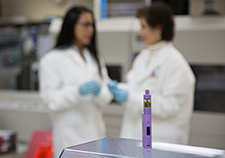 The latest experiments in Sharma's lab also help explain how the anti-ANX A2 antibody works: By blocking annexin 2, it disrupts production of plasmin, an enzyme that causes new blood vessels to grow. The paucity of plasmin in turn affects enzymes called matrix metalloproteinases, or MMPs. The enzymes are found in high amounts in patients with aggressive breast cancer. Scientists believe they are important drivers of the blood vessel growth that enables cancer to spread.

As early as the 1990s, researchers tested MMP inhibitors in clinical trials. But the results were disappointing, as the drugs proved toxic to healthy muscle and bone.

For the most part, the group's current studies, funded by VA and the Department of Defense, rely on a technique known as xenografting: Human tumors are transplanted into mice that are genetically engineered to lack an immune system, so they don't reject the foreign tissue. The method is thought to be more useful than studying an agent's effect on cancer cells in a Petri dish, or on a tumor that originates within an animal.

Further lab studies are needed before the group can test the therapy in a human clinical trial. Sharma hopes that targeting annexin 2 and its downstream mechanisms proves to be an effective strategy to beat not only invasive breast cancer, but other aggressive tumors as well.