ORD Home » Currents  » The loneliness factor: How much does it drive depression in Veterans?

Dr. Alan Teo, a psychiatrist at the VA Portland Health Care System, has studied loneliness as a factor in Veterans' mental health. (Photo by Michael Moody)

The loneliness factor: How much does it drive depression in Veterans?

"We typically think of loneliness as a consequence of depression, rather than a cause."

There has been a wealth of research on the ties between depression and loneliness. In fact, loneliness has been linked to depression perhaps more than any other psychiatric problem. The two are not synonymous, but they interact with one another.

But to what extent, if any, does loneliness contribute to depression in Veterans?

A VA-funded study has addressed that relatively unexplored question. The researchers tried to learn which facets of social connectedness, including loneliness, are linked the most to depression in former service members. Social connectedness refers to relationships and support networks and is vital to a person’s health and self-esteem.

Among five forms of social connectedness, loneliness was tied to the highest levels of depression and suicide ideation, or thoughts of committing suicide, the researchers found. Loneliness was also associated with the lowest levels of patient efforts to manage their health and to seek help.

Dr. Alan Teo, a psychiatrist at the VA Portland Health Care System, led the study, which is now online and will appear in the April 2018 Journal of Affective Disorders.

He explains that the project didn’t begin as an evaluation of loneliness as it relates to depression in Veterans, but that loneliness became the “takeaway message.”

“I wanted to do it from a perspective where almost nothing is known,” he says. “I looked at different facets of social connectedness to see which one sticks out as being the most important, or conversely whether they are equally important.”

Dr. Somnath Saha, a staff physician at VA Portland and a co-author of the study, isn’t surprised by its main conclusions. He sees many patients experiencing depression and loneliness.

“Humans are social beings, and connection to others is part of what buoys us in a stressful world,” Saha says. “When people are cut off from others—whether they are truly socially isolated and are alone or just feel isolated and are lonely—they are navigating their lives without the stabilizing ballast of friends and loved ones. That can lead to major depression and its cardinal symptoms: feeling down, fatigued, overwhelmed, and unmotivated. 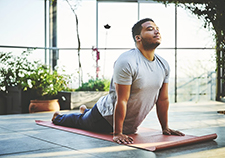 “Being cut off from others is like not being connected to your battery,” he adds. “You lose an important source of energy. Unfortunately, that loss of energy often results in less motivation to engage with others and to seek help. So the isolation and loneliness worsen, and a vicious cycle is created, whereby loneliness leads to depression, which leads to more loneliness and so on. Breaking that cycle is difficult but important.”

According to the American Psychiatric Association, loneliness isn’t necessarily the same as being alone. It usually refers to the distress people feel when their social involvement and relationships are not what they want them to be, such as feeling left out or alone when they’d prefer to be involved or interacting with others.

Loneliness not on the `radar’ of primary care providers

Teo is unaware of any other studies that have analyzed the connection between depression and loneliness in Veterans treated in primary care.

He adds: “Looking at this population of Veterans in primary care is an issue that’s important to VA. We’re now shining light on the importance of paying attention to loneliness within that important patient population.”

At the same time, Teo thinks loneliness is often not on the “radar screen” of primary care doctors when they are treating Veterans with depression. Homeless Veterans and rural Veterans are two groups in the VA population that are vulnerable to loneliness and a lack of social connections, he says.

“This is something that primary care folks are probably not aware of or thinking about,” he says. “So it raises real discussion about how we might tackle this among Veterans in primary care. Primary care doctors are sort of aware that loneliness is a problem when you probe. But it’s probably not at the top of their mind.”

Saha agrees that loneliness is not a top priority for primary care providers.

“We typically think of loneliness as a consequence of depression, rather than a cause,” he says. “We try to address depression using our standard treatments, such as medications and psychotherapy, thinking if we can tackle the depression, people will regain their motivation to engage with others.

Number of confidants not a factor with depression

Teo’s study included 301 patients being treated for probable major depression at the Portland VA and its community-based outpatient clinics (CBOCs). Eight-four percent of the participants had at least moderately severe symptoms of depression, and 28 percent had screened positive for suicide ideation.

The participants were mainly men of a wide range of ages and income levels. Just over half were married or partnered; the rest were separated, divorced, or widowed. Nearly 80 percent of the Veterans identified a spouse or other family member as one of their confidants.

The patients answered questions according to scales that shed light on their social connectedness. For instance:

Based on their statistical methods, Teo and his team determined that loneliness, by far, was linked to depression symptoms more than any of the other forms of social connectedness.

“The number of confidants didn’t matter with depression symptom severity,” Teo says. “It didn’t matter whether you had one close friend of the family, or whether you had 10. People would intuitively think that if you had 10 friends and family you felt really close to, that your depression would be under much better control. Instead, we found it was the loneliness that really mattered. If you feel like you’re missing out on social relationships, that you don’t have companions and you don’t have friends, regardless of the actual number of people, it’s that feeling of loneliness that stands out.”

The researchers also concluded that two forms of social connectedness—social support and social norms—were associated with stronger patient efforts to manage their health and to seek help.

Older Veterans at risk for loneliness

As Teo sees it, loneliness can affect every type of person no matter his or her age, gender, or race. He adds that the condition is especially common among older adults and, in the case of Veterans, is prevalent among those who fought decades ago.

“As people age, there are a lot of changes in their physical mobility, changes in losing people around them,” he says. “So it doesn’t mean you’re pre-ordained to be lonely just because you’re aging. But it’s a risky period, and people are very worried about loneliness in the older population. Guess what: Most of our Veterans are in the older age group. Our Vietnam-era Veterans may have had experiences earlier in life that set them up to become lonely in this more vulnerable stage of life.”

Teo says many Veterans are reluctant to seek help for loneliness.

“First of all, no one stands on a roof and says, `I’m lonely,’ ” he says. “There’s sort of a stigma to acknowledge being lonely, as we see with Veterans being reluctant to talk about having depression. VA has done a wonderful job with public service announcements and other campaigns to get people to acknowledge their PTSD symptoms. If I can share something with VA Secretary [Dr. David] Shulkin and other VA leaders, I’d say we need to promote messaging around the importance of Veterans coming forward when they’re lonely, similar to what we do with Veterans when they have symptoms of PTSD and depression or suicidal thoughts.”

Based on data from the 301 Veterans in his study, Teo and his colleagues are analyzing whether loneliness and other forms of social connectedness impact the use of antidepressants, the number of health care visits, and depression symptoms and suicidal behavior. He’s also considering a pilot study that would compare existing community programs related to loneliness.

“It’s important not to try to reinvent the wheel all the time,” he says. “If there are good programs that are tackling loneliness, we should really think about evaluating them to see whether there’s evidence that can support implementing them in the VA population.”

Dr. Somnath Saha is a staff physician and researcher at the VA Portland Health Care System. (Photo by Michael Moody)

Dr. Somnath Saha is a staff physician and researcher at the VA Portland Health Care System. (Photo by Michael Moody)

Dr. Somnath Saha, a staff physician at the VA Portland Health Care System, routinely screens patients for depression and PTSD. His depression screening questionnaire does not refer to loneliness, but loneliness often surfaces as a reason Veterans feel down or depressed.

“There are a lot of patients who bring up loneliness in their visit, sometimes as their primary complaint, sometimes in the context of depression, sometimes in the context of discussing smoking, drinking or poor sleeping habits,” Saha says. “A frequent rationale for those behaviors is, `I don’t have anything else to do.’ If we can develop a robust approach to addressing loneliness in our patients’ lives, we can do much more good for them than we do now.”

Saha says one of his patients is a “wry” elderly man whose ability to function mentally and physically has declined progressively. He spends nearly all of his time alone in his trailer, where he watches television and gets brief visits from family members. He has been on anti-depressants for years.

He uses his loneliness as a rationale to not care for himself, saying he doesn’t have anything to live for anyway, Saha says.

A cat to the rescue

Saha enlisted a mental health care specialist and a social worker to assist the man. Their efforts may have helped, but it wasn’t until the man got a cat that his condition showed marked improvement.

“The cat has become, in his words, the only thing he sticks around for,” Saha says. “That cat did more for his loneliness than anything we did. He still complains of loneliness and is still dour, but he seems a little more hopeful than before.”

The doctor has one other imaginative solution in mind. He believes online dating could be a remedy for those suffering from loneliness and has recommended it to some of his patients. He acquired the idea when as a junior faculty member at the Portland VA two decades ago, one of his physician mentors suggested online dating as a cure for patients experiencing loneliness.

“He would teach us to recommend this as well,” Saha recalls. “Sometimes, he would go so far as to write a prescription to go on dating sites. People found humor in this. But he was dead serious when he did this, because he knew the best thing he could possibly do for lonely patients was to try to connect them to someone and find meaningful relationships again. He saw that as far more important than any medication or therapy he could prescribe. His approach to this issue was basic and not always successful, but he was able to boast some true successes of patients whose lives improved immensely.”