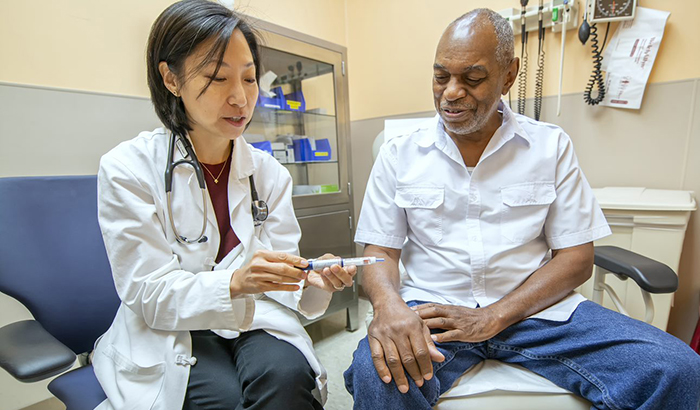 Dr. Mary Rhee, a physician-researcher with the Atlanta VA and Emory University, discusses the use of an insulin pen with VA patient Joseph Fields. (Photo by Lisa Pessin)

"HbA1c mismatches are not widely appreciated, but we found that they are not uncommon, and can have important clinical implications."

Using HbA1c (hemoglobin A1c) levels alone can lead to both over- and under-diagnosis of diabetes, according to Atlanta VA researchers and colleagues. The results suggest oral glucose tests should be used along with HbA1c to ensure a proper diagnosis, say the researchers.

“HbA1c mismatches are not widely appreciated,” explains Dr. Mary Rhee, a researcher with the Atlanta VA Health Care System and Emory University, “but we found that they are not uncommon, and can have important clinical implications. Because HbA1c mismatches could lead to errors, the diagnoses of diabetes/prediabetes should include measurement of fasting glucose levels and/or oral glucose tolerance tests in addition to HbA1c in most Veterans.”

The study was published Nov. 13, 2019, in the journal Diabetic Medicine.

HbA1c blood tests indicate glucose (sugar) levels over the previous two to three months. It is the most common test to diagnose diabetes and assess how well patients are controlling their blood sugar. The test measures the percentage of hemoglobin in red blood cells that are chemically linked to sugar. High HbA1c can mean a person has had high sugar levels in the blood, signifying they have a higher risk of developing diabetes complications. HbA1c testing is convenient because it can be done at any time of day and does not require overnight fasting.

However, for some people the HbA1c test may not accurately reflect the underlying average sugar level. Some may have higher or lower HbA1c readings than would be expected based on actual glucose levels. A glucose test measures the body’s current glucose levels. A mismatch between these two measures could lead to misdiagnosis of diabetes.

To test for the effect of such mismatches on diagnosis of prediabetes and diabetes, the researchers analyzed data from more than 3,000 participants without known diabetes. Patients were screened using the HbA1c test and the oral glucose tolerance test, which measures both fasting glucose levels and glucose levels two hours after the person drinks a glucose liquid.

The oral glucose test showed that 53% of participants had normal glucose metabolism, 40% had prediabetes, and 7% had diabetes. When based on the HbA1c test alone, 63.6% appeared normal, 32.9% registered as prediabetic, and 3.5% as diabetic. Some participants who would have been given a diabetes diagnosis based on HbA1c alone were found to be non-diabetic—based on the oral glucose test results—and others who would have been deemed non-diabetic were found to have the disease.

The results showed that using HbA1c alone led to under-diagnosis of diabetes for people who had lower-than-expected HbA1c scores, and over-diagnoses for people with mismatches in the other direction.

Recommendation: Use both tests

The reason for HbA1c mismatches is currently unknown, according to the researchers. They could be caused by individual differences in red blood cell age.

The researchers point out possible problems beyond diabetes misdiagnosis that can arise from mismatches between the two tests. When HbA1c levels are high relative to actual glucose levels in patients with diabetes, doctors may inappropriately intensify diabetes treatment, which could lead to dangerously low glucose levels. Conversely, when HbA1c levels are lower than expected, patients may not receive adequate treatment intensification.

The researchers conclude that “in most individuals, measurement of glucose levels as well as HbA1c levels should be used to establish diagnoses, and likely to guide management as well.”

The study was supported by the Veterans Health Administration, Emory University, and the National Institutes of Health.