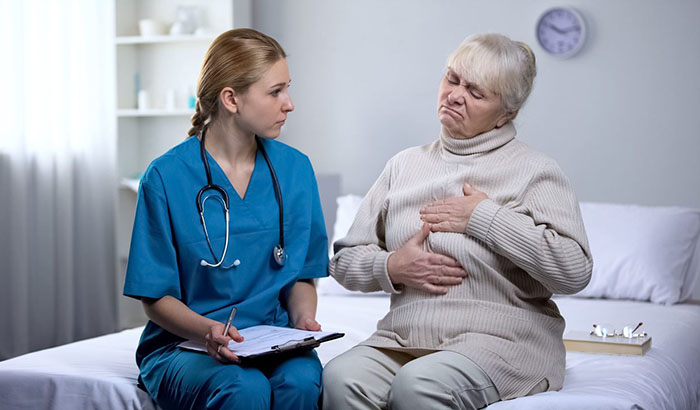 About one in six VA patients are prescribed drugs known as proton pump inhibitors to treat acid-related stomach disorders, such as ulcers, heartburn, or acid reflux. (Photo for illustrative purposes only. ©iStock/Motortion)

Proton pump inhibitors are among the most commonly prescribed medications in VA. Roughly one in six Veterans use them to treat acid-related stomach disorders, such as ulcers, heartburn, or acid reflux. They are effective and well-tolerated when consumed properly.

They are also a much-overused class of drugs.

Studies show that up to 60 percent of prescriptions for proton pump inhibitors (PPIs) may lack an evidence-based indication, meaning they are used without a clear purpose. Their long-term use can possibly lead to pneumonia; low levels of magnesium; bone fractures; higher risk of heart attack; infection with Clostridium difficile, a bacterium that can cause symptoms ranging from diarrhea to life-threatening inflammation of the colon; and an excess risk of death.

VA pharmacies have been launching programs on their own to minimize PPI use in patients who do not need them. Now, a national VA program called RaPPID is underway to de-prescribe PPIs and disseminate best practices. The acronym stands for the National Randomized Proton Pump Inhibitor De-prescribing Program.

How effective is the program? A VA research team is carrying out a study to evaluate it. Working with VA National Pharmacy Benefits Management Services (PBM), which is leading RaPPID, the researchers are trying mainly to understand how effective RaPPID has been in improving the use of PPIs and in ensuring that no negative health consequences—such as peptic ulcer bleeding—have occurred with PPI de-prescribing. 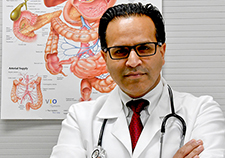 Dr. Sameer Saini, a gastroenterologist with VA in Ann Arbor, is co-leading a research team looking at VA efforts to scale back the use of proton pump inhibitors. (Photo by Brian Hayes)

Dr. Sameer Saini, a gastroenterologist with VA in Ann Arbor, is co-leading a research team looking at VA efforts to scale back the use of proton pump inhibitors. (Photo by Brian Hayes)

Currently, RaPPID is being rolled out to VA facilities in half of the nation’s 18 VISNs (Veteran Integrated Service Networks), which each include VA medical centers in a specific region. The other half will begin the program at a later date. RaPPID is expected to be one of VA’s largest de-prescribing efforts, with up to 1 million Veterans engaged in the program.

The RaPPID roll-out phase will last a year, after which an evaluation of the program will begin. “PBM is leading this program,” Saini says. “They have a lot of experience with these national patient medication safety initiatives where there might be a safety issue with a drug that’s linked to a particular harm. Based on their experiences, they think this roll-out time frame is reasonable.

“We’re trying to understand the intended and unintended effects of PPIs and ensure that we maximize the learning opportunity for Veterans and the VA health system,” he adds. “We hope this evaluation will provide not only valuable insight into the benefits and harms of a national effort to appropriately de-prescribe PPIs, but also broader lessons about how to effectively undertake other programs to de-implement low-value clinical practices in the future.”

RaPPID was modeled after an ongoing PPI de-prescribing program in VISN 17, which encompasses most of Texas. Saini and his colleagues spent a lot of time consulting with Dr. Michelle Shank, the VISN 17 pharmacy executive at the time, to learn about elements that can be incorporated into RaPPID. VISN 17 has the lowest PPI use of any VISN in the country, so it’s an “interesting kind of model,” Saini says.

Currently, Shank is a PBM consultant who works on compliance and efficiency in pharmacy programs. She explains that the VISN 17 program used an educational approach that was developed with a gastroenterologist. The initiative familiarized primary care providers with the right treatment length for PPIs and tips for removing patients from chronic use. The first year of the VISN 17 program, she says, saw a 19% drop in 30-day PPI prescriptions and a 10% decline in patients receiving PPIs. The number of patients receiving PPIs continues to fall, she notes, adding that those who report a return of symptoms following discontinuation are treated with appropriate alternatives or put back on PPIs. 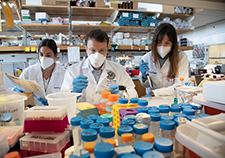 “The RaPPID program reviewed VISN 17 and other facility or VISN initiatives on PPIs and incorporated pieces that worked well and addressed the areas where issues arose,” Shank says. “RaPPID has developed many useful tools to assist facilities with the initiative, including enhanced education and a dashboard that could have improved the VISN 17 rollout.”

No figure exists on how many VA pharmacies have their own PPI de-prescribing programs. Many of these programs are “home-grown,” Saini notes, and tracking is limited on what VA sites are doing to de-prescribe PPIs. “One of the things we’re open to doing as part of the study is finding out more about other VA initiatives around the country,” he says.

Evidence suggesting adverse effects of long-term PPI use has come mostly from retrospective observational studies, one of which explored a possible risk of dementia. But an international clinical trial published in the journal Gastroenterology in September 2019 found no links between PPI use and most of the adverse outcomes noted in the observational studies. The trial included more than 17,000 participants who were randomly assigned to receive a PPI or placebo and were followed for three years. A corresponding review article in the New England Journal of Medicine asserted that the concerns based on observational studies may be exaggerated.

In Saini’s opinion, the clinical trial does not cast doubt on the need for a national de-implementation program. “I don’t think these data change anything,” he says. “The uncertainty remains about the harms from PPIs because the trial did not have a sufficiently long follow-up to definitely rule out long-term harms. Plus, the [statistical estimates] do not rule out the possibility of some of the less common but more alarming effects, such as dementia.”

Proton pump inhibitors account for more than 11 million 30-day prescriptions each year in the VA system. While these drugs are inexpensive on a per-pill basis, their widespread use means they result in $50 million in VA medication costs annually, according to Saini. Research suggests that dosage of the medication could be stopped or reduced in more than one-third of the Veterans who use PPIs.

PPI misuse is not a problem unique to the VA system. Many Americans turn to PPIs for relief of gastroesophageal reflux disease, also known as acid reflux, symptoms of which include heartburn, difficulty swallowing, and sensation of a lump in the throat. It’s well-established that PPIs are often used in excess of the recommended dose.

In RaPPID, an algorithm will use VA electronic health data, including prescription details, to populate a dashboard with patients who are candidates for reducing or discontinuing PPIs. In general, these patients will be using a PPI for uncomplicated acid reflux. From there, a pharmacist will review and share the information with the patient’s primary care provider or a member of a Patient Aligned Care Team (PACT), which is a team of health care professionals who work with Veterans to plan for life-long health and wellness. A clinician will decide whether to discuss this with the patient.

To evaluate RaPPID, Saini, Laine, and Yang are pursuing a randomized controlled trial with a cluster design, meaning the researchers will be comparing VISNs that receive the dashboard to VISNs that are yet to start the program. Alternatively, the dashboard could be assigned to a smaller subset like doctors or individual facilities. Saini says that approach has value because smaller groups lead to more comparisons. But it’s a bit impractical because programs are allocated by VISNs, so it’s difficult to randomize across VISNs, he notes.

During the trial, the researchers will try to learn if RaPPID led to a reduction in PPI use and whether that reduction was safe for patients. “We will measure potential PPI-related harms, such as infections and pneumonia,” Yang says. “Here, we are capitalizing on the randomized rather than observational design to determine whether we can reduce some of these potential adverse effects in long-term PPI users without causing other problems, such as gastrointestinal bleeding.”

Laine adds: “We will also assess the economic effects of RaPPID. We will use data from the trial to estimate the budget impact of RaPPID, taking into account the impact of the program on VA and non-VA health care use. Finally, we’re going to interview and survey Veterans, clinicians, pharmacists, and other stakeholders to try to understand why the program did or did not work.”

The research team is in the data collection phase and does not expect to have findings until the end of the study in 2021.

Evaluating RaPPID, Saini explains, presents a solid opportunity to gain insight into how to more broadly reduce the use of low-value services.

“Focusing VA resources more efficiently through de-implementation of low-value care is a VA priority,” he says. “This partnered evaluation gives VHA the opportunity to reduce the use of a low-value service, thereby improving the health of Veterans, while also making key scientific contributions. First, it will provide real-time insights into barriers and facilitators of a large-scale de-implementation effort from the perspective of Veterans, providers, and systems. The knowledge gained will be `fed back’ to our partners in PBM to further enhance efforts to de-prescribe in other clinical contexts.”

In Saini’s opinion, other dashboard-based initiatives could gain momentum if a review of RaPPID shows that de-prescribing PPIs can be performed safely using the RaPPID dashboard. He also expects that his team will encounter challenges. “We anticipate that as part of the evaluation, we’ll have unexpected findings and that PBM may likely make modifications to the program in response to these findings,” he says. “Perhaps, de-prescribing will cause more harm than originally anticipated. That would suggest we should be less restrictive about PPI use. That’s the purpose of conducting a program evaluation.”