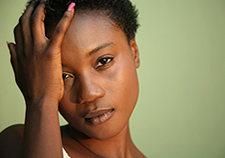 Migraines affect up to around 17 percent of men and 33 percent of women in the U.S. in a given year. (Photo for illustrative purposes only. ©iStock/Anne Clark)

Migraines affect up to around 17 percent of men and 33 percent of women in the U.S. in a given year. (Photo for illustrative purposes only. ©iStock/Anne Clark)

A study that included more than 57,000 VA patients diagnosed with migraine headaches found that 4 in 10 are getting prescriptions for triptans—the top recommended treatment. The study also found that about half are getting preventive treatment in the form of antidepressants or other drugs shown to ward off the debilitating headaches. And a relatively small number—fewer than 1 in 20—are receiving opioids for migraine pain, which is not a recommended treatment.

"Compared to civilian population studies, VA is doing a very good job in terms of giving people migraine-specific medications, and not giving opioids or narcotics for their pain," he says.

"Compared to civilian population studies, VA is doing a very good job in terms of giving people migraine-specific medications, and not giving opioids or narcotics for their pain."

Besides treating patients, Altalib co-directs the Epilepsy Center of Excellence and is a health-services researcher at the Pain Research, Informatics, Multimorbidities, and Education (PRIME) Center at the VA Connecticut Health Care System.

His team included colleagues from Yale and the University of Massachusetts. They published their findings in the journal Cephalalgia.

The study is one of the most comprehensive looks yet at how well VA does in treating migraine headaches—a debilitating ailment that affects up to around 17 percent of men and 33 percent of women in the U.S. in a given year. The Migraine Research Foundation says Americans take 113 million sick days per year because of migraines. 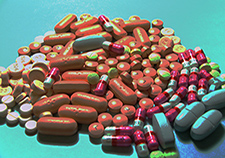 Altalib's study included only Iraq and Afghanistan Veterans and did not track migraine figures for VA patients on the whole. Among the nearly 1.1 million Veterans who were part of the study, more than 57,000 men and women, or just over 5 percent, had a diagnosis of migraine between 2004 and 2012. Women, who comprised about 12 percent of the overall sample, were nearly three times more likely than men to have the condition. Among women, 11.6 percent had a migraine diagnosis, compared with 4.4 percent of their male Veteran counterparts.

The rates are lower than those seen in the general U.S. population. Part of the reason, says the researchers, is that the study was based only on formal diagnoses of the condition, as opposed to self-reports.

Altalib points out that while VA appears to be offering high rates of guideline-adherent care once migraines are diagnosed, it could be that many patients with the condition are being missed. That's worrisome, he says, because when patients with migraines don't get the right diagnosis, they will not get migraine-specific treatments—namely, drugs such as sumatriptan, sold as Imitrex—which can offer targeted relief.

"I'm concerned that many people who are diagnosed with general headache syndromes—and not migraine—may actually have migraines that are unrecognized," says the neurologist. "And perhaps as a result they're not getting appropriate treatment."

According to the new study, diagnoses of migraine among the Iraq-Afghanistan patient cohort rose from fewer than 1,000 in 2004 to nearly 9,000 diagnosed cases in 2012.

Upward trend in diagnoses starting in 2004

For the most part, the rise simply reflects the influx of new patients into the VA system. But interestingly, the steady upward trend was evident only from 2004 and not from 2001, says Altalib, when Iraq and Afghanistan Veterans first started entering VA care. He believes the reason is that clinicians became better at recognizing the condition around 2004, although he's not sure of the reason for that.

"We suspect there began to be increased attention to and identification of migraines, and this led to the increase in diagnoses."

To the extent these combat-related conditions were present, they may have complicated clinicians' ability to pick up the migraine, says Altalib.

"Veterans with PTSD and TBI might come into the clinic with migraine-like symptoms, like nausea or light sensitivity. But since these can be related to PTSD or TBI, the provider might not make the connection that these are actually signs of a migraine condition."

He points to another possible factor in missed migraine diagnoses:

"My anecdotal experience is that many times, Veterans who are coming in for other problems won't mention the fact that they are also getting headaches. Often, they have a short visit with the primary care provider, and that provider may not ask about headaches, let alone explore whether they are migraines or not. So that's one potential area where we might be missing diagnoses."

Study did not track treatment outcomes

Altalib says one plus in the VA system is that primary care providers have easy access to specialists—neurologists or other headache specialists—for consultations and referrals.

Another is that in addition to standard U.S. clinical guidelines—such as those of the American Academy of Neurology—VA and the Department of Defense have their own additional pain-management guidelines. This helps ensure best practices are followed.

One important limitation of his study is that it didn't collect data on migraine severity or frequency, and the effectiveness of treatment. Such data would provide important context for the rates of guideline-concordant care. In theory, the higher those rates, the better. But at the same time, lower rates don't always point to poorer care. For example, some patients may not need triptans because they get adequate relief from over-the-counter remedies such as Motrin or Tylenol. So despite their migraine diagnosis, the doctor will leave well enough alone and not write a prescription. Or, the patient might decline such treatment. Women who plan to become pregnant, for example, might be concerned about side effects.