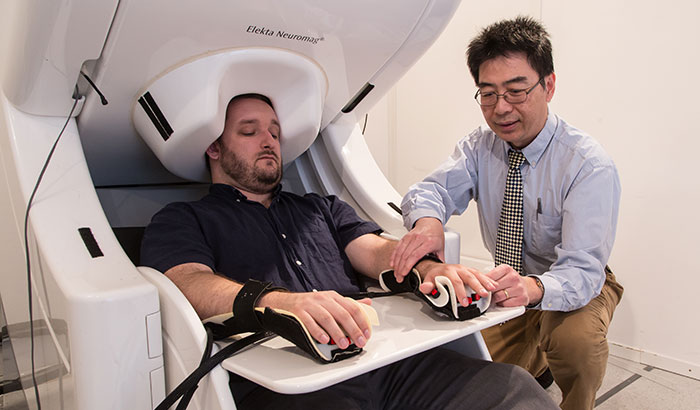 Dr. Mingxiong Huang prepares to do a MEG brain scan on a “healthy control” who has participated in his neuroimaging research. (Photo by Kevin Walsh) 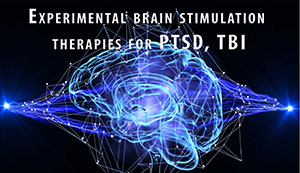 VA scientists are studying an experimental electrical stimulation technique, coupled with neuroimaging, to learn how mild traumatic brain injury interacts with PTSD in specific areas of the brain.

Researchers at the VA San Diego Healthcare System are carrying out a double-blind study on the procedure in collaboration with the University of California, San Diego.

The study involves 200 Veterans with chronic effects of mild traumatic brain injury (mTBI), which is a concussion, and PTSD. Half will undergo a form of non-invasive transcranial electrical stimulation called IASIS that sends low-intensity pulses to the brain, combined with an EEG (electroencephalography) to monitor brain activity. The pulses are aimed at reducing abnormally slow brain waves, as well as post-concussion and PTSD symptoms.

The rest of the Veterans are in a control group. They will not get IASIS treatment but will be scanned multiple times to assess the test-retest reliability of the MEG measurements. 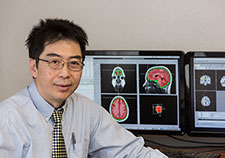 Dr. Mingxiong Huang is a neuroscientist with VA and the University of California, San Diego. (Photo by Kevin Walsh)

Dr. Mingxiong Huang is a neuroscientist with VA and the University of California, San Diego. (Photo by Kevin Walsh)

Three MEG scans are being performed for the IASIS group, one at baseline, one in the middle of the six-week treatment course, and the third at follow-up. MEG is a neuroimaging process that can detect changes in abnormal slow waves in specific areas of the brain.

Dr. Mingxiong Huang, a research scientist at VA San Diego, is leading the study, which is expected to be completed in 2021. He says he and other MEG researchers have learned that the brains of people with mTBI generate abnormal slow waves.  Slow-wave MEG source imaging is a promising marker for detecting specific regions of the brain that are impaired by a mild TBI, with an 85 percent accuracy rate, he says.

More conventional imaging tools, such as a CT scan or a structural MRI, have an accuracy rate of only about 5 percent in detecting mTBI, he says.

“This makes MEG a good functional imaging technique not only for assisting in the diagnosis of mTBI, but also for assessing the efficiency of mTBI treatments, such as drugs,” says Huang, who is also a professor in the department of radiology at the University of California, San Diego (UCSD).  “The results from the study may provide information that could lead to large-scale clinical use of low-intensity transcranial electrical stimulation.”

"n the past, we observed that people with mild TBI had pathological slow waves, and with that we were able to localize the site of the injury."

An example of how alternative therapies can be tested

MEG-based studies are rare, Huang says, most likely because only 20 to 30 MEG scanners are available in the United States. In addition to the VA San Diego, VA medical centers in Minneapolis, Albuquerque, Boston, Seattle, Philadelphia, and San Francisco have also performed MEG research.

“There’s a huge population of Veterans with chronic mTBI and PTSD,” he says. “In fact, studies show that pre-existing mild TBI might double the likelihood of PTSD. The question is why. Treating the mild TBI components might also improve PTSD symptoms. That’s why this research is necessary to understand the interaction between mild TBI and PTSD.”

Huang and his team believe that Veterans in the IASIS group will show much greater declines in post-concussion and PTSD symptoms between the baseline and post-treatment MEG scans.

“Dr. Huang is one of our leading innovative MEG investigators,” says Dr. Stuart Hoffman, scientific program manager for brain injury in VA’s Office of Research and Development, which is sponsoring the study. “This ongoing early phase clinical study is a perfect example how alternative therapies can be tested with scientific rigor and validated methods. If efficacy is found in this early-phase study, a future phase 3 trial could be possible.” 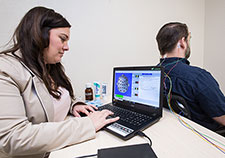 IASIS, the Greek word for healing or cure, is one in a family of low-intensity, pulse-based electrical brain stimulation techniques. It differs from its counterparts, such as LENS and FNS, mainly because it has a lower pulse rate. The low-intensity pulses that IASIS delivers are thought to be more beneficial than LENS, for example, for normalizing brain signals, reducing abnormal slow waves, and speeding up the recovery process, according to Huang.

In recent years, the medical community has focused increasing attention on non-invasive brain-stimulation technologies, such as transcranial direct current stimulation (tDCS) and transcranial magnetic stimulation (TMS). The former applies an electrical current to the skull and brain, while TMS makes use of a magnetic field that the brain translates into electrical activity. Both techniques have the potential to positively impact neurons, brain cells that carry electrical impulses, and can help treat such conditions as depression.

These technologies are being tested on patients with mild TBI. But, as in the case with IASIS, more evidence is needed from clinical trials before they can get FDA approval and come into routine use.

Mild traumatic brain injury is a leading cause of chronic health problems in Veterans, active-duty service members, and civilians. VA has diagnosed TBI in more than 93,000 Vets who suffered brain injuries from blasts and other forms of trauma in the wars in Iraq and Afghanistan.

Mild TBI symptoms include headaches, mood changes, confusion, slow thinking, nausea, loss of smell, sleep disturbance, poor memory, and a sensitivity to light and sounds. In most people with mTBI, symptoms resolve within days after an injury, but they can persist for months or longer. Few treatments are available, partly because the pathology of the chronic effects isn’t fully understood.

Huang’s research follows a VA-funded pilot study in which MEG scans revealed a sharp decline in abnormal brain waves in six mTBI Veterans who underwent the IASIS procedure. The findings appeared in the journal Brain Injury in September 2017.

Huang, who led the study, says it was the first neuroimaging evidence of changes produced by a pulse-based brain stimulation technique in Veterans with traumatic brain injury.

Six Veterans with mild mTBI took part in the study, five of whom were post-9-11 Vets. Three of the participants had a blast-related mTBI, two from a car accident, and one from blunt trauma. Scientists at VA San Diego and USCD carried out the IASIS and MEG procedures.

A baseline MEG scan showed abnormal brain waves in all six Veterans. They then underwent six weeks of IASIS, receiving weak electrical currents via scalp electrodes during two 30-minute sessions per week. The pulses were well below the sensory threshold so the patients couldn’t feel them. The process involved simultaneous EEG monitoring.

The typical length for IASIS treatment is 10 weeks. But the number of participants and the limited availability of MEG resources forced Huang and his team to reduce the length of the testing.

The MEG scans were performed while the Vets were awake but had their eyes closed. Evidence has been rising in support of resting-state MEG slow-wave imaging during wakefulness as an imaging marker for brain abnormalities in people with mTBI.

The researchers performed follow-up MEG scans to investigate the neuronal changes. The scans showed an average decline of 54 percent in abnormal slow waves in approximately the same regions that had abnormal waves during the baseline exam. The pre-frontal lobe is the most common brain area that generated abnormal slow-waves in the Veterans with mTBI, suggesting that region is quite vulnerable to combat-related brain injuries, Huang says.

He notes that it’s important to be able to see the abnormal waves.

“In the past, we observed that people with mild TBI had pathological slow waves, and with that we were able to localize the site of the injury,” he says. “To be able to see the reduction in slow waves is key because now we can start looking at why people get better. So the neuroimaging that documents the neuronal changes due to the reduction in slow waves helps us substantially in understanding the way the brain recovers from TBI.”

The researchers also learned three to six months after the treatment that post-concussive symptoms dropped an average of 53 percent, supporting the investigators’ hypothesis that the MEG slow-wave changes would correlate with the decrease in post-concussive symptoms. The symptoms that declined the most included headaches, dizziness, sleep disturbance, fatigue, nausea, and memory.

Huang says it is unclear if the Vets in the study will see a permanent reduction in abnormal waves and post-concussive symptoms.

“We’re still in the process of collecting information for longer-term windows,” he says. “So we can’t tell for sure right now if the abnormal slow waves or the post-concussive symptoms will be reduced forever, or for that matter, whether the benefits will continue to occur, even with booster treatments.”

Huang and his colleagues say the pilot study set the stage for a new line of research that can advance the understanding of low-intensity, pulse-based transcranial electrical stimulation and its possible benefits for people with mTBI. However, he cautions that the research produced limited data because there were only six participants. He says his double-blind study with 200 Veterans should produce more evidence on the possible benefits of IASIS.

“Pulse-based transcranial electrical stimulation has been used in the past to treat depression, headaches, and traumatic brain injury on an experimental basis,” he says. “However, our pilot study was the first functional neuroimaging study that documents neuronal changes, in terms of abnormal brain waves, in people who underwent transcranial electrical stimulation. It was a small study, but it suggests new potential for effectively speeding the healing process in mild TBI.”