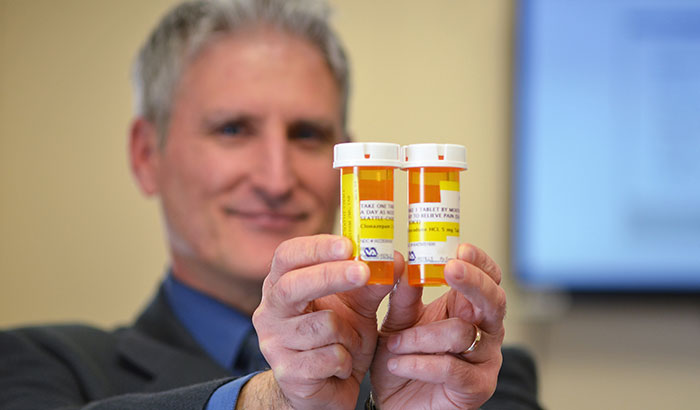 Benzodiazepines such as clonazepam and opioids such as hydrocodone can make for a dangerous combination. VA researchers led by Dr. Eric Hawkins tested an automated alert to remind providers of the risks for specific patients. (Photo by Christopher Pacheco)


Electronic medication alerts can lower co-prescribing of opioids and benzodiazepines in high-risk patients, suggest the results of a VA Puget Sound Health Care System quality-improvement project. Investigators used VA's electronic medical record system to automatically alert care providers prescribing either opioids or benzodiazepine when patients with high-risk conditions had prescriptions for the other drug class. Co-prescribing of the two medications dropped for high-risk patients with substance use disorder, sleep apnea, and suicide risk after the system was implemented.

The findings appeared recently in the journal Medical Care. 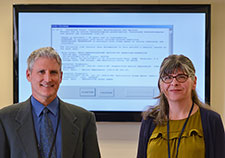 Dr. Eric Hawkins, lead investigator on the project, explains: "This medical record alert is a simple, relatively inexpensive public health intervention that gave providers—typically from different clinic settings—timely, shared knowledge. It appeared to result in consistent, modest reductions in potentially dangerous prescribing practices among patients who may be more vulnerable to harm, and thus may complement ongoing efforts to address the opioid crisis."

Opioids and benzodiazepines: a dangerous combination

Opioids are medications that relieve pain. In response to a national crisis of opioid addiction and mounting evidence that highlights the potential for severe harm and questions the benefits of long-term opioid therapy, VA launched the Opioid Safety Initiative in 2013. As a result, the number of Veterans receiving opioids had decreased by 25 percent as of 2016.

Benzodiazepines are a class of psychoactive drugs, such as Valium, with sedative properties. They are used as treatment for anxiety, insomnia, agitation, seizures, muscle spasms, and alcohol withdrawal, and as premedication for medical and dental procedures.

"[The alert] appeared to result in consistent, modest reductions in potentially dangerous prescribing practices among patients who may be more vulnerable to harm...."

Opioids and benzodiazepines are the most common drug classes involved in pharmaceutical overdoses. Overdoses involving both drugs have risen significantly over the past decades. Clinical practice guidelines discourage providers from prescribing them together. Taken together, the drugs carry the potential for abuse; side effects of sedation such as respiratory depression and impaired coordination; and increased risk of both intentional and unintentional overdose or injury. These risks are higher for people with substance use disorder or severe alcohol misuse, suicide risk, and sleep apnea, as well as the elderly.

To address this potentially dangerous prescribing trend, the researchers sought to leverage VA's robust electronic medical record system to warn practitioners of the risks. In 2014, they set up system alerts within the VA Puget Sound Health Care System. The system automatically alerted the prescriber when three criteria were met: (1) the prescriber ordered benzodiazepine or opioid medication, (2) the patient already had an active prescription for the other medication, and (3) the patient was in one of the risk groups mentioned above.

Over the next year, the alert activated for 1,332 patients. In the year after the alert was put in place, cases of co-prescription at VA Puget Sound decreased by 25 percent for patients with a diagnosis of substance use disorder. Co-prescribing in the sleep apnea group dropped by 39 percent. For patients at risk for suicide, it dropped 62 percent. Among those patients who already had long-term prescriptions for both drugs, the percent filling both prescriptions fell to 69 percent six months later.

The rate of co-prescribing did not decrease for elderly patients. Co-prescribing was already significantly lower than in other risk groups for patients 65 or older before the project. The researchers think that co-prescribing for this group may already have been decreasing.

The researchers compared these numbers to those from a similar-sized VA system without the electronic medical record alert. Rates of co-prescription did not decrease in the comparison system during the one-year follow-up period, as they did in VA Puget Sound. While opioid prescriptions decreased in the comparison system, similar decreases were not seen in benzodiazepine prescriptions. Decreases in opioid prescribing may reflect VA's overall efforts to address the opioid epidemic. Additional efforts, like the alert, that target benzodiazepine prescribers may be needed to address co-prescribing, say the investigators.

The alert also may help coordination between different medical services. Opioids are usually prescribed in primary care, while benzodiazepines are more likely to be prescribed in mental health care. Since different doctors are doing the prescribing, they may need reminders of what other medications patients are receiving. Recent efforts by VA have increased the integration of mental health care into primary care. In the future, increased co-location of the two services—meaning a primary care doctor may be able to take a patient to a mental health counselor in the same building rather than referring the Veteran to a different clinic—may further aid coordination.

While integrating primary and mental health care may help, Hawkins says the type of alert his team designed can still be an important tool to bolster shared decision-making because it provides "timely, patient-specific information at the point of prescribing."

According to the investigators, more studies are needed to determine if combining this system with other interventions—such as audits and support for drug tapering and pain management—will help further reduce co-prescribing and whether such interventions help improve patient outcomes and prevent overdoses.

Efforts are now underway to roll out the alert nationwide. It has been disseminated to several VA health care systems beyond VA Puget Sound. The investigators also have collaborated with VA Pharmacy Benefits Management on developing a national alert to identify any patients co-prescribed opioids and benzodiazepines.

For more information on opioids and benzodiazepines, see the Substance Use Disorder topic page on the VA Research website.