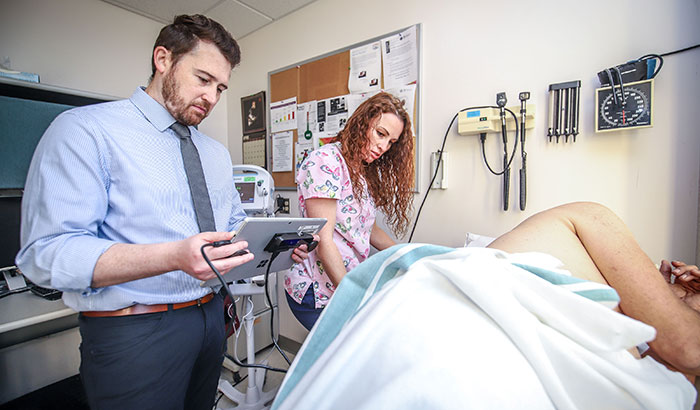 How are pressure ulcers treated?

Investigators at the James A. Haley Veterans’ Hospital in Tampa, Florida, are testing an innovative computer-based system designed to more accurately measure bedsores, also known as pressure ulcers. Accurate measurement of the wound, followed by optimal treatment, is key to preventing it from worsening.

People with spinal cord injuries are at high risk for developing pressure ulcers due to immobility, a lack of sensation, moisture, and other risk factors. Pressure ulcers are painful injuries to the skin and underlying tissue resulting from prolonged pressure on the skin. They most often develop on skin that covers bony areas of the body, such as the heels, ankles, hips, and tailbone, and they can appear due to a lack of blood flow. They can also lead to the premature death of cells in living tissue.

In general, the worse the pressure ulcer, the more advanced the wound care needed for it to heal (see sidebar). However, measurement of the wound has traditionally been based on a manual process that can lead to treatment challenges.

"This digital technique, which basically captures the whole image rather than just parts of it, is going to provide greater accuracy in measuring the wound."

“That type of measurement can’t accurately account for small improvements or deterioration over the entire surface area, and doesn’t consider changes in the wound’s depth,” says Dr.

Matthew Peterson, a research biomedical engineer at the Tampa VA who is leading the testing of the computer-based system. “Accurate pressure ulcer measurement is vital for clinicians to accurately assess the severity of the wound and the degree of tissue damage, and to determine whether current treatment strategies are effective. If the size of the pressure ulcer has been shrinking over time, the wound is healing. But if the size stays the same or increases, the treatment may not be effective and may need to be modified. Therefore, effective treatment depends on reliable and valid measurements of the pressure ulcers. Intervening early to prevent them from worsening is critical for improving patient outcomes and reducing costs.”

Peterson is testing a technology that’s designed to be more objective and reliable than the popular spinal cord injury pressure ulcer monitoring tool (SCI-PUMT), a manual system. His instrument’s strength is its ability to capture 3D images with a camera mounted to a tablet. An algorithm uses the color, geometry, and formation of the wound to assess its length, width, and depth. 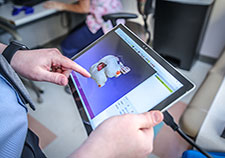 He explains, for example, that because pressure ulcers can be shaped irregularly, the spot where the depth is marked in a manual system may not be the deepest point in the wound. His instrument is designed to more accurately mark that point. 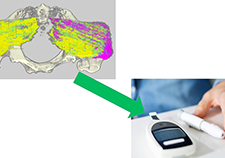 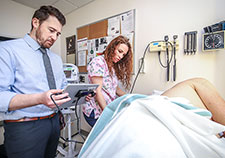 Peterson says, clinical implementation of SCI-PUMT has been slow because it’s a “paper and pencil” tool that calls for measurement of the wound by hand, as well as manual computation of the score and extensive training to ensure correct use. His technology measures the wound almost automatically and doesn’t require extensive training. The wound care nurse holds the tablet and takes the picture. The software let the nurse know when the image is in focus, so a proper picture is taken. Peterson says it’s a “semi-automated” process.

VA recommends implementation of SCI-PUMT in its spinal cord injury centers. But Peterson isn’t certain to what extent it’s used in those facilities.

Spinal cord injuries (SCI) affect nearly 300,000 people in the United States, with more than 15,000 new cases each year. Many Veterans are battling such injuries as a result of combat experiences and accidents in other settings. These injuries can result in paralysis, a loss of feeling, chronic pain, and other serious medical problems below the site of injury.

Researcher hopes tool will be implemented in VA

Peterson and his colleagues are collaborating with the University of South Florida to perfect the new technology. The researchers are halfway through the enrollment process in a study to assess the effectiveness of the system, compared with manual pressure ulcer measurements.

Only Veterans with spinal cord injuries are being enrolled. Thus far, the research team has recorded measurements of about 40 pressure ulcers from more than 30 Veterans. (Some participants have more than one wound.) The researchers hope to measure 70 pressure ulcers overall.

In one lab experiment, Peterson’s team used the technology to measure bedsores on training mannequins. They tested two bedsores 50 times each, concluding that the instrument “demonstrated accurate and precise automated measurements.” The error rates were two to three millimeters for length, up to one millimeter for width, and one to two millimeters for depth. Those errors were as good as or better than the reported manual measurement errors, according to Peterson.

Peterson presented the results at World Conference on Advanced Treatments & Technologies in Wound Care in London in 2018.

To validate that the system would work with real wounds, the research team carried out a study involving eight Veterans with spinal cord injury. In comparison to manual, ruler-based measurements taken by trained nurses, the average errors with the monitoring system were three millimeters for length, three millimeters for width, and four millimeters for depth. All of the errors were small enough to allow the researchers to move on to the next phase of the study, Peterson says.

Results from the trial were presented at a conference of the International Society for Optics and Phototonics in February 2019.

Peterson began researching pressure ulcers during his doctoral studies at the University of Florida more than a decade ago. He eventually earned a Department of Defense research award to experiment with the computer-based pressure ulcer monitoring system.

Peterson and his team hope to expand on this research if the evaluation and feasibility studies go as expected. Successful testing of the instrument in a clinical setting means it will likely be available for use in VA spinal cord injury clinics, he says.

“Getting the system implemented in VA is the goal, so it can benefit all Veterans with spinal cord injury,” he says. “Also, we believe our system could be readily applied in the general population, not just people with spinal cord injury. Furthermore, we’d like to ultimately make this system available to lay providers, not only clinicians, for use in a home care setting. More research is needed to evaluate the clinical effectiveness of this tool for pressure ulcer monitoring, along with continuous improvement of the technology. We have more work to do.”

How are pressure ulcers treated?

What’s the best way to treat a pressure ulcer? It’s a complex question, with a series of options that are dependent on the size and severity of the wound.

Dr. Linda Cowan, a nurse researcher and pressure ulcer expert at the James A. Haley Veterans’ Hospital in Tampa, Florida, is a co-investigator on Dr. Matthew Peterson’s work to develop a computer-based pressure ulcer measurement system (see main story). She explained how pressure ulcers are treated: