Study: Symptoms of 'chronic multisymptom illness' may be common in Iraq, Afghanistan Veterans 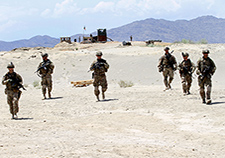 Army soldiers take part in a training exercise on Tactical Base Gamberi in eastern Afghanistan in 2015. Emerging research suggests a majority of Iraq and Afghanistan Veterans have symptoms consistent with a condition known as chronic multisymptom illness. (DoD photo)

Army soldiers take part in a training exercise on Tactical Base Gamberi in eastern Afghanistan in 2015. Emerging research suggests a majority of Iraq and Afghanistan Veterans have symptoms consistent with a condition known as chronic multisymptom illness. (DoD photo)

In a VA study of more than 300 enlisted Army National Guard and Army Reserve members who had deployed to Iraq or Afghanistan, a majority reported symptoms consistent with a condition known as chronic multisymptom illness (CMI). The data were collected a year after the soldiers returned home.

The results suggest that deployment to these conflicts could trigger symptoms consistent with CMI. The ailment presents as a combination of medically unexplained chronic symptoms, such as fatigue, headache, joint pain, indigestion, insomnia, dizziness, breathing problems, and memory problems.

The study, by researchers with VA's War-Related Illness and Injury Study Center (WRIISC) in New Jersey, appeared online Feb. 22, 2016, in the Journal of Rehabilitation Research and Development.

"As a whole, CMI can be challenging to evaluate and manage."

"As a whole, CMI can be challenging to evaluate and manage," said lead author Dr. Lisa McAndrew. "CMI is distinct from PTSD or depression. It contributes to significant disability."

McAndrew is also with the University at Albany.

In the Veteran community, chronic multisymptom illness has previously been associated mainly with service during the Persian Gulf War in the early 1990s. At least a quarter of those Veterans are affected. 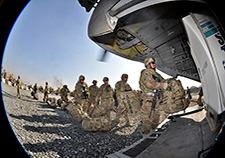 Experts aren't sure, though, if that condition is the same one that has emerged among more recent Veterans, as documented in the newest WRIISC study and one or two earlier ones. Last year, for example, researchers with the Millennium Cohort Study reported that about a third of combat Veterans who served in Iraq and Afghanistan had CMI symptoms.

"This condition appears to be similar to that experienced by many Gulf War Veterans, in terms of the symptoms, but we don't really know if it's the same condition," says McAndrew. "That still requires study."

Rates of CMI higher after deployment

McAndrew and her colleagues surveyed 319 soldiers about their overall health before they deployed and one year after they returned. The VA team found there were 150 soldiers who did not report many symptoms before they deployed but who reported symptoms of CMI one year after deployment, suggesting a link between deployment to Iraq or Afghanistan and CMI.

Not surprisingly, the researchers found that Veterans who screened positive for CMI scored significantly lower on measures of physical and mental health function.

The finding underscores the strong link between chronic pain and CMI, say the researchers.

The study also found that almost all Veterans with PTSD symptoms also showed signs of CMI—about 98 percent. Only seven patients had PTSD and did not meet the criteria for CMI. In contrast, though, about 44 percent of the Veterans with CMI did not have PTSD. In other words, the link between PTSD and CMI was not as robust as that between chronic pain and CMI.

The authors caution that the study looked only at pain and PTSD as factors tied in with CMI. It did not document other conditions that could possibly account for the symptoms of CMI, such as depression, traumatic brain injury, and substance abuse. At the same time, they say these other conditions are unlikely to completely account for the frequency of symptoms seen in the study.

By the same token, other conditions not examined in the study, such as arthritis or multiple sclerosis, could cause symptoms similar to those of CMI. More research is needed to tease out those variables.

Another limitation of the study: The research team used a definition of CMI, established by the Centers for Disease Control and Prevention (CDC), that is based on Gulf War Veterans. They say it might not exactly fit the symptoms of Veterans of the more recent conflicts.

Also, it's unclear whether the Guard and Reserve members surveyed in the study are representative of the larger Veteran or military cohort who deployed to Iraq and Afghanistan.

All in all, the research team advises that the results be interpreted with caution.

"We're taking the approach that an abundance of caution is necessary in the clinical implications of the findings," says McAndrew. "Respondents self-reported symptoms on pen and paper surveys. The symptoms were not confirmed or evaluated by a clinician. While the CDC case definition is fairly clear-cut, in clinical practice there is a lot of gray area around applying the label of CMI. We used the term 'symptoms consistent with CMI' to indicate the uncertainty due to the self-reported, clinician-unverified nature of the classification."

Pending further research on the topic, McAndrew's group says clinicians in VA or other settings should consider CMI when evaluating Iraq and Afghanistan Veterans, especially those with chronic pain. Once the condition is identified, clinicians in VA and the Department of Defense do have a clinical practice guideline for managing the condition.

"Acknowledging the presence of multiple symptoms and taking a holistic approach to achieving patient goals is critical in managing CMI," says McAndrew. For example, pain management may need to be tailored to account for other symptoms of CMI.

The WRIISC study notwithstanding, McAndrew says not enough attention has been focused on the issue to date.

"There have been few studies of CMI among Iraq and Afghanistan Veterans. Our findings suggest this could be an overlooked problem."