Cardiac rehab has been shown to benefit heart patients in numerous ways, but only about a fifth of those eligible take advantage of it. (Photo for illustrative purposes only. ©iStock/juanmonino)

Cardiac rehab has been shown to benefit heart patients in numerous ways, but only about a fifth of those eligible take advantage of it. (Photo for illustrative purposes only. ©iStock/juanmonino)


Cardiac rehab? There's an app for that.

Actually, more than one. But one now in development at the VA Puget Sound Health Care System will stand out from existing products because it targets VA patients—namely, those with a recent heart attack or other heart problem who are undergoing a medically supervised exercise and lifestyle program.

"The unique thing about VA FitHeart is that it is specifically for Veterans and will send its data to the new VA Patient Generated Database," says project lead Dr. Alexis L. Beatty, a cardiologist and health services researcher with VA and the University of Washington.

"The unique thing about VA FitHeart is that it is specifically for Veterans and will send its data to the new VA Patient Generated Database."

She adds, "There are several apps that can serve as companions to cardiac rehabilitation programs—these have mostly been designed as commercial care management platforms targeted at providers, hospitals, and health systems."

Beatty, who holds an undergrad degree in biomedical engineering, points out that while there are glut of general fitness apps on the market, they do not address the specific needs of cardiac rehab patients.

"Cardiac rehab has many components to it that go beyond tracking that make tailoring for the patient population desirable," she says.

Furthermore, most are not theory-based. That's a problem, asserts the researcher.

"Much of the available evidence suggests that apps that do not have components that are theory-or evidence-based do not work." 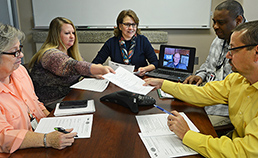 By all accounts, cardiac rehab is good medicine for those who have survived a heart attack or undergone a heart procedure, or who are coping with a chronic condition such as congestive heart failure. Patients go to a gym where they exercise under medical supervision. They also get education and counseling about healthy eating and stress reduction.

For VA patients unable to participate at a cardiac rehab center, the VA Office of Rural Health has a "Promising Practices" program of home-based cardiac rehab at certain sites.

According to the American Heart Association, cardiac rehab lowers death rates, eases symptoms such as fatigue or chest pain, and boosts exercise performance.

But studies show that fewer than 20 percent of eligible patients take advantage of cardiac rehab. The reasons vary. Beatty believes her team's app will help, at least in VA.

"My hope is that efforts to make cardiac rehabilitation more attractive and accessible to patients will improve participation rates and patient outcomes," she says. She cites an Australian study that showed better participation and completion—and equal outcomes, in terms of exercise capacity—with app-assisted versus traditional cardiac rehab.

The new VA app has four main screens: goal setting, logs, health education, and reminders. So far, Beatty's team has tested it only among a dozen or so Veterans. The goal was to get an initial idea of feasibility and usability, and to work out some initial design kinks. In some cases, standard app design features needed to be tweaked.

"The plus sign [+] in the upper right hand corner is standard for adding something such as an entry or contact," explains Beatty. "However, patients had difficulty recognizing that this was how they were supposed to add a fitness entry. So we had to create a button that was easier to see so that they could make an entry. With this change, we went from people not being able to complete this task, to people being able to do so." The new button has the words "Add an Activity" alongside the plus sign.

The team is preparing the product for wider field testing later this year. Veterans will use it for one month on their phones or tablets and provide feedback. Beatty says, "If the app passes field testing, it will be nationally released for use across the United States."

Beatty's main collaborator on VA FitHeart is Dr. Mary Whooley at the San Francisco VA Medical Center. VA FitHeart was spearheaded by VA's Office of Connected Care, with programming by software developers with the VA Office of Information and Technology. Funding for the study of the app came from the Virtual Specialty Care QUERI.

Beatty also now has funding from VA Health Services Research and Development to study the implementation of VA FitHeart along with a companion app for providers, now in development. That app will allow providers to view the patient data and generate a report for VA's electronic health record system.

Screenshots of VA FitHeart, a mobile application for cardiac rehabilitation.