Reckless behavior fuels ongoing stress for some with PTSD 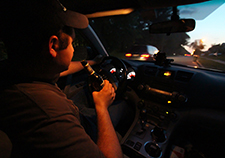 Drunken driving and other reckless behaviors appear to be common among those with PTSD, and could in turn lead to more stress and trauma and worse PTSD symptoms, suggests a VA study. (Photo by Mitch Mirkin)

Drunken driving and other reckless behaviors appear to be common among those with PTSD, and could in turn lead to more stress and trauma and worse PTSD symptoms, suggests a VA study. (Photo by Mitch Mirkin)

Researchers with the National Center for PTSD at the VA Boston Healthcare System found that engaging in risky behavior—itself a symptom of posttraumatic stress disorder—could in turn lead to worse PTSD symptoms. This sets up a pattern of repeated stressful experiences, they say, that could have harmful consequences for those with PTSD.

As Dr. Naomi Sadeh, corresponding author on the article, explains: "For individuals with PTSD, exposure to new stressful events will often prolong their symptoms and can even make them worse. So these findings suggest that treatment providers should ask trauma-exposed Veterans about reckless behavior to make sure they are not engaging in harmful behaviors that could make their PTSD symptoms worse."

The results appeared in a May 2017 issue of the Journal of Traumatic Stress.

"Understanding how reckless behaviors relate to the maintenance of PTSD symptoms is an important area of study."

Risky behavior as a symptom of PTSD

Recent research has found evidence of a link between risky behavior and PTSD. Because of this relationship, "reckless and self-destructive behavior" has been added as a symptom of PTSD in the fifth edition of the Diagnostic and Statistical Manual of Mental Disorders, the handbook used to diagnose psychiatric conditions.

The new study assessed more than 200 Veterans with PTSD diagnoses for both PTSD severity and reckless behavior at the beginning of the study, starting in 2006, and again four years later. Nearly three-quarters had engaged in reckless or self-destructive behavior at least once in the five years before the study.

The most common behaviors identified in this study were dangerous alcohol or drug use, drunken driving, gambling, and aggression. The researchers found a correlation between risky behavior and higher PTSD severity at both time points. The results lend further evidence that risky behavior is common among trauma-exposed Veterans.

"These types of high-risk behaviors appear to be common among Veterans who have experienced trauma, and put Veterans in harm's way by making it more likely that they will experience stress and adversity in the future," says Sadeh.

But the study revealed more about the relationship between PTSD and risky behavior. In the time between the two tests, 82 percent of participants experienced at least one potentially traumatic event. These events included experiencing the sudden death of a friend or loved one; being threatened with or being the victim of a physical assault; being involved in a motor vehicle accident, or witnessing any severe accident; experiencing a life-threatening or disabling event affecting a loved one, or coping with a life-threatening illness.

Not only did the presence of risky behavior at baseline correlate with future PTSD symptoms, but it was also tied to the likelihood of experiencing new traumatic events. This led the researchers to suggest that risky behavior may lead to worse PTSD symptoms in the future by leading to a greater number of stressful life events. The findings suggest that many Veterans with PTSD continue to experience stressful events that may prolong or worsen their PTSD symptoms, even years after the initial trauma.

The study authors write, "Driving while intoxicated, for example, increases the likelihood of experiencing a traumatic motor vehicle accident, overt aggression can elicit assaultive behavior from others, and drug use can increase exposure to drug-related crime and physical injury." In other words, risky and harmful behaviors could lead to more trauma and, in turn, worse PSTD over time.

The results are of particular interest to VA. In addition to having much higher rates of PTSD, Veterans are also more likely to engage in risky behavior. Veterans are at around 50 percent higher risk of suicide than civilians. They are also more frequently incarcerated for violent offenses and more likely to drive recklessly. Veterans also have higher rates of binge drinking and pathological gambling than their non-Veteran counterparts.

VA and other health care systems need to focus on more assessment and treatment of problematic behavior in trauma-exposed individuals, say the researchers. They write, "Considering the number of Veterans who have been diagnosed with PTSD and are reintegrated into society, understanding how reckless behaviors relate to the maintenance of PTSD symptoms is an important area of study."

This study was funded by a VA Clinical Science Research and Development Program award to Dr. Mark Miller and a Career Development Award to Dr. Erika Wolf.