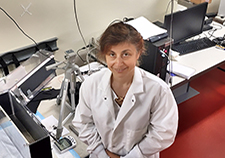 Dr. Almira Vazdarjanova is a neuroscientist at the Charlie Norwood VA Medical Center in Augusta, Georgia. (Photo by Jason Tudor)

Dr. Almira Vazdarjanova is a neuroscientist at the Charlie Norwood VA Medical Center in Augusta, Georgia. (Photo by Jason Tudor)

Researchers at the Charlie Norwood VA Medical Center and Georgia State University have shown, using rats, that inflammatory pain at birth changes how the hippocampus works later in life. The change leads to eating more frequently, and in larger amounts.

Recent studies by the same group and others suggest that memory is related to eating habits. Researchers have found that when people don't remember a meal as well—for example, because they were distracted by watching television—they eat more at the next meal. It appears that creating memories of a meal is related to signals sent within the body that the person is full and doesn't need to eat more. The new study further explored this link and showed that a single instance of pain may change how the hippocampus forms memories and therefore alter eating habits for a life span.

"It is somewhat shocking that a single inflammatory event at a critical developmental period can have such lasting influences throughout life."

Dr. Almira Vazdarjanova, one of the study authors and a researcher with the Charlie Norwood VA Medical Center in Augusta, Georgia, says, "It is somewhat shocking that a single inflammatory event at a critical developmental period can have such lasting influences throughout life."

The results appeared in a May 2017 issue of Physiology & Behavior.

The hippocampus is the region of the brain involved in the creation of episodic memories. Evidence is emerging that the hippocampus is also involved in energy regulation. When people don't form a strong memory during a meal, they are more likely to eat again sooner, and to eat more. Patients with memory problems such as amnesia often eat more because they do not remember how much they ate at the last meal or when they ate last.

Earlier work by the researchers showed this link in rats. They found that eating sweet food increased the expression of the activity-regulated cytoskeleton-associated (Arc) protein by hippocampal neurons. Arc protein is a marker of synaptic plasticity, a process necessary for making new memories. 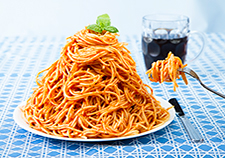 New research suggests that a single instance of pain may change how the hippocampus forms memories and therefore alter eating habits for a life span. (Photo: ©iStock/diane555)

New research suggests that a single instance of pain may change how the hippocampus forms memories and therefore alter eating habits for a life span. (Photo: ©iStock/diane555)

When hippocampal functioning is impaired, both humans and rats tend to eat more. Another 2017 study by the same research team showed that suppressing the activation of hippocampal neurons in rats caused them to eat more of a sucrose solution and also to return for feeding more frequently. When these neurons are less active, the rats eat more.

The new study took a closer look at the relationship between the hippocampus and eating habits. The researchers caused inflammatory pain in the paws of rats on the day of their birth. They then looked at how this affected the frequency of the rats' consumption of a sucrose solution and how much they ate at each feeding.

The results showed that both male and female rats that had experienced neonatal pain ate more of the sucrose solution at each meal than rats not subjected to pain. The female rats subjected to neonatal pain also showed fewer cells expressing Arc when consuming the sucrose, showing that their hippocampi were functioning differently. The decrease in Arc expression means that fewer neurons were involved in encoding the memory, explains Vazdarjanova. 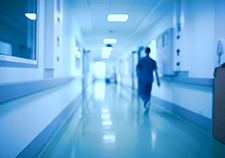 The researchers also treated some of the rats with morphine after subjecting them to inflammatory pain. Rats that had been given morphine did not show the same eating increases as pain-inflicted rats that were not treated. These results together suggest that the changes in eating behavior were due to the actual experience of pain. It appears that a single instance of inflammatory pain early in life promoted the consumption of pleasing food and disrupted the formation of meal-related memories later in life.

Although the study involved only rats, it has implications for how memory and eating are related in humans as well, say the researchers. The newborn rats used are comparable to a third-trimester human infant in terms of brain development. Thus, inflammatory pain on the day of birth for the rats can be used as a model for premature human infants born into a neonatal intensive care unit (NICU). Premature babies in the NICU often undergo multiple painful procedures every day. Many of these procedures are performed without analgesia, or pain relievers. Studies have shown that premature infants are more likely to develop obesity later in life. The findings of this study could explain why that is. It may be that early-life stress and trauma experienced in the NICU lead to eating more pleasing foods (i.e., sugar) later in life, the researchers explain.

While both male and female rats inflicted with neonatal pain consumed larger sucrose meals, the results were not uniform across both sexes. The female rats in the pain group not only consumed more during each meal, but also returned to the sucrose feeding tube sooner after a meal. This could mean that they felt less sated by the previous meal because of the disrupted hippocampal function.

The researchers suggest that females are more vulnerable to the effects of neonatal pain than are males. This difference could be related to hormone changes. Male rats experience a surge of testosterone—which is converted into the hormone estriadol—around their 18th day of life. Female rats do not experience a similar hormone change. Estriadol has been shown to convey neuroprotection against a number of brain insults. This hormone surge may protect males from some of the adverse effects of the neonatal pain.

Taken together, the results suggest that inflammatory pain experienced by infants in the NICU may contribute to obesity observed in that population. Preventing pain in NICU infants may help reduce the risk of obesity later in life, especially for females, say the researchers. Vazdarjanova explains that more research is needed to understand how and when these changes in the hippocampus affect later behavior: "As is the case for many 'sensitive periods,' this phenomenon may be restricted to early life. However, more research will need to be done to uncover the duration of this period and the factors that guide its 'opening and closing.'"

The relationship between trauma and the hippocampus may have implications beyond altered eating habits. According to Vazdarjanova, "a possible implication of the research...is that early life inflammatory pain [may] increase susceptibility to PTSD, with the underlying mechanism being suppressed Arc expression in the hippocampus." Previous VA-funded work by Vazdarjanova and colleagues has shown that rats with a poorly functioning hippocampus are more susceptible to emotional trauma than rats with normal hippocampal function. Arc expression therefore could possibly be used to predict risk for PTSD before trauma actually occurs.

The study was funded by a VA Merit Award and grants from Georgia State University, the Chi Omega Foundation, and the National Science Foundation.