In the VA system, maternity care is almost entirely provided by community obstetricians but paid for by VA. (Photo:©iStock/Jovanmandic)

In the VA system, maternity care is almost entirely provided by community obstetricians but paid for by VA. (Photo:©iStock/Jovanmandic)

Nearly 10 percent of former U.S. military members are women. Many of these women are of reproductive age—45 or younger—resulting in a steep increase in the number of Veterans delivering babies who have used VA maternity benefits in recent years.

In the VA system, maternity care is almost entirely provided by community obstetricians but paid for by VA. Veterans are encouraged to go to private facilities for services such as prenatal screenings, labor and delivery, and postpartum care.

Yet, little is known about how women Veterans access and use maternity care during pregnancy and following childbirth. Researchers are thus undertaking one of the most comprehensive VA studies yet of women's maternal health care issues. It is intended to give a broad assessment of pregnancy and maternity care among female Veterans, with a focus on obstetrics and mental health treatment, and on challenges receiving care from VA and private providers.

Dr. Kristin Mattocks, associate chief of staff for research and development at the VA Central Western Massachusetts Healthcare System, is leading the VA-funded study. She and her colleagues are two years into the research, with about a year to go.

"The number of women Veterans delivering babies using VHA maternity benefits has nearly doubled in the past five years," Mattocks says, "and yet virtually nothing is known about how they access and use maternity care services, how their maternity care is coordinated, or how ongoing VHA care, including primary care, specialty care, and mental health care, is managed during and after pregnancy. Coordinating maternity care with ongoing VHA care for pregnant Veterans is crucial because many women using VHA care have complex medical and mental health conditions that may increase their risk for adverse pregnancy outcomes."

"The number of women Veterans delivering babies using VHA maternity benefits has nearly doubled in the past five years."

The researchers seek to enroll 500 women in the study and track them during pregnancy and postpartum. They've signed up nearly 300 thus far from 13 VA medical centers located in a combination of urban and rural areas. The 300 have been interviewed at 20 weeks of pregnancy about their physical and mental health status, and about any history of military sexual trauma or problems finding a community obstetrical provider. There's also screening for drug and alcohol use and domestic violence.

About half of the 300 women have given birth during the course of the program. The mothers are being interviewed at 12 weeks postpartum to assess potential labor and delivery complications, perinatal depression, and infant health status. They are also asked if they've had social support to care for the baby and about child bonding. 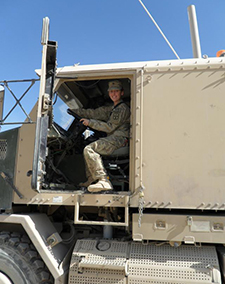 Mattocks, also an associate professor of quantitative health sciences, psychiatry, and family medicine at the University of Massachusetts, says her team has collected "great information" so far, including testimonials from women who think they have no access to VA benefits during pregnancy. "That's just not true," she says. "So we have to fill in some information gaps."

Mental health is of special interest to the researchers. Depression, pain, and PTSD are common conditions among women Veterans using VA care that may call for ongoing treatment during pregnancy. Nearly 50 percent of the pregnant women in the study have been diagnosed with depression and 34 percent with PTSD, Mattocks says.

"Those numbers are certainly higher than civilian numbers," she says. "I don't think you'd ever find a sample where 49 percent of pregnant women have a history of depression and certainly not 34 percent PTSD." She notes that only about 12 percent of the 150 women who have given birth are suffering depression, a statistic that "seems pretty consistent at this point with non-Veterans. But we're still aiming to learn more about that once we get more women in the study."

A key part of the study analyzes the challenges women face in accessing non-VA obstetrical care. Ninety percent of the women in the study are using VA maternity benefits, so VA paid for their treatment. VA covers the costs for prenatal care, labor and delivery, and postnatal care, as well as care to newborns for the first seven days after birth. For the most part, doctors do not perform these services at VA facilities, mainly because not enough female Veterans are having babies to warrant doing so.

In an effort to ensure that women Veterans receive access to high-quality maternity care during their pregnancies, VA policy requires a designated maternity care coordinator (MCC) at each facility to help organize pregnancy care.

"From the moment the woman is pregnant, the maternity care coordinator can help them find an appropriate obstetrician in the community," Mattocks says. "It turns out we have women who are homeless, and we have women who are suffering from intimate partner violence, so this VA person is supposed to really help them out with maternity care coordination. That's the program we need to continue to enhance to make sure that that coordination continues during the postpartum period, especially if women are going to end up suffering less postpartum depression and have other issues." 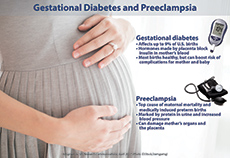 One Veteran who has taken advantage of VA maternity care benefits is Samantha Carrera, an Army Veteran who did a tour in Afghanistan. During her second pregnancy, she was referred to a community-based prenatal care provider after personnel at the Chalmers P. Wylie VA Ambulatory Care Center in Ohio performed prenatal screening blood work to confirm her pregnancy. The facility's MCC also made sure Carrera received postpartum supplies paid for by VA, such as a breast pump and nursing bras.

"VA made me feel comfortable during my second pregnancy," says Carrera, who didn't take part in Mattocks' study. "VA doesn't completely emphasize maternity care but the resources are there. A lot of the nurses had experiences with prenatal care but weren't able to perform everything necessary. I was advised to go to a civilian doctor sooner rather than later, so I could get to know my doctor."

To pay for her private care, Carrera tried using the Veterans Choice Program, a VA initiative that covers costs for privately administered health care. The program allows Veterans to seek medical care in the community if they are on a waiting list beyond 30 days at their local VA facility and live at least 40 miles from the closest VA site.

Carrera praised the Choice program because it helps extend services for Veterans. But she also experienced challenges accessing care through the program.

In recent years, Mattocks says, VA medical centers have turned more to recommending Choice for private maternity care. She says a VA facility will direct a woman to a Choice provider if it has determined there are enough obstetricians enrolled in that community.

Does Mattocks expect the findings in her study to influence any VA policy changes?

"I hope the study demonstrates the need to continue to focus on the needs of pregnant Veterans, and on the importance of coordinating VA and non-VA care," she says.

Along with the research described above, a number of ongoing VA research projects aim to learn more about VA maternity care and how to improve treatment for pregnant and postpartum Veterans.

Katon, an epidemiologist, is working to understand access, use, and outcomes of VA maternity care, including newborn outcomes such as preterm birth. Researchers are developing survey questions to determine if Veterans have optimal access to VA care, and if not what barriers need to be addressed to improve access. Some of the questions will compare behaviors such as smoking during pregnancy between Veterans and non-Veterans.

The investigators plan to interview VA maternity care coordinators and other stakeholders to learn of possibilities for assisting pregnant Veterans. Options include online programs to help reduce alcohol use and smoking during pregnancy, and efforts to help women lose weight after birth.

Callegari thus collaborated with women Veterans, VA providers, and scientists to develop a support tool called "MyPath." It provides educational and other details to help women make informed decisions about pregnancy and contraception. She hopes the tool will improve Veterans' knowledge and self-efficacy, and their ability to communicate with PCPs and to optimize their health before pregnancy and use contraception effectively. She plans to pilot test "MyPath" in the fall of 2017.

Another VA researcher, Dr. Ciaran Phibbs, is a health economist at the VA Palo Alto Health Care System in California. He has been funded to combine VA and non-VA databases and distinguish effects of military service on birth outcomes, including rates of prematurity. Phibbs is in the early stages of the research, which is also looking at whether Veterans are using private insurance, Medicaid, or another type of coverage to supplement their VA pregnancy care.