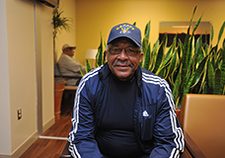 Navy Veteran Pernell Baker is a patient at the Washington, DC, VA Medical Center. VA patients like him took part in "guided tour" research at other VA sites to let researchers know their thoughts and feelings about the care they receive. (Photo by Robert Turtil)

Navy Veteran Pernell Baker is a patient at the Washington, DC, VA Medical Center. VA patients like him took part in "guided tour" research at other VA sites to let researchers know their thoughts and feelings about the care they receive. (Photo by Robert Turtil)

Seeing VA medical centers through the eyes of the Veterans who come there for care—that was the goal of recent research by a VA team.

The researchers used guided tours, given by the patients themselves. Thirty Veterans took part. Each one individually gave a tour, taking a researcher around the medical center for about 30 to 45 minutes.

The approach is new in health care settings.

"I've seen this method used in community-based research, looking at things like how navigable a neighborhood is for residents, or whether there is enough green space. But I hadn't seen it used before in health care systems," says Locatelli, with the Center of Innovation for Complex Chronic Healthcare, based at the Hines (Ill.) VA Hospital.

Locatelli and colleagues Dr. Sherri LaVela and Stephanie Turcios will present the work at a July 2015 national meeting of VA health services researchers. The team previously published the study, and a related one based on guided tours by VA health care providers and other employees, in the Patient Experience Journal and Health Environment Research and Design Journal.

Comments on everything from wall color to waiting time

Locatelli says she came upon the guided-tour method when her group was developing a proposal for VA's Office of Patient-Centered Care and Cultural Transformation. The group, under LaVela's direction, was eventually funded to study two VA pilot sites where a suite of changes were underway, aimed at making VA care more patient-centric.

Those changes covered everything from the color of patient on the walls—the goal being to use more soothing, calming hues—to the physical layout of clinics, to the routines that patients would go through on their visits.

The guided tours yielded frank comments from Veterans on all of the above.

"I feel good about going through most areas, especially up and down the corridor and around the [cafeteria]," said one participant. "[In] the Atrium, there's plenty of light."

But said another: "Typically the lobby is full of a bunch of people...People on top of people...It is overwhelming when you come through here because you don't know where you are going."

The researchers audio-recorded the tours as they followed along, asking follow-up questions and posing the occasional open-ended query. They later coded and analyzed the Veterans' remarks, paying close attention to the emerging themes.

Many of the "tour guides" commented on the signage around the medical center.

"In terms of getting around, everyone—Veterans and employees alike—had comments on signs in the facility," says Locatelli. "They often had problems with the signs, especially when they were too small or contained a lot of information, or weren't up to date. As part of patient-centered care, there has been a lot of reorganization of clinics, but the signs haven't always been up to date. So people could get confused and lost."

Veterans' confusion could also stem, in some cases, from changes to the process of care. Locatelli shares an example:

"Veterans and employees alike talked about the complicated processes around receiving prescriptions. At some facilities, what you do is you go in and see your primary care provider. If they write you a prescription, you first go wait in this line to talk to a pharmacist, right in the primary care clinic. That's to tell you about interactions, to see if you have any questions—standard pharmacist counseling. After that, you go to a completely different area of the hospital, where the pharmacy is, to pick up the prescription."

The problem was, says Locatelli, that "some people who didn't realize that the pharmacist wasn't in the pharmacy. So they immediately went from the primary care clinic to the pharmacy and sat there for 20 or minutes before asking someone 'when is my prescription going to be ready?' And it was only at that point that they learned they had missed a step."

Even some providers—those writing the prescriptions—weren't aware of the correct procedure, says Locatelli. "They were erroneously telling Veterans, 'OK, I sent the prescription, you can go to the pharmacy to pick it up.' They didn't know the Veteran was supposed to first talk to a pharmacist in the primary care clinic."

Those types of insights, gleaned from the guided tours, could be valuable nuggets for clinic or medical center directors, says Locatelli. They might want to rethink the process, or perhaps ensure that patients—and providers—are better informed.

Non-researchers may be able to use method

She says qualitative research such as focus groups or the guided-tour method typically involves small samples—in this case, 30 Veterans and 25 employees—and may not be generalizable in the same way that large surveys or database studies might be. However, the research can point to "relationships between variables that you can then further explore in a quantitative way," says Locatelli. For example, some findings from the guided tours might be useful items for medical centers to include in patient surveys.

For that matter, health care managers may be able to harness the power of guided tours for their own sites, even without the formal expertise of trained researchers.

"For the most part, it's about listening, keeping on your toes, and being able to ask timely follow-up questions on the fly. There are lots of people who have that skill set," says Locatelli.

"If I am the director of a primary care clinic," she adds, "and I want to do these guided tours with some of my patients, I am probably going to be familiar enough with the particular environment and processes to be able to come up with some pretty good follow-up questions. Of course, I would have to be careful to not ask the questions in a biased way that is going to push people toward answering in a certain way."

One especially noteworthy theme that came up in the guided tours was Veteran identity. By and large, says Locatelli, Veteran patients expressed a strong sense of identity with their fellow Veterans—and, by extension, with VA.

"They identified themselves as Veterans—that's an important part of who they are—and they see their receiving care through VA as an extension of that identity. They said things like, 'Even though there are problems—the wait times can be long sometimes—this is the best place for me for the issues I have.' They talked a lot about camaraderie—just sitting in the clinic and knowing they could turn to anyone around them and talk to them, and relate to that person.

"Working in the VA, it wasn't surprising, because we see those interactions on a daily basis," says Locatelli. "But it was neat to hear them articulate that."