Training the next generation of nurses: Studies highlight success of VA's partnership with nursing schools 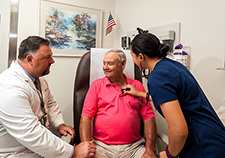 Nobody wants a urinary catheter inserted. But if you need the procedure, you want it done right.

Nursing instructor Dr. Randy Moore says his VA site and others are ahead of the curve in using a new type of swivel clamp that helps secure the catheter. One benefit? Lower infection risk. He is passing along the technique to his students.

"This is something that many nursing students don't get any hands-on practice with. Here, they do. So our students are learning the latest and greatest through their clinical experience at the VA." 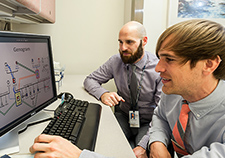 Moore, based in Birmingham, Ala., is in the vanguard of nursing education. He is part of a program called VANAP, for VA Nursing Academic Partnerships. Now in its second year, following a multiyear pilot phase, it builds on existing partnerships between VA medical centers and nearby nursing schools. Schools selected to take part—there are now 25 active sites nationwide—get support from VA to beef up their enrollment and develop their Veteran-centered curriculum.

VA's Office of Academic Affiliations provides seed money the first five years to aid in implementation and growth. Afterward, the partnerships support themselves through internal funding from the local VA and its affiliated nursing school.

Either way, students get an intensive and well-coordinated clinical experience in VA, tightly focused on Veterans' care.

In turn, as shown in studies, VA reaps a range of benefits. They include enhanced recruitment and retention of nurses, and an upsurge in evidence-based nursing practice. The staffing piece is big: Amid a nationwide shortage of nurses, VA has felt the pinch, with 4 in 10 VA nurses eligible to retire within the next couple of years.

One recent evaluation, published in May 2015 in the journal BMC Nursing, looked at the pilot version of VANAP, called the VA Nursing Academy (VANA). The study found positive "spillover" effects from the five-year program on VA staff nurses who worked on clinical units alongside students. For starters, only 20 percent of these nurses perceived the presence of students as making their work more difficult. Most felt no extra burden—a finding that contrasts with past studies on nurse training at large.

What's more, the more involved the VA staff nurses were with the training, the greater their job satisfaction.

"Greater interaction with the students, more information on the program, and a preceptor [teacher] role were all...associated with greater program satisfaction," wrote the study authors, from VA, RAND Corporation, and UCLA. Dr. Aram Dobalian led the evaluation.

Coauthor Dr. Tamar Wyte-Lake, a VA health services researcher in Los Angeles, says some VANA sites had "dedicated education units" where almost every VA nurse became a teacher, in essence, at least part of the time.

"Basically everyone on the unit becomes part of the teaching team," says Wyte-Lake. "It becomes a very intense experience."

Chenoa Leopard just finished her four-year nursing degree and passed her RN licensing exam. She is now hoping to come on staff at the Birmingham VA, where her husband, a Navy Veteran, receives care. She attests to the rigor and efficiency of the VANAP experience from a student perspective.

"One benefit was that we got to have consistent clinical groups and site locations. Since we were already familiar with our clinical group and site each semester, we were able to begin patient care right away."

According to the research, that type of cohesiveness makes a difference not only for the students, but for the VA nurses who work with them. The effect is further enhanced when the VANAP faculty are themselves part of the VA nursing staff. That doesn't always happen—VANAP faculty are sometimes recruited from outside VA—but it often does.

Wyte-Lake: "In some situations in nursing education, students are just 'dropped off' at their unit. And the staff aren't really told what the goals are. They're basically told, have these students shadow you.

Impact similar to that of medical school partnerships

Dr. Mary Dougherty, director of nursing education in VA's Office of Academic Affiliations, says the positive effects on VA nurses who work with VANAP students is just one part of a much larger picture.

She says VANA and now VANAP have had an impact similar to that of VA's storied partnership with the nation's medical schools, which began after World War II as a way to help care for the waves of returning Veterans.

"There is empirical evidence," she says, "that these nursing partnerships produce significant value similar to the medical academic partnership."

Dougherty, a former Army reservist whose husband served in the Air Force for 40 years, is passionate about advancing Veterans' care. She lists a string of accomplishments, all in areas critical to VA health care, that she says can be traced to VA's special nursing education programs. "We were able to change the culture and produce concrete results, such as reducing psychiatric inpatient recidivism, reducing length of stay in ICUs, improving the therapy for diabetes."

Driving those results, she says, is the bond that programs like VANAP create between the academic side of nursing—what is taught in the classroom and practiced in labs—and real-world clinical practice.

This ideal is playing out in Birmingham, as at other VANAP sites.

Moore, a former Navy nurse who is now co-director of the VANAP undergraduate program at the Birmingham VA and the University of Alabama at Birmingham (UAB) School of Nursing, says he first goes over concepts in the classroom. Then, his students move to the lab, where they might practice on a mannequin or each other. Then, it's on to the clinic.

"I take my students into VA for their clinical rotations. If you think of a PhD doing bench research, and how they get that into practice—my degree as a doctor of nursing practice is to take research and apply that at the bedside. VANAP provides a good avenue to do that, to take the latest evidence-based practices and make sure they are disseminated at the hospital, both among the students and among the RNs at the bedside."

Chance Nicholson, a psychiatric nurse practitioner at UAB who teaches graduate students in VANAP, says: "It's a mutually beneficial relationship. The clinical aspect of VA gives us a place to disseminate the research and evidence-based practice that we do as part of our job. The folks at the VA are the ones who are putting it into practice and seeing it work. By our keeping the VA people abreast of the newest information, on top of what they're already doing, we learn from each other."

The academic spirit infuses VA nursing practice in a variety of ways, says researcher Wyte-Lake. For example, units participating in VANAP have started "journal clubs" where nurses get together to talk about recent studies and how they can apply the findings in their work.

Also, VA preceptors, who are not full-fledged faculty but do hands-on teaching on the VA hospital units, get exposure to the academic side of nursing. Nicholson says the preceptors are invited to share their knowledge in the formal classroom or lab setting.

"We give them an opportunity to teach over here at the school," he says. "They share some of their evidence-based practices with our students."

Some VA preceptors, inspired by their taste of higher-level nursing education and perhaps encouraged by personal contacts they make at the university, decide to pursue more advanced degrees, such as a doctor of nursing practice, or a doctor of nursing science.

That's been one of the findings from the research by Wyte-Lake and colleagues. In a 2014 study published in the Journal of Professional Nursing, in which they interviewed more than 200 nurses who took part in VANA at 15 sites, they found a strong link between VANA participation and enrollment in an advanced nursing degree program.

Having more young people graduate as RNs, and having more nurses go on for their master's or doctoral degrees, will help solve the nation's overall nursing crisis. VANA and VANAP have already made a dent in VA's shortage.

Dougherty says by the time VANAP students have completed their four-year degree—and their post-bachelor's residency in VA—they are well-attuned to the VA environment.

"They've been acculturated into VA. They understand the culture and respect the mission."

She presses the point that while VANAP students do get a strong nursing education, the raison d'etre of the program is to help VA meet its organizational goals. It is designed mainly to help VA meet the challenges of caring for the nation's Veterans.

"This is all done within a model that focuses on the major priorities within the organization," says Dougherty. "For us, that is Veterans. Everything is Veterans."

As for those graduates of the program who end up working outside VA, they will contribute to Veterans' care in other ways, leveraging what they learned in VANAP.

Moore: "We know there are some 24 million Veterans in the U.S., and only about 8 million receive some portion of their care inside VA. We want our graduates to be conscious of Veterans' health issues, wherever they encounter those Veterans."