ORD Home » Currents  » In pursuit of precision medicine for PTSD

In pursuit of precision medicine for PTSD 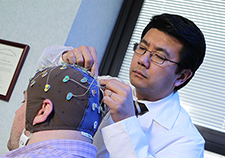 Dr. K. Luan Phan prepares a research participant for an EEG study. His lab is looking for brain patterns that predict how well a patient will respond to particular treatments for PTSD. (Photo by Jerry Daliege)

Dr. K. Luan Phan prepares a research participant for an EEG study. His lab is looking for brain patterns that predict how well a patient will respond to particular treatments for PTSD. (Photo by Jerry Daliege)

Brain scans of war Veterans with posttraumatic stress disorder have led researchers to an area of the prefrontal cortex that appears to be a good predictor of response to treatment with SSRIs—the first-line drug treatment for PTSD.

The findings, which came out online June 26, 2015, in the journal Neuropsychopharmacology, are hopeful news amid a new national push toward "precision medicine," in which doctors will tailor drug regimens and other treatments based on patients' individual gene profiles or other factors. President Obama announced the initiative earlier this year.

So far, though, little of this approach is in use in everyday psychiatry.

"This is the holy grail for brain imaging," says lead researcher Dr. K. Luan Phan, chief of neuropsychiatric research at the Jesse Brown VA Medical Center and professor of psychiatry at the University of Illinois at Chicago. "We hope in the future to be able to use scans to help distinguish PTSD from other illnesses, and then to predict how well someone will do with a certain medication, or with talk therapy. What we envision is being able to say to a patient, 'Given your scan value, you have an X percent chance of getting better on this treatment.'

The approach, says Phan, will benefit patients and providers alike: "We'll be saving a lot of resources on the clinical side, and more importantly, we'll also not be wasting patients' time sending them for a treatment that is not likely to help them."

His latest study included 34 Iraq and Afghanistan Veterans, half of them with PTSD. They all got functional MRI scans, which track blood flow in the brain to show which areas are using the most oxygen—a sign of increased activity.

The researchers saw that among the PTSD group, who were all taking the drug paroxetine (sold as Paxil), the patients who showed the most improvement from the SSRI were those who showed the least activation, prior to treatment, of a brain area called the right ventrolateral prefrontal cortex, also known as the inferior frontal gyrus. The region is known to help with emotional regulation. It serves as a rational counterbalance to parts of the brain that generate raw emotion. It helps with tasks like impulse control, cognitive flexibility, and executive function. "These are all ingredients of emotional regulation," says Phan.

One nuance in the findings was that the brain area that appeared to predict response to SSRIs—the right ventrolateral prefrontal cortex—was not the exact area that appeared to be affected by SSRI treatment. According to the fMRI scans, it was a related area—the left dorsolateral prefrontal cortex, which has similar functions—along with another region called the supplementary motor area, that showed more activation after treatment.

Phan explains: "It would be intuitive that something you're trying to correct would also be the very same thing that would predict how well you do. But data from our lab and others suggest this isn't always true. A mechanism of change could be different than a predictor of change. One area could change with treatment, but another area could predict your treatment response."

In any case, while the results need replication in larger trials, they point to a potential method to target drug therapy for PTSD patients.

"Patients with the least recruitment of prefrontal emotion regulatory brain regions may benefit most from treatment with SSRIs, which appear to augment activity in these regions," the researchers wrote. The first author was Annmarie MacNamara, a post-doctoral research fellow in Phan's lab.

Other SSRIs similar, but may have subtle differences

Paroxetine and sertraline (Zoloft) are both part of the SSRI class of antidepressants. They are currently the only drugs approved by the Food and Drug Administration to treat PTSD. Another SSRI, fluoxetine (Prozac), also has evidence of effectiveness for PTSD, but it's not yet approved for that purpose.

Phan says the study was limited to patients using paroxetine, because while all SSRIs work similarly, there may be subtle differences among them, and the researchers wanted to control for this. He noted that some patients may respond well to one SSRI but not another.

His lab is also involved in other efforts to tailor PTSD therapy based on brain patterns. In one VA-funded study, he is using a type of electroencephalography (EEG)—in which Veterans wear an electrode-studded cap on their head—to trace brain patterns that may eventually serve as biomarkers. The research method is much less expensive and more portable than brain imaging—and it carries an added advantage for combat Veterans, notes Phan.

"Functional MRIs typically cost around $500, and they are often not tolerated well by our Veterans," he says. "It can be a very claustrophobic experience. You can feel trapped in the tube, in this dark, tight space. And there are loud random noises that many Veterans have told me remind them of artillery fire."

Besides being distressing for the Veterans, says Phan, this can all detract from the research: "It's problematic on two fronts. It makes them move during the scan, which is not great for our science. Also, it may evoke different kinds of emotions that we're not explicitly looking to test in the scanner. It induces a different emotional state that is hard to control for."

Phan is also collaborating on a multisite randomized, controlled clinical trial that is comparing different PTSD treatments. The team is looking at how each affects the brain and whether brain markers can predict response to a particular treatment.

The trial began in 2011 with VA and Army funding and is still ongoing at three VA sites and at Massachusetts General Hospital. It has involved more than 400 Iraq and Afghanistan Veterans with PTSD. Some are being treated with sertraline, and others with a type of psychotherapy called prolonged exposure therapy, which is one of the two main talk therapies used in VA for PTSD. Others in the study are receiving a combination of the two.

Lead investigator Dr. Sheila Rauch, with the Atlanta VA Medical Center and Emory University, says it's too early in the study to compare how each of the therapies affects the brain—that is, which precise regions get activated or calmed—but some clues may come from past work on depression.

"Based on previous research on depression, we see some changes that are similar between treatments, but we also see distinct patterns," says Rauch.

She, like Phan, believes the scanning approach may eventually yield reliable biomarkers to guide PTSD treatment, but she says it will likely take several more years.

"Within PTSD, this research is in the early stages," she says. "We need larger studies that will allow replication and application to a treatment population," and those generally take at least five years to implement and yield results, she says. "This is a marathon and not a sprint. Expecting an overhaul in the next couple of years is unrealistic, but I do think 10 years from now, PTSD care will be even more advanced and effective than it is today. We are moving in the right direction, but we are not there yet."