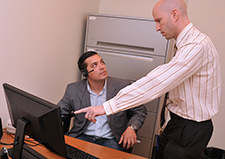 Adam Navarro-Lowery comes across as self-assured and confident, but there was a time—not long ago—when job interviews were a formidable threat for him.

A former military policeman with the 101st Airborne who saw action in Kosovo, the 36-year-old has struggled with posttraumatic stress disorder and many of its related issues.

"Insomnia, anxiety, depression—I had it all," admits Navarro-Lowery, who still attends treatment at the Jesse Brown VA Medical Center in Chicago.

But today, as a licensed leasing agent in the state of Illinois and an aspiring software marketer, he self-identifies as a "born salesman" and says he's found his calling. Job interviews, he says, are not nearly as stressful as they once were.

He attributes much of his success to a study he took part in at Northwestern University, involving university and VA researchers.

The study, which appeared recently in the Journal of Vocational Rehabilitation, showed promising results for a virtual-reality computer program that helps those with PTSD or other special challenges master their job-interview skills.

The software relies on video clips of a live actress—named "Molly Porter"—who plays a human resources representative for a retail outlet, and interacts with users based on how they answer her questions.

The researchers have reported similar results from the training for people with severe mental illness or higher-functioning autism.

"Job interviews are a great stressor," says Dr. Morris Bell, "and this helps people gain mastery over that stress." He spoke about the work at a neuroscience

Bell is a clinical psychologist and researcher at Yale University and the VA Connecticut Healthcare System. He consulted with a company called SIMmersion to develop the software, with Small Business Innovation Research funding from the National Institutes of Health. Today he has no financial stake in the company, although two of his coauthors do work there.

Dr. Matthew J. Smith, a collaborator of Bell's and lead author on the group's studies of the virtual-reality training, says it helps instill much-needed confidence.

"Veterans with PTSD and people with mental illness such as bipolar disorder, major depression and schizophrenia are prone to anxiety, which can escalate during stressful social encounters such as the job interview. The training was a big confidence builder for them," says Smith, an assistant professor of psychiatry and behavioral sciences at Northwestern University Feinberg School of Medicine.

Adds Bell: "Self-confidence is huge. What this is really a treatment for, apart from the skills training, is the anxiety of going on a job interview."

In the PTSD study, Navarro-Lowery and 22 other Veterans used SIMmersion's virtual-reality job-interview training for up to 10 hours over two weeks. Another 10 Veterans were "wait-listed" as a control group.

The study found good adherence to the program, and high satisfaction with it. More important, those who used the program significantly boosted their job-interview skills, compared with their baseline scores.

Across all the patient groups that have used the program, Bell says, the results were consistent, suggesting that "virtual reality training may benefit a wide range of disorders." More than 9 in 10 users said the training was helpful; more than 8 in 10 said it gave them confidence.

And perhaps most important, those who used the program were far more likely to land a job.

"When we looked at employment outcomes," says Bell, "it was pretty impressive. More than double the number of people got employed after getting the job-interview training."

Training customizable for PTSD, other conditions

The program is customizable for different groups, including Veterans with PTSD. Navarro-Lowery and his fellow Veterans could choose modules that would have Molly, the interviewer, ask specific questions about their military experience. For example, "What skills did your period in the armed forces give you?" For each question, users see a menu of possible responses, and they can respond either by clicking the one they want, or reading it aloud. The program has voice recognition.

An onboard "coach"—like Molly, a live actress who was filmed—uses hand gestures such as a thumbs-up or down to cue users on whether they have chosen an appropriate response. A poor answer, such as "This interview is taking longer than I expected," will trigger a cold and curt reply from Molly, such as "We're done."

Navarro-Lowery says he liked the repetitive drilling, and the ability to advance through three levels of difficulty, with Molly going from friendly, to business-like, to serious.

Besides the virtual reality interaction with Molly, the program includes other training components.

"It's a whole system of job preparation," says Bell. "There's psychoeducational information on how to prepare for a job, for example, and practice on how to fill out an online application."

As part of the study, after the Veterans had completed their virtual reality sessions, they role-played interviews with actual interviewers. The sessions were videotaped and scored by "blinded" human resources experts who didn't know which Veterans had received the virtual reality training.

"At the tail end of the study," recalls Navarro-Lowery, "we would do mock interviews with an actual person. At this point, you've been through all the simulated training, and you have all these appropriate responses readily available in your mind to fall back on."

Bell says: "The great thing about this is you do it over and over again. You do 10 plays of this and you'll have learned many of the right things to say."

He adds that importantly, the training seems to help people make progress in the face of long-standing deficits. Namely, it appears to lessen the effects of impaired brain function—such as that seen in schizophrenia and autism, and to a lesser extent in PTSD—on job-interview performance.

The training used in the studies is commercially available and can be accessed online at www.jobinterviewtraining.net.