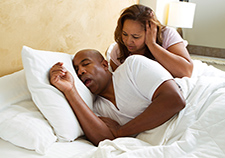 Snoring is one of the signs of sleep apnea, although not all people who snore have the condition. (Photo: ©iStock/digitalskillet)

Snoring is one of the signs of sleep apnea, although not all people who snore have the condition. (Photo: ©iStock/digitalskillet)

Obstructive sleep apnea—in which the airway becomes narrowed or blocked during sleep—was associated with a greater risk of kidney disease in a database study of more than 3 million VA patients.

The study is not the first to link the conditions, but it is by far the largest. The results appeared online June 2, 2015, in the journal Thorax.

"To our knowledge, this is the largest study to date to find substantial associations between a diagnosis of [obstructive sleep apnea] and kidney function decline," wrote the authors, led by a team at the Memphis VA Medical Center and the University of Tennessee Health Sciences Center (UTHSC).

The study also confirmed that Veterans with sleep apnea are at greater risk for other poor health outcomes: coronary heart disease, strokes, and death from any cause.

Several possible ways in which the conditions are linked

The team adjusted for a wide range of demographic and clinical variables to try and isolate apnea as a risk factor. Still, the study doesn't prove that sleep apnea causes kidney disease and the other outcomes—only that there's a strong relationship between them.

That said, the researchers believe there may be several ways in which sleep apnea can in fact damage and weaken the kidneys over time.

Lead author Dr. Miklos Z. Molnar, with UTHSC, says, for example, that the sleep disorder can affect the nerves that help control kidney function. It can also reduce the amount of oxygen reaching tissues in the kidneys, boost inflammation, bring on hypertension, and damage blood vessels, among other effects.

Molnar says further study may shed light on how exactly apnea affects the kidneys, but "today we know little about the actual mechanisms."

Those with sleep apnea often snore loudly. The snoring may stop occasionally, followed by choking or gasping for air. Throughout the night, as less oxygen reaches the body, the brain will detect when levels dip dangerously low, and the person will instinctively wake up. Such sleep disturbances usually result in daytime sleepiness.

Mild cases of sleep apnea can sometimes be treated effectively with lifestyle changes, such as improved sleep habits, weight loss, and smoking cessation. In other cases, a nighttime oral appliance that adjusts the position of the jaw and tongue can help. Another common treatment is the continuous positive airway pressure (CPAP) machine, which gently blows air into the throat. In more severe cases, surgery may be needed to widen the airway.

The new study's take-home message for doctors and other health care providers, says Molnar, is that obstructive sleep apnea is clearly one of the risk factors for chronic kidney disease, along with other well-known risk factors such as diabetes, high blood pressure, smoking, and obesity.

"Further clinical trials are needed to answer that question,"he says.

The study was funded mainly by VA and the National Institutes of Health and included authors from several universities in the U.S., Canada, Hungary, and Sweden. Representing VA were pulmonologist Dr. Amado X. Freire and kidney specialist Dr. Csaba P. Kovesdy, both with the Memphis VA.