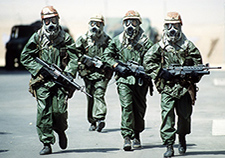 Troops from the 82nd Airborne Division wear protective gear as they try to acclimate to the heat of the Saudi summer during Operation Desert Shield. (Photo by Staff Sgt. F. Lee Corkran/USAF)

Troops from the 82nd Airborne Division wear protective gear as they try to acclimate to the heat of the Saudi summer during Operation Desert Shield. (Photo by Staff Sgt. F. Lee Corkran/USAF)

Based on a study of 85 Gulf War Veterans, VA researchers in Minneapolis have developed a tentative panel of blood markers they say can verify a diagnosis of Gulf War Illness with 90 percent accuracy.

The method now needs validation in larger groups of patients, say the researchers.

The findings appeared June 28, 2016, in the journal PLOS One. Lead author was Dr. Gerhard Johnson, with VA and the University of Minnesota.

As many as 300,000 Veterans—about 4 in 10 of those who deployed to the Persian Gulf during operations Desert Shield and Desert Storm in the early 1990s—are now estimated to have Gulf War Illness, more than 25 years later. That figure comes from a VA survey, based on Veterans' self-reported symptoms, published earlier this year. 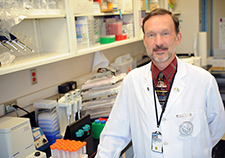 But the illness is still difficult to define and diagnose, and there is no broad agreement on the diagnostic criteria, let alone an exact cause. Commonly reported symptoms include pain, fatigue, mental fog, memory problems, headaches, insomnia, and gastrointestinal problems.

Chronic inflammation in the body may be the chief underlying culprit, or at least one of the key factors driving the illness, suggests the new study.

Biomarkers point to inflammation as culprit

The study found that several commonly used blood tests—all indicating inflammation—tended to yield different results between Veterans who reported symptoms consistent with Gulf War Illness, and those who did not.

"We are trying to translate the blood biomarker fingerprint into an effective evidence-based treatment for Gulf War Illness," said Bach.

The researchers suggest that a panel of such markers, once validated in further research, could serve as an objective biomarker for the condition. This could help clinicians diagnose the illness. It could aid further research as well. As of now, different research groups use different criteria for determining who has the condition, and that may hamper progress.

The study involved 57 Gulf War Veterans who met the current diagnostic criteria for the illness, and 28 who did not. They were mostly white, male, and middle-aged.

The researchers tested the volunteers' blood samples for red, white, and platelet counts, and for more than 60 different proteins. 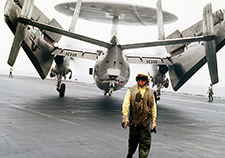 Along with these changes, six different proteins found in the blood showed significantly different values between the two groups. Levels of C-reactive protein, leptin, BDNF, and MMP-9 were higher in the Gulf War Illness group. Levels of two other proteins—MMP-2 and H-FABP—were lower.

Three of the markers used together—lymphocytes, monocytes, and C-reactive protein—yielded a predictive value of 90 percent for those Veterans whose probability of Gulf War Illness was 70 percent or more based on clinical interviews. In other words, the test indicated the presence of Gulf War Illness in 90 percent of those who appeared to have the condition based on conventional diagnostic criteria.

Taken together, write the researchers, the results "support the hypothesis that chronic inflammation is a component of the pathophysiology of [Gulf War Illness]."

Dr. Ronald Bach, the senior author on the study, said, "The fact that so many significant blood biomarker differences were detected in a relatively small study supports the conclusion that we are seeing a strong signal of a well-defined chronic inflammatory disease."

His group is already putting their theory about inflammation to the test. A clinical trial is now underway at the Minneapolis VA Healthcare System to test whether an anti-inflammatory drug—a new delayed-release form of the corticosteroid prednisone—improves health-related quality of life in Veterans with Gulf War Illness. The study, projected to be completed in 2020, will involve 100 Veterans in all.

"We are trying to translate the blood biomarker fingerprint into an effective evidence-based treatment for Gulf War Illness," said Bach.

Both the study of biomarkers and the clinical trial are supported by the Department of Defense Congressionally Directed Medical Research Program.