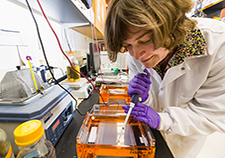 Researchers at the Yale School of Medicine and the VA Connecticut Healthcare System have successfully tailored a personalized treatment approach for chronic pain in a severe pain syndrome known as inherited erythromelalgia.

The findings appear in the June 2016 issue of JAMA Neurology.

Inherited erythromelalgia is also known as "Man on Fire" syndrome. It occurs when genetic mutations cause the body's pain-sensing system to go into high gear. This leads to flare-ups of pain and burning sensations in response to seemingly benign triggers, such as warm temperature and mild exercise.

The Yale-VA team used molecular modeling and other techniques to find the most effective drug treatment plan for two patients, both from the same family. The search was guided by the exact location of the mutation in each patient's genome.

"I am hopeful that...pain treatment will be transformed from trial-and-error to a precision medicine...approach guided by the DNA of each individual patient."

The researchers then conducted a double-blind, placebo-controlled study in which they assessed the effect of a placebo or the drug carbamazepine on the two patients' pain perception and brain activity. Compared with placebo, the drug led to significant improvements on several measures of pain.

Carbamazepine is a generic drug that has been around for decades. It is used mainly to treat neuropathic pain and epilepsy. It works on proteins called voltage-gated sodium channels.

In past studies on people with inherited erythromelalgia, the Yale-VA researchers had pinpointed the source of the problem as a mutation in a particular sodium channel, called Nav1.7. 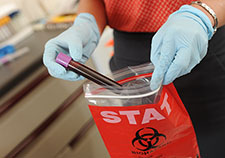 "While these results apply in the strictest sense only to the small number of patients carrying the S241T inherited erythromelalgia mutation, they demonstrate very clearly that it is possible to use genomics and molecular modeling to guide pain treatment," said Waxman.

Waxman is a professor at Yale and director of the Center for Neuroscience and Regeneration Research, located on the campus of the West Haven VA.

"It was fascinating to see that reduction in pain, following treatment with carbamazepine, was paralleled by a shift in brain activity from areas involved in emotional processing to areas encoding accurate sensation," said lead coauthor Dr. Paul Geha, an assistant professor of psychiatry at Yale.

Transforming pain treatment from trial and error to precision medicine

Chronic pain affects an estimated 100 million people in the U.S. Current treatments often involve a long and frustrating trial-and-error approach with drugs, including prescription opioids that carry the risk of abuse and addiction.

"I am hopeful that, some years from now, pain treatment will be transformed from trial-and-error to a precision medicine, first-time-around approach guided by the DNA of each individual patient," Waxman said.

In an accompanying editorial in JAMA Neurology, Dr. Juan Pascual of the University of Texas Southwestern Medical Center wrote that "the study provides an intelligent practical demonstration of the growing value of molecular neurological reasoning...There are relatively few examples in medicine where molecular reasoning is rewarded with a comparable degree of success."

The research was funded in part by VA, the Erythromelalgia Association, the Kenneth Rainin Foundation, and the National Institutes of Health.

The Center for Neuroscience and Regeneration Research focuses on molecular and cell-based discoveries aimed at restoring and preserving nervous system function. The center involves support from and collaborations among VA, Yale, the Paralyzed Veterans of America, and United Spinal Association.

Adapted from an article by Lakshmi Bangalore, Center for Neuroscience and Regeneration Research