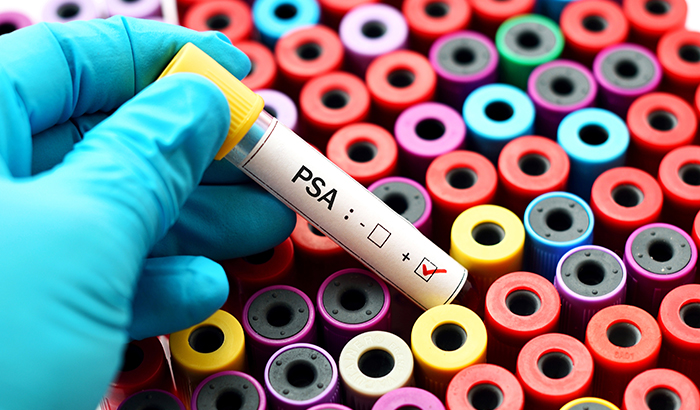 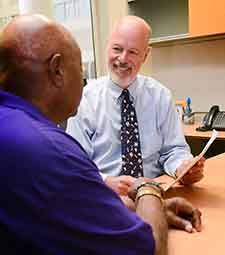 Dr. Timothy Wilt, a physician-researcher with the Center for Chronic Disease Outcomes Research at the Minneapolis VA Health Care System and a professor of medicine at the University of Minnesota, led the PIVOT study on prostate cancer treatment. (Photo by April Eilers)

Dr. Timothy Wilt, a physician-researcher with the Center for Chronic Disease Outcomes Research at the Minneapolis VA Health Care System and a professor of medicine at the University of Minnesota, led the PIVOT study on prostate cancer treatment. (Photo by April Eilers)

A VA-led clinical trial that spanned nearly 20 years finds that surgery does not significantly reduce all-cause or prostate cancer deaths for men who are diagnosed in the early stages of the disease.

The researchers conclude there was no "statistically significant difference" in deaths from any cause or specifically prostate cancer, when comparing early surgery and observation. The latter involves regular monitoring using the PSA (prostate specific antigen) blood test and delayed surgery to reduce symptoms if they develop.

In addition, they say, surgery to remove the prostate resulted in immediate and long-term harms that were common, bothersome, and sometimes serious. These included early surgical complications such as bleeding, blood clots, and infections; long-term urinary, erectile, and sexual dysfunction; and a negative impact on how well men performed their daily activities. Surgery did reduce disease progression and the need for subsequent procedures, although most treatment was for asymptomatic and PSA progression, for which benefits are not certain. In other words, it is unclear what men with no symptoms stand to gain from surgery, even if they've been diagnosed with prostate cancer and have experienced a sharp rise in PSA levels.

The landmark study, known as the Prostate Cancer Intervention Versus Observation Trial, or PIVOT, was published on July 13, 2017, in the New England Journal of Medicine. It was funded by the VA Cooperative Studies Program, which conducts large clinical and epidemiological studies. The National Cancer Institute and the Agency for Healthcare Research and Quality provided extra funding.

Fear of cancer leads many men to select surgery

Dr. Timothy Wilt, a physician-researcher with the Center for Chronic Disease Outcomes Research at the Minneapolis VA Health Care System and a professor of medicine at the University of Minnesota, led the trial.

"These results suggest that for most men, observation or PSA-based active monitoring can result in similar very long-term all-cause and prostate cancer-specific mortality, while avoiding harms of radical intervention," Wilt says. "Findings from PIVOT and similar studies will improve prostate cancer care, in part, by reducing over-diagnosis and overtreatment harms, as well as by stimulating new research to identify safe and effective therapies in men with higher-risk disease."

"Findings from PIVOT and similar studies will improve prostate cancer care, in part, by reducing over-diagnosis and overtreatment harms..."

At the same time, Wilt acknowledges that observation is rarely practiced in the United States, despite what he says is evidence that it is effective and reduces negative after-effects. "This is likely based on widespread beliefs and fears that a cancer diagnosis may elicit among men, their families, and physicians, rather than scientific evaluation of benefits, harms, and costs," he says. "That needs to improve. We hope the PIVOT study will help with that." 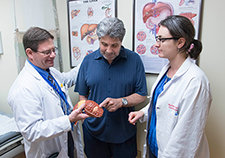 Prostate cancer, the second-leading cause of cancer deaths among men, is most common in men age 65 and older. The disease is usually found in its early stages, typically due to PSA screenings, and often grows slowly. It may take many years for a tumor to become large enough to be detectable and even longer to spread beyond the prostate. Most men live with the cancer for decades without symptoms and die of other causes even without early surgery.

The latest findings in the PIVOT trial were consistent with earlier results that had been published at the 12-year mark of the study. The trial involved 731 men with localized prostate cancer and took place at 44 VA sites and eight non-VA academic medical centers. The men were split about evenly into two groups and were randomly assigned to surgery, also known as radical prostatectomy, which is surgical removal of the walnut-sized prostate, or to the "observation" group that was monitored with PSA tests.

A few of the findings seem to suggest that some mortality results leaned more favorably toward surgery than observation. But Wilt cautions that those findings were small in absolute terms (6 percent or less) and not "statistically significant," according to the researchers' statistical methods. The findings should also be weighed against large increases in early, bothersome, long-lasting, and sometimes serious harms from surgery, he says.

Some of the findings are as follows:

Dr. H. Gilbert Welch, a professor of medicine and general internist at Dartmouth College in New Hampshire, praised Wilt and his colleagues for completing the PIVOT study. Welch has authored books that have focused largely on over-diagnosis in screening for prostate and other forms of cancer, saying many doctors test too often, treat too aggressively, and tell too many people they are sick.

"Too often, patients feel compelled to 'act fast' when faced with a cancer diagnosis," says Welch, who worked for more than two decades at the White River Junction VA Medical Center in Vermont. "PIVOT makes clear that observation followed by selective intervention is a reasonable choice."

It's "hard to imagine a study of this scale outside of VA," Welch adds. "Twenty years and more than 50 study sites...that's a heroic effort."

A 2012 editorial published along with the initial findings complimented the PIVOT team's "foresight" in designing and launching the trial in 1994. The author of the editorial, Canadian urologist Dr. Peter Black, said the trial should send a clear message to urologists and presumably radiation oncologists that specific steps are needed to diminish the overtreatment of patients with screening-detected prostate cancer. "More investigation is needed, however, to more accurately determine the boundaries between those who need treatment and those who do not," Black said.

But Wilt's views aren't shared by the entire urological community, with debate continuing about the relevance of PIVOT's findings to contemporary practice. Dr. Minhaj Siddiqui, chief of urology at the Baltimore VA Medical Center, says the field of urology has evolved since the PIVOT study began in 1994 to where observation, also known as watchful waiting, is only practiced in patients who are too sick or too old to undergo surgery or radiation. Instead, many patients with early-stage prostate cancer undergo active surveillance. That procedure calls for a combination of PSA tests and biopsies in which doctors examine prostate cells that may give signs of disease progression.

Siddiqui says active surveillance today is equivalent to what observation was when the PIVOT study was launched.

"The thinking I have on this is that if surgery does not outperform observation, it's unlikely that it's going to outperform active surveillance, either," Siddiqui says. "It shows that either way not immediately intervening on prostate cancer patients with low-risk disease is a safe option. It's a safe approach for managing patients when you look at it in terms of overall outcomes."

Wilt agrees that not immediately intervening is a safe option for many. He says the advantage of observation over active surveillance, especially for men with low-risk disease, is that it avoids potential prostate biopsy harms such as pain, bleeding, and infection, as well as the rare chance of hospitalization for a life-threatening blood stream infection.

Many Veterans have prostate cancer

Wilt says results from PIVOT and other recent randomized trials provide evidence that revisions in the guidelines are needed and would improve patient care quality.

The detection of prostate cancer is usually based on three factors: tumor histology, or a biopsy; tumor size; and a PSA test. A PSA under 10, a Gleason score (histology) of six or less, and a tumor that can't be felt in a rectal exam is an example of low-risk disease, Wilt says.

Wilt admits there are skeptics in the medical community who question PIVOT's conclusions, in part because the data seem to indicate a survival advantage for surgery. But he stresses that the difference between surgery and observation is small, requires many years to occur, is not statistically significant, and is not present in men with low-risk disease. If survival differences exist, they should be balanced against the negative long-term health consequences of surgery that occur early and often, he says. He notes that PIVOT provides important information that can guide clinicians, patients, and Veterans on what to do in cases of early-stage prostate cancer.

"Prostate cancer is particularly relevant to VA because our patients are primarily older men, in whom prostate cancer is common," he says. "Many of our Veterans have other health conditions that further make early intervention tradeoffs unfavorable. Sharing information from PIVOT and other studies with our patients will result in many concluding that observation is an excellent treatment choice. We should support those well-informed decisions."

Wilt adds: "The medical and lay community is recognizing the importance of observation for many men with PSA-detected early-stage prostate cancer in reducing treatment harms while preserving length of life and avoiding prostate cancer death. More needs to be done to increase observation and reduce overtreatment with surgery or radiation, especially in men with low PSA and low-risk disease, while also identifying safe and effective treatments for men with higher-risk disease."