ORD Home » Currents  » For Vets with PTSD, therapeutic group outings may pave the way back into co... 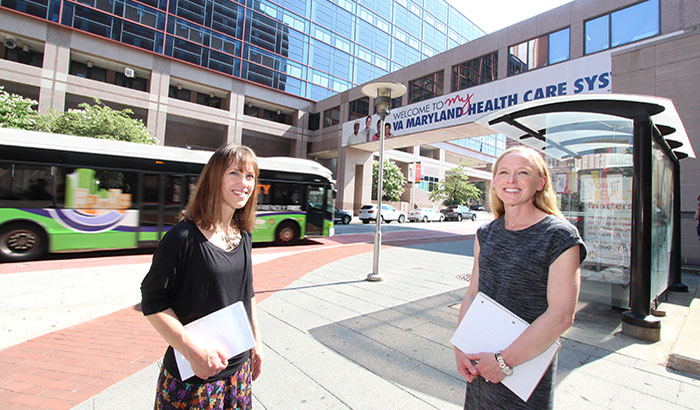 Drs. Erin Romero (left) and Melissa Barone are seen near a bus stop that was one of several starting points for Veterans going on group outings, with a therapist, as part of exposure therapy for PTSD. (Photo by Mitch Mirkin)

For Vets with PTSD, therapeutic group outings may pave the way back into communal life

For many people, even without a clinical disorder, these can be sweat-inducing, stomach-churning experiences. Throw PTSD into the mix and the anxiety can become overwhelming. Panic can ensue. The ordeal can be intimidating enough to keep some people at home.

Confronting such public situations—in a safe, gradual manner—is part of prolonged exposure therapy. It’s one of the gold-standard psychotherapies VA offers Veterans with PTSD, whether from combat, sexual assaults, or other traumas.

However, the therapy is usually individual. Having Veterans go on group outings with peers who are coping with similar fears is relatively untrodden terrain.

"They role model for other Veterans their own habituation and effective coping with trauma reminders and feared stimuli."

Clinician-researchers at the Baltimore VA Medical Center believe the group approach may pose unique advantages for some patients. The team just published an evaluation of the model.

Their report, in the Journal of Traumatic Stress, is based on results from 43 Veterans, mostly male and African American. It concludes that “in vivo exposure group therapy” shows promise for those resistant to more conventional forms of PTSD treatment.

The Baltimore VA psychologists who designed the program modeled it on traditional prolonged exposure therapy. They call it Get Back in Life (GBL).

Dr. Melissa Barone says a typical sentiment expressed by Veterans in GBL is: “I would never have done this on my own, but going with the group helped me to get over the hardest part.”

For some Veterans, the program involved getting on a bus, together with the other Veterans in the group and their therapist, on the bustling street outside the VA medical center in downtown Baltimore.

“In vivo” exposures—facing real-life situations—is just one part of GBL. The program involves groups of about 8 to 10 Veterans. They meet once a week for 12 weeks.

In the first few weeks, they receive “psychoeducation” about PTSD and the cognitive behavioral model of anxiety.

Next, they move on to identifying the specific situations that cause them anxiety, and prioritize which ones to tackle first. The idea is to start easier and gradually move onto more stressful settings. 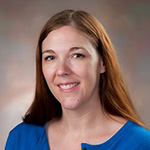 There’s individual homework for the participants, in which they systematically take on some of the exposures they fear, for about 45 minutes per day. They keep a record of how they are feeling, and then reflect on what they learned from the experience each time.

“GBL places a heavy focus on corrective learning and review of in vivo exposures,” says Dr. Erin Romero, who manages the Trauma Recovery Program at the Baltimore VA.

GBL differs from conventional prolonged exposure therapy is two ways: First, it includes the therapist-assisted group outings. Second, it does not include “imaginal exposure.” That’s where patients talk about their traumatic experience, and then make a recording that they review over and over, to eventually wear down the fear response.

At the heart of GBL is the group experience during the outings. The larger group of 8 or 10 might break up in a couple of smaller groups. Imagine three or four Veterans and a therapist boarding a bus, for example. Every five minutes, the therapist discreetly checks in with the Veterans about how distressed they are feeling. They express it in terms of their “subjective units of distress,” and the therapist jots down the numbers.

The theory is that over time—during the bus ride, cafeteria visit, or whatever the activity—the anxiety dissipates. The body’s nervous system adjusts to the stressor. The discomfort wanes. By the end of the 45-minute bus ride, the “subjective units of distress” rating might be half of what it was at the outset, or less. And ideally, the next time out, it will sink even lower.

After the outing, there’s some group discussion to process it all. Veterans analyze their challenges and progress. They come to understand—and to internalize—that it’s possible to once again take part in the activities they’ve been avoiding.

Barone cites several ways the Vets help each other during the process.

“Anecdotally, Veterans consistently report to group facilitators that they have benefited from directly observing other group members’ successes during in-session exposures. During therapist-assisted group exposures, they provide feedback to each other. They might say, for example, ‘I noticed how at ease you were on the bus.’”

The Veterans also give each other feedback during classroom sessions, says Barone. “Group members provide feedback on the implementation of exposure assignments, problem-solve barriers to success, and provide praise and positive reinforcement during review of homework each week. They role model for other Veterans their own habituation and effective coping with trauma reminders and feared stimuli.”

Barone adds that some Veterans in GBL have mustered the courage to tackle certain situations only because they were inspired by their peers: “Seeing and hearing how another Veteran reduced anxiety and achieved mastery over a particular situation has shown to be a powerful motivator in the GBL group.”

The therapists note that in their study, only about 1 in 5 Veterans (19 percent) who started GBL ended up attending only three or fewer sessions. That compares favorably with dropout rates from conventional exposure therapy. (For an extensive review of dropout rates in PTSD therapy, see this 2015 article by a VA Boston researcher.)

At the end of the day, no one therapy is right for every Veteran with PTSD. But Barone and Romero are eager to test their group model in a larger study. They are cautiously optimistic about its potential to help Vets “get back in life.”

You may have read about exposure therapy that uses virtual-reality technology to recreate the sights, sounds, sensations, and even smells that Veterans experienced in war. They wear 3D goggles and special earphones and immerse themselves in the world associated with their traumas.

So how does venturing into a busy supermarket or boarding a bus in downtown Baltimore recreate the trauma experienced, say, by a Vet who fought in the jungles of Vietnam or the mountains of Afghanistan?

Dr. Melissa Barone explains that “in vivo exposures focus on objectively safe situations that are avoided because they serve as reminders of a traumatic experience.”

She says three types of exposures are targeted in treatment. The first are the ones that relate most directly to the original trauma.

“The first category is trauma-related cues, or cues that were present at the time of the traumatic event. Heat, smells of incense, and sand are common examples for Iraq and Afghanistan Veterans.” For many, it might be fireworks at a July 4th event, or the sound of a helicopter overhead.

The second category is cues that are generalized, says Barone. “These cues were not present at the time of the experience but now are perceived to be dangerous. Crowded events, elevators, and public transit are common examples.”

In the fear-conditioning theories that underpin exposure therapy, these generalized cues are called “excessive response elements.” Barone explains “they reflect a pathological connection between a stimulus [for example, crowds], one’s response [typically anxiety], and a belief that does not reflect reality [such as ‘something dangerous will happen in the crowd’].”

When someone with PTSD gets in the habit of avoiding a certain situation—say, going out to a restaurant with family—rather than facing it and learning to endure the discomfort, which will eventually lessen, that erroneous and harmful belief will persist. It may even grow stronger over time and lead to further avoidance.

The third category relates to what psychologists call “anhedonia”—the inability to feel pleasure. These might be hobbies or self-care activities that PTSD patients avoid not because they perceive danger, but because they simply no longer feel any enjoyment from them.

In these cases, for a Veteran struggling with PTSD, getting back on a bicycle or going fishing could be just what the doctor ordered.