Dr. Ken Kunisaki is a pulmonologist and researcher at the Minneapolis VA Health Care System. (Photo by April Eilers)

"Our large study helped us confirm that this is something we need to pursue further."

A new study finds a greater risk for impaired lung function among men with HIV, compared with men without HIV.

The findings appeared in the journal AIDS in July 2020. 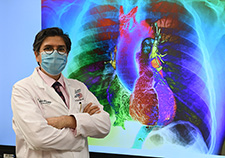 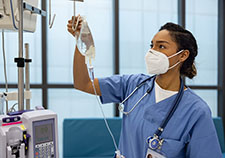 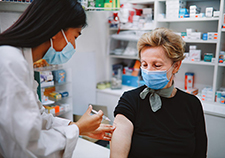 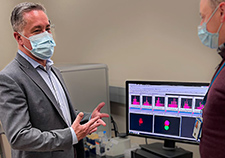 The reasons for the difference in diffusing capacity are unclear, the researchers note. “But our analyses suggest a complex relationship between lung function abnormalities, HIV infection, HIV treatment, cigarette smoking, and immune function,” they write.

Dr. Ken Kunisaki, a pulmonologist at the Minneapolis VA Health Care System, led the study. He was not surprised by the conclusion, given that smaller studies have suggested the same problem. However, “Our large study helped us confirm that this is something we need to pursue further,” he notes.

The researchers carried out the study between April 1, 2017, and March 31, 2018. Nearly 1,100 men enrolled in the Multicenter AIDS Cohort Study (MACS), an ongoing study of HIV infection in gay and bisexual men in four U.S. cities—Baltimore, Chicago, Los Angeles, and Pittsburgh—took part. Kunisaki and his team tested 591 HIV-positive and 476 HIV-negative men for lung function.

HIV (human immunodeficiency virus), the virus that causes AIDS, attacks cells that help the body fight infection, making a person more vulnerable to other infections and diseases. It is spread by contact with certain bodily fluids of a person with HIV, most commonly during unprotected sex or through the sharing of intravenous needles.

Today, medications allow people with HIV to live long lives, and those on effective HIV treatment don’t transmit the virus to others. That is why getting tested and treated for HIV early is very important. But there’s no way to permanently eliminate the virus once a person gets it. Studies have shown the virus can lead to health problems like heart disease, brain dysfunction, erratic sleep patterns, and lung disease.

“It stays in certain cells in the body,” says Kunisaki, who is also an associate professor at the University of Minnesota. “This low-level virus could lead to inflammation of tissue and blood vessels directly in the lungs. The virus might also change how the body responds to other routine infections like bacterial pneumonia. We are learning more all the time, but we still have a lot more research to do before we understand this better.”

Studies have suggested that HIV-positive men may be at higher risk for lung diseases, such as COPD (chronic obstructive pulmonary disease), which blocks airflow from the lungs. Its symptoms include breathing difficulty, coughing, mucus production, and wheezing. But those studies were often done at one clinic or hospital, they lacked HIV-negative controls, or they assessed lung function only with spirometry. The latter is an instrument for measuring the volume of air the lungs can hold and how quickly the lungs empty the air.

In comparison, Kunisaki and his team tested differences in spirometry and single-breath diffusing capacity in men with and without HIV. Other notable strengths in his study included its multicenter design and relatively large sample size.

The average age among the HIV-positive participants was 57. Their prevalence of current marijuana and cigarette use was high, and nearly half were former cigarette smokers. The HIV-positive men were also younger, more commonly of African ancestry, and more often coinfected with hepatitis B or C, two of the three most common types of viral hepatitis. Both can cause damage to the liver.

The researchers saw evidence of a possible link between lower diffusing capacity and the length of time one is on HIV medication. But that was a “very borderline result and difficult to interpret because these men were on so many different HIV drugs in the past,” Kunisaki says. “In the future, we’ll be looking at whether certain HIV drugs are better or worse for the lung.”

The study’s limitations included a lack of functional outcomes, such as a six-minute walking test. “Lung function tests, like many things we measure in patients, give us valuable information, but they are only numbers,” Kunisaki says. “I think the most important thing for patients is how they actually function in day-to-day life. Studies suggest that having low diffusing capacity is also associated with worse exercise capacity. But we weren’t able to measure exercise capacity in our study.”

For HIV-positive men to avoid this type of lung impairment, Kunisaki suggests its most important to eliminate exposure to cigarette smoke. Smoking is clearly the biggest driver of abnormal lung function tests, he says, noting that staying clear of second-hand smoke is important, too.

“I would also recommend doing one’s best to avoid other irritants to the lungs, such as indoor fireplaces, outdoor air pollution, and smoking non-cigarette products,” he says. “And if you have symptoms like a daily cough or frequent mucus, or difficulty keeping up with peers when walking, talk to your health care provider about these symptoms and decide if you may need lung function tests. If you have lung problems like asthma or COPD, there are many inhalers that can help you.”

The study adjusted for smoking, meaning the researchers found HIV was linked to abnormal gas exchange beyond what is expected from just cigarette smoking alone.

Kunisaki’s study, he notes, is one of the “foundation blocks” for what he and his team envision will turn into many other studies to better understand lung health in people with HIV. He’s in the process of analyzing lung function data from a study on women with and without HIV. Women can contract HIV heterosexually with an HIV-positive man or through intravenous drug use.