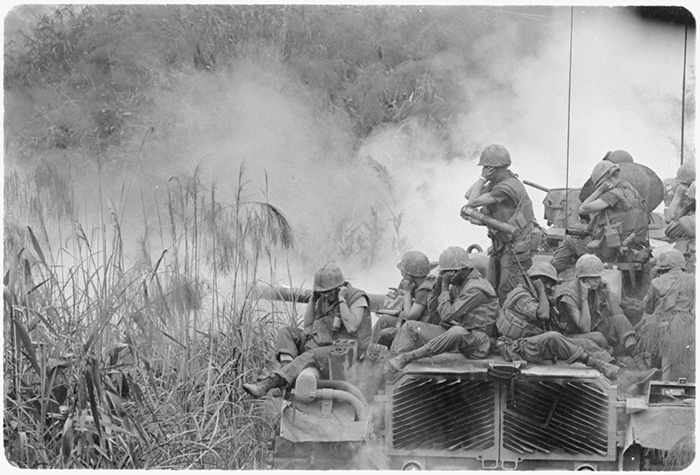 A new analysis of data from the Vietnam era found that lesbian, gay, and bisexual Veterans who served at the time are reporting PTSD and poorer mental health more often than their heterosexual counterparts. Here, Marines ride atop a tank during a road sweep near Phu Bai in central Vietnam. (Photo: National Archives)

"Imagine you're an LGB Vietnam-era Veteran. You grew up in a toxic time for LGB people, then served in the military, where your sexuality could end your career."

Lesbian, gay, and bisexual Veterans from the Vietnam era report PTSD and poorer mental health more often than their heterosexual counterparts, according to an analysis of data from the Vietnam Era Health Retrospective Observational Study (VE-HEROeS).

A greater burden of potentially traumatic events among LGB Veterans, such as childhood physical abuse, adult physical assault, and sexual assault, was associated with the differences.

"This study is the first to document sexual orientation differences in trauma experiences, probable PTSD, and health-related quality of life in LGB Veterans using a nationally representative sample," said Dr. John Blosnich, senior author of the study, published in July 2021 in Psychological Trauma: Theory, Research, Practice, and Policy. Blosnich is a research health scientist with VA’s Center for Health Equity Research and Promotion in Pittsburgh, and an assistant professor in the Suzanne Dworak-Peck School of Social Work, University of Southern California.

Findings based on responses from nearly 19,000 Veterans

Veterans are at high risk for experiencing potentially traumatic events during military service. Evidence also suggests that sexual minorities are at greater risk of PTEs, compared with heterosexual peers. However, few studies have documented how traumatic experiences may differ by sexual orientation among Veterans.

VE-HEROeS sought survey data from more than 45,000 Vietnam-era Veterans, as well as 11,000 matched controls. Data collection was completed in 2018; nearly 19,000 Veterans responded. Multiple studies are underway based on the data collected.

"When initiating VE-HEROes we sought input from the Vietnam-era Veteran community," said Dr. Victoria Davey, the study’s senior author. Davey is the principal investigator of VE-HEROeS and an associate chief research and development officer for VA. “That is being done more often in research but hasn't been done with Veteran research as much as it should be, at least in my opinion. It's important to bring the community into the research fold, so you hear from them what should be studied and what the approach should be. I think that by doing so, we created a better study."

About 1.5% of respondents identified as LGB

"We used the BTQ because it is well-validated in many populations, including military populations, and because we wanted this study to be comparable with other large studies,” said Davey.  After consulting with advisors from the Vietnam-era Veteran community, researchers added an eleventh question about witnessing sexual assault during military service. Nearly one-third of heterosexual Veterans and about one-fourth of LGB Veterans reported this type of PTE.

“The Veterans advising us said that one of the most traumatic things they experienced was actually having to watch sexual assaults, either on civilians or on other members of the military,” said Davey.

Differences between groups in traumatic exposures

The study found that 20.1% of LGB Veterans in the study had probable PTSD, compared with 14.7% of heterosexual Veterans— a significant difference. According to the National Institutes of Mental Health, approximately 3.6% of all Americans have PTSD, with prevalence more common in females (5.2%) than males (1.8%).

This is a key finding, he noted, because until the early 1970s, being lesbian, gay or bisexual was considered a mental illness. "And there are still people and institutions that believe there is something inherently damaging about being LGB,” said Blosnich. "The study analyses indicate that your sexuality is not the driver; if you are subjected to certain experiences, those experiences are the driver. It's how you are treated, not who you are."

Both Davey and Blosnich believe the study can help to inform PTSD treatment of Vietnam-era Veterans, as it indicates that traumas across the lifespan can contribute to PTSD, particularly for LGB Veterans—although how early-life traumas interact with military service experiences isn’t fully understood.

"Early life adversity and trauma experienced during the military may combine in complicated ways; we don’t know,” Blosnich said. “Military trauma is the reason we have a PTSD diagnosis. But it doesn’t happen in a vacuum.”

Providers should try to create a therapeutic safe space for Vietnam-era Veterans to talk about childhood trauma, he said, but that could be difficult if those earlier experiences are tied to LGB sexual identity.

"Imagine you're an LGB Vietnam-era Veteran. You grew up in a toxic time for LGB people, then served in the military, where your sexuality could end your career,” Blosnich said. “Feeling like it's okay to talk about your sexual orientation with a health care provider—that has to be really difficult.”

The 2016-2017 Vietnam Era Health Retrospective Observational Study (VE-HEROeS) study is a VA-funded nationwide study designed to assess the current health and well-being of Vietnam Veterans, Blue Water Navy Veterans, and Veterans who served elsewhere during the Vietnam Era (1961–1975). This study is comparing the health of these Veterans to similarly aged U.S. residents who never served in the military. Participants completed a survey of questions about military service, general health, lifestyle, and aging. Data collection was completed in 2018.

Statistics from the study