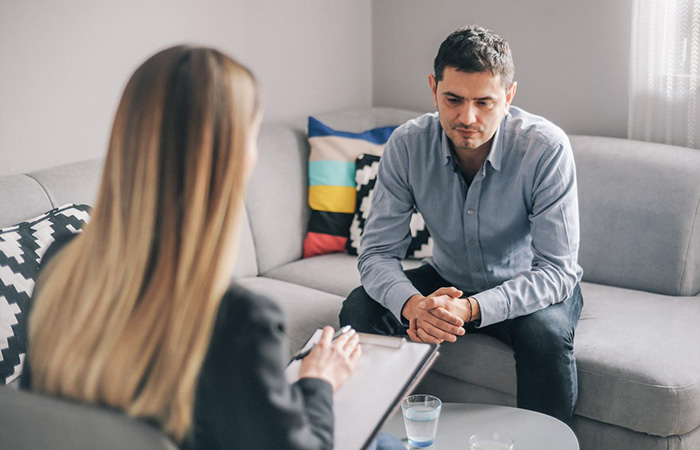 Despite the study’s key finding, Veterans with PTSD should not delay treatment thinking their symptoms will improve over time, says the principal investigator, Dr. Sheila Rauch of the Atlanta VA. (Photo for illustrative purposes only. Credit: NoSystem images)

"My collaborators and I want to get what works out to people who are suffering from PTSD and other issues after trauma and need help."

In a new study, researchers comparing three treatments for Veterans with PTSD found that the longer the time period between trauma and treatment, the greater the decline in symptoms.

The results appeared in the Journal of Clinical Psychiatry in June 2021.

Dr. Sheila Rauch, director of mental health research and program evaluation at the Atlanta VA Health Care System, led the study. Despite the surprising finding, she says Veterans with PTSD should not delay treatment thinking that their symptoms will improve over time.

“Their symptoms are unlikely to subside without treatment,” she says. “All of the Veterans in the study showed reductions and benefit. It means that they do not have to worry if they have been suffering a long time with PTSD because treatments do work regardless of how long it has been.”

The three treatments in the study are as follows:

Among the nearly 200 patients in the study, time since trauma (TST) ranged from half a year to 15 years. “The finding that longer TST shows larger symptom reductions is promising for PTSD patients who might not seek help for years following trauma,” the researchers write.

Rauch and her colleagues concluded through interviews and Veteran self-reporting that a longer time period between trauma and treatment predicted greater PTSD symptom reduction after six months of treatment. Notably, all three treatments produced large declines in PTSD symptoms, with no major differences in reduced symptoms. But Rauch stresses that these are aggregate findings, and that individual patients may do better with certain treatments.

The researchers also found that higher baseline physical pain severity strongly predicted a lesser and slower response to all three treatments, suggesting a common pattern in the nervous system among those patients. Plus, alcohol use did not impede the effectiveness of medication for PTSD, although many clinicians worry about how alcohol interacts with drugs intended to treat PTSD, Rauch says.

“Despite overall equivalence in outcomes, variability in response is apparent and examination of whether certain baseline variables may predict greater response overall or greater response within a treatment condition is still warranted,” the researchers write.

Rauch led a 2018 study that examined the same three treatments. That study also showed no group level difference in PTSD symptoms or symptom severity at 24 weeks. However, there was individual variability in how much PTSD symptoms changed. “That is the rationale for why we did the [2021] study,” Rauch says. “We wanted to see if there were baseline factors that predicted who may do better in what treatment. If there are, then we can use that information to start people in the treatment that is most likely to be effective.”

Rauch is a VA leader in PTSD treatment. She and other VA researchers are working to better understand the underlying biology of PTSD, advance new treatments, and refine diagnostic approaches. Anger, guilt, sleep problems, and re-experiencing trauma through flashbacks and nightmares are common symptoms for Veterans with PTSD.

Rauch and her team embarked on their latest study to look at predictors of response to PTSD treatment. Preliminary analyses from her research group and others had suggested that time since trauma could influence the likelihood of recovery or treatment response in patients with PTSD. The researchers thus opted to include time since trauma, along with other common factors theorized to impact treatment response, such as gender and trauma type.

Sertraline and the other FDA-approved medication for treating PTSD, paroxetine (trade name Paxil), are among the drugs recommended in the VA/DOD clinical practice guidelines for managing PTSD. The researchers chose to examine sertraline because it is believed to have fewer side effects, Rauch says.

The psychotherapy known as “prolonged exposure” is based on having patients revisit their traumatic events with a therapist to help them learn that those memories are not harmful, and that people can do things they want to do with less fear. Case in point: Being in a crowded area where you can’t see people behind you may trigger anxious feelings, but it doesn’t mean something bad will happen.

Study’s main outcome based on patient interview at six months

Rauch and her colleagues based their primary outcome on an interview at week 24 using the Clinician-Administered PTSD Scale for DSM-5 (CAPS-5), the gold standard for assessing PTSD symptom frequency and severity. They also gathered data via the PTSD Checklist for DSM-5, a Veteran self-report measure that assesses 20 PTSD symptoms.

Currently, Rauch is leading several PTSD studies and collaborating with researchers on other papers related to that mental health condition. One study she’s leading is focusing on prolonged exposure for primary care (PE-PC), a briefer version of the more traditional form of prolonged exposure. In PE-PC, all of the treatment is done in a primary care setting instead of a mental health clinic. She’s also working on a mobile phone app to support positive coping in health care workers and others impacted by the COVID-19 pandemic.

In general, Rauch’s research aims to expand access to effective PTSD treatments and to figure out how to make those treatments work faster and more efficiently for people.

“My collaborators and I want to get what works out to people who are suffering from PTSD and other issues after trauma and need help,” she says.