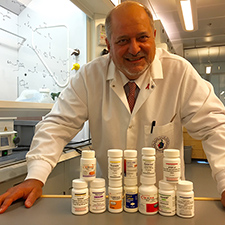 Dr. Raymond Schinazi, a researcher with the Atlanta VA and Emory University, received VA's 2015 Middleton Award for his development of drugs to treat HIV, hepatitis B, and hepatitis C infections. (Photo by Jaime Robards/Emory University)

Dr. Raymond Schinazi, a researcher with the Atlanta VA and Emory University, received VA's 2015 Middleton Award for his development of drugs to treat HIV, hepatitis B, and hepatitis C infections. (Photo by Jaime Robards/Emory University)