ORD Home » Currents  » Mood disorders after deployment: Could a parasite be partly to blame?

Mood disorders after deployment: Could a parasite be partly to blame? 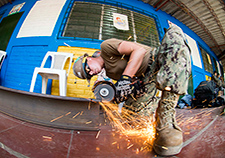 A U.S. Navy seaman cuts a metal beam at an engineering site in El Salvador. The country is among those with a relatively high prevalence of T. gondii infection. (U.S. Navy photo by Mass Communication Specialist 3rd Class Kameren Guy Hodnett/Released)

A U.S. Navy seaman cuts a metal beam at an engineering site in El Salvador. The country is among those with a relatively high prevalence of T. gondii infection. (U.S. Navy photo by Mass Communication Specialist 3rd Class Kameren Guy Hodnett/Released)

In a study a few years ago, rats infected with a certain parasite not only overcame their aversion to cat urine, but became attracted to it. In other words, they lost their natural fear of cats.

The parasite is Toxoplasma gondii. About a third of the people on earth are thought to be chronically infected with it, usually without symptoms. But in the past decade or so, scientists have begun to realize that some people—like rats—can develop serious behavioral problems when the parasite infects their brain. Schizophrenia, depression, suicidality, bipolar disorder, obsessive-compulsive disorder, neuroticism, hyperactivity—all have been linked to the bug in studies around the world.

Now, a team of VA and university researchers has raised the question of whether T. gondii might be partly to blame for the mood disorders that some troops experience after deployment. The concern arises because T. gondii infection is especially common in some areas of the world where U.S. troops have deployed or trained in recent decades, including parts of Europe, Africa, Latin America, Asia, and the Middle East.

In the June 2015 issue of Military Medicine, the researchers reported the results of a small pilot study involving 70 women Veterans of various ages. Eight of the women tested positive for T. gondii, which can be detected in the blood. Six of these eight had been deployed abroad during their military career.

All the women completed questionnaires measuring PTSD and mood symptoms.

The results are very preliminary and need replication with a larger sample of Veterans. Also, future studies would need to control for a wide range of health, demographic, and exposure factors.

One underlying question is whether T. gondii infection is a cause of mental illness—or perhaps a result. Some researchers have questioned whether people with pre-existing mental problems might be predisposed to poorer hygiene, especially around food, thus increasing the risk of T. gondii transmission and infection.

Studies would also need to learn more about how and when people get infected. Research on military populations, for example, might look at contact with feral cats during deployment, as the parasite is often transferred through cat feces.

For now, the new findings offer an initial glimpse at whether there may indeed be a relationship between T. gondii and Veterans' post-deployment mental health.

Almost no existing literature on topic

"Virtually nothing is known" about the topic to date, say the authors, led by Dr. Allyson Duffy, with VA and the University of South Florida. "There is almost no literature about incidence, risk factors, and effects of T. gondii infection in military populations, especially in women Veterans."

The researchers included only women Veterans in the pilot because they generally study that population. But they say the questions about T. gondii and its mental effects would apply to male Veterans as well. They urge further study of the topic across both groups.

"It's important for health care providers to be aware of all possible reasons why Veterans may experience mental health distress," says Duffy.

To learn more about T. gondii infection—including risk factors, prevention, and diagnostic and treatment strategies—visit the Centers for Disease Control and Prevention page on Toxoplasmosis. The infection is generally of most concern to women who are pregnant or planning to become pregnant, and to those who have a weakened immune system.

The study included authors from the Center of Innovation on Disability and Rehabilitation Research at the James A. Haley Veterans Hospital in Tampa; University of South Florida; University of Colorado; University of Maryland; and VA Mental Illness Research, Education and Clinical Centers in Denver and Baltimore.