Does the term 'hypertension' lead some patients astray? 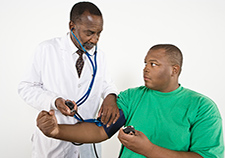 The term "hypertension" may give some patients a mistaken notion of what their condition involves, maintain VA researchers Drs. Barbara Bokhour and Nancy Kressin. (Photo: ©iStock/IPGGutenbergUKLtd)

The term "hypertension" may give some patients a mistaken notion of what their condition involves, maintain VA researchers Drs. Barbara Bokhour and Nancy Kressin. (Photo: ©iStock/IPGGutenbergUKLtd)

"Hypertension" and "high blood pressure" mean exactly the same thing. But a VA research team in Boston believes the first term may give some patients a distorted idea of the condition—and undermine efforts to treat it.

Drs. Barbara Bokhour and Nancy Kressin, both with Boston University and VA's Center for Healthcare Organization and Implementation Research, write that "the word 'hypertension' may derail patients' understanding of the condition, and impede clinicians' ability to keep them on the 'right track' of hypertension management."

Bokhour and Kressin's paper appears in the July 2015 issue of Circulation: Cardiovascular Quality and Outcomes, published by the American Heart Association.

"Hypertension," literally translated, means too much tension. And this is where the understanding of the disease begins and ends for some people, say the researchers. These patients may mistakenly believe all they need to focus on is reducing their stress. That's important, but it's only part of the picture when it comes to managing the condition. Exercise, diet, medication—all play a major role. And in some cases, the condition may stem from underlying medical problems—such as kidney disease—and have little to do with stress.

In fact, a 2013 review by the American Heart Association even pointed out that there is little evidence that various relaxation therapies—including yoga and meditation—are effective in lowering blood pressure. The upshot, according to Bokhour and Kressin, was that "stress reduction is not an effective primary treatment for the condition."

It's true that stress and anxiety do raise blood pressure temporarily, but the link to chronic high blood pressure is much less clear—and somewhat controversial. Bokhour and Kressin point out that while earlier reports from the Joint National Committee on Prevention, Detection, Evaluation and Treatment of High Blood Pressure at least mentioned stress reduction as a tool, the latest report, issued in 2014, backs away from any mention of stress.

Bokhour and Kressin admit it would be unrealistic—and perhaps unwise—to try and completely banish the term "hypertension" in favor of "high blood pressure." But they do recommend that doctors and other providers discuss with their patients what the condition actually involves—namely, blood flowing through the arteries at too high a pressure. And, say the researchers, they should talk with patients about "how elevated blood pressure is and is not related to stress."

In a larger sense, says the VA team, health professionals need to be acutely aware of their use of medical jargon—even seemingly well-known terms such as "hypertension."

"As we move towards a more patient-centered medical care system," write Bokhour and Kressin, "paying attention to patients' understandings of biomedical language is critical to insuring that providers have the greatest possible impact on the health of their patients."