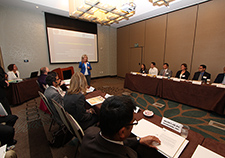 "In research, you need blocks of time," says Dr. Walter Lee. "You can't do a little here, a little there."

About 20 awardees in the biomedical and clinical fields, all nearing the end of their three- to five-year CD support, met in Washington, DC, in late July. The goal was to share their accomplishments, network, learn about each other's work, and receive coaching from VA Office of Research and Development (ORD) staff on how to navigate the next phase of their research career.

"These folks are rising stars in the research world," says VA's Dr. Ronald Przygodzki. "A good number of them will likely land leadership positions in and outside the VA system. They are people who are going to be changing how VA research and health care perform." 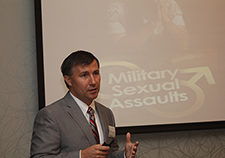 Dr. Nathan Kimbrel of the Durham (N.C.) VA Medical Center talks about his research on PTSD during a July 2015 meeting of VA Career Development awardees. (Photo by Mitch Mirkin)

Dr. Nathan Kimbrel of the Durham (N.C.) VA Medical Center talks about his research on PTSD during a July 2015 meeting of VA Career Development awardees. (Photo by Mitch Mirkin)

"You move science forward," Przygodzki told the awardees. "You move medicine. You change the way health care is done."

Fostering a sense of community 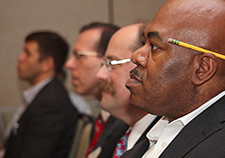 Dr. Ken Myrie (foreground) of VA's Office of Research and Development listens to a presentation during a July 2015 meeting of Career Development awardees. (Photo by Mitch Mirkin)

Dr. Ken Myrie (foreground) of VA's Office of Research and Development listens to a presentation during a July 2015 meeting of Career Development awardees. (Photo by Mitch Mirkin)

Myrie, who has a PhD in human genetics, says one aim of the in-person meeting was to "foster a sense of community. We wanted to give them an opportunity to interact with each other in a pretty intensive way, and to hopefully form collaborations across the research spectrum."

Myrie says the CD program is "extremely competitive," and that it's one of VA's best tools for recruiting, training, and retaining high-quality researchers. He notes that among past biomedical and clinical CD awardees, 7 in 10 have gone on to establish independent VA research careers and successfully compete for Merit Review funding. In VA's Merit Review process, panels of experts scrutinize research proposals for scientific merit and make recommendations on which ones should be funded.

Currently, there are 124 Career Development awardees receiving funding through VA's Biomedical Laboratory R&D and Clinical Sciences R&D services. Another 156 CD awardees are supported by the Health Services and Rehabilitation R&D services. All told, VA has more than 3,000 active investigators nationwide.

At the meeting, the awardees all gave brief presentations on their work, and heard from ORD experts about issues they will need to consider as they set out to independently obtain research funding: how to put together a successful proposal, for example, or the fine points of human and animal research subject protection. 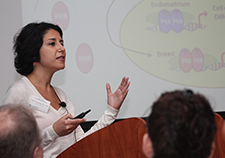 They also learned of new opportunities to tap into VA's landmark Million Veteran Program, which already has rich genetic and health data on more than 390,000 Veteran volunteers.

Lee, a surgeon at the Durham (N.C.) VA Medical Center and Duke University, studies immunotherapy for head and neck cancers. He says his CD award has meant protected time, away from the clinic, during which he could explore his scientific ideas—and feed his passion.

"It lets people like me do what our heart is in. Otherwise, we're pulled in so many different directions—clinical care, teaching, and of course research."

Lee devotes seven-eighths of his time to VA. Of that, six-eighths is set aside for research, and one-eighth for seeing patients. He calls it a "wonderful opportunity. With the CD award, you have the time, the funds, and the structure at a critical point early in your career to make excellent progress."

After the awardees gave PowerPoint talks about their work—and thanked VA and their mentors—they fielded questions about their methods and findings. Listening to the flow of the conversation, one could detect buds of potential collaboration. Sometimes the nexus was obvious—for example, between investigators both studying the genetics of PTSD.

But there were interesting—and potentially fruitful—exchanges even between those working in very different fields. One investigator described the properties of a mouse model she uses to study kidney disease, and one of her peers—who studies oral cancer—said he could see applications for his work.

The medical conditions discussed ran the gamut from PTSD, traumatic brain injury, and bipolar disorder to arthritis, cancer, diabetes, heart and kidney disease, viral infections, and more. One awardee, Dr. Eric Chang from San Diego, shared a new way of imaging tendons—which, unlike other soft tissues, don't show up well on MRIs. His work, said one ORD expert at the meeting, could easily find application in VA rehabilitation research—for example, studies of wheelchair users and the stress they incur to their arms and shoulders.

Myrie said the two-day meeting would ideally connect scientists not only across different diseases, but across the divide between lab and clinic.

"We want to have a natural progression from pre-clinical to clinical studies," says Myrie. "We want the non-clinician to collaborate with the clinician. From the bedside to the lab, and from the lab to the bedside. It works both ways."

In fact, overall, more than half of VA researchers are also clinicians who see patients.

Tackling next phase of research career

CD awardee Dr. Erika Wolf, a psychologist based at VA's National Center for PTSD, said that while she "loves seeing patients," the award has allowed her and her group the flexibility to pursue creative research ideas that might have not fit within the box of other funding mechanisms.

"It's been very fulfilling and productive," she says. "It's allowed us to follow up on our discoveries, and also identify new areas to study. I potentially could have been more constrained. This way, I can say, oh, look what we found here. Let's follow it up with the next logical step, and do it right away, without having to wait to get a grant approved."

One of her research goals is to improve PTSD diagnosis by establishing sub-types of the condition and showing which types respond better to certain treatments—for example, prolonged exposure therapy.

Wolf says that by mainly using existing data sets from the NCPTSD, she was able to "hit the ground running and get a lot done over the past four and a half years or so." She says the transition now to being an independent investigator is challenging, and a bit intimidating—but doable.

"Before I was a psychologist, I had a career as a professional ballet dancer," she shares. "So it's been my trajectory to move through very challenging things. You rehearse them, you figure them out, and then you move on from there."