ORD Home » Currents  » In the works: A 'nano' approach to building bone

In the works: A 'nano' approach to building bone 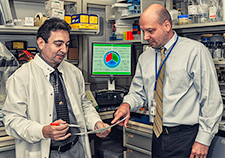 VA scientists in Atlanta are developing a nanoparticle based on the mineral silica that they hope will one day be an alternative to current osteoporosis drugs.

The work is only in the early stages, but co-lead researcher Dr. M. Neale Weitzmann says the particle, called NP1, "is a completely different type of drug and could potentially be one of the first-generation nano-therapeutics if ultimately successful and safe in humans."

NP1, ball-shaped, is only 50 nanometers in diameter. About 2,000 of the particles could line up across a human hair.

Super-tiny particles like these have emerged as a huge trend in drug development. They can potentially be used in "smart" drugs that deliver therapeutic compounds directly to certain organs or types of cells, with less toxicity. A few existing medicines already use the approach, such as the cancer drug Doxil. Several others are in clinical trials. Little is known, though, about the long-term risks and benefits of the approach, and the Food and Drug Administration is watching closely. 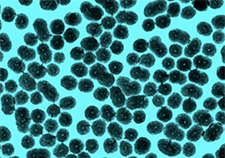 A pseudo-colored microscope image of the bone-building nanoparticles being tested at the Atlanta VA and Emory University. (Image courtesy of Weitzmann/Beck lab)

A pseudo-colored microscope image of the bone-building nanoparticles being tested at the Atlanta VA and Emory University. (Image courtesy of Weitzmann/Beck lab)

A team led by Weitzmann and collaborator Dr. George R. Beck Jr., both with the Atlanta VA Medical Center and Emory University, published their latest results in the May 2015 issue of Nanomedicine: Nanotechnology, Biology and Medicine. They were able to use NP1 to reverse bone loss in aging mice. The nano-drug not only stalled the loss of old bone but also promoted the formation of new bone. Mice that received weekly injections of NP1 over 16 weeks showed increased bone mineral density and volume.

In previous work, the group had shown how NP1 builds new bone in young mice. They had also explored its effects on cells in culture.

The team's chemist Dr. Shin-Woo Ha synthesizes NP1 in the lab starting with a liquid form of silica. This method allows the scientists to control the shape and size of the particles, as well as add in compounds. The final engineered spheres used in the study have a silica shell with a magnetic core that allows the researchers to view the particles with an electron microscope once they have penetrated inside cells. The nanoparticles can also be made with a fluorescent dye bonded to the silica, allowing the researchers to track the particles in cell experiments. The team can also "decorate" the shell with polyethylene glycol. This allows the particles to circulate for a longer time within the mice, thus boosting their biological impact.

The core, made of cobalt and iron, also serves other research purposes. "Because it's magnetic," says Weitzmann, "we can use a strong magnetic field to recover the nanoparticles after they have been introduced into cells. We have used this technique to determine what types of proteins and biochemical pathways the particles interact with inside cells."

The payload, though, is the silica shell—although the scientists aren't sure exactly how it works.

Those changes, says Beck, appear to be due in part to the unique physical structure of NP1.

The delicate dance between osteoblasts and osteoclasts is at the center of the complex cycle of bone repair and renewal that occurs throughout life. Known as remodeling, it works fine through about age 30—when our bone is at its thickest and strongest—but then typically declines slowly and steadily from there. As we age, there is a net loss of bone. Add in negative influences like poor diet and a lack of exercise—along with genetic risk factors, plus any of the many inflammatory conditions that become more common with age—and the result can be osteoporosis. The bones become thin, porous, and easily fractured.

The standard treatment, drugs known as bisphosphonates, may stop bone loss in the short term, but they've been shown to ultimately hinder new bone formation as well—not an ideal solution.

Weitzmann and Beck hope NP1 emerges as a better option, although they are also experimenting with other potential therapeutics. Meanwhile, they still have to learn more about how NP1 works—and whether it could potentially harm, or perhaps help, other tissues in the process of building bone.

"These preliminary studies are encouraging, but it is too early to make the claim that these nanoparticles are fully biocompatible," says Weitzmann. "As with any new drug, extensive toxicology studies are needed, and there are likely to be some side effects on bystander cells or organ system, given that the particles are bioactive. The trick, as with most pharmaceuticals used in clinical practice, is to identify a dose that provides an optimal risk-benefit ratio."