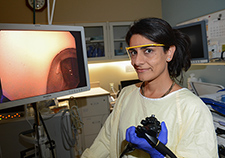 If a colonoscopy seems like the type of thing you'd like to get done with quickly, think again.

Research by a Veterans Affairs team has confirmed that longer-lasting colonoscopies are associated with lower cancer rates.

The findings appeared online July 9, 2015, in Gastroenterology. They were based on nearly 77,000 screening colonoscopies.

Experts already know about the link between colonoscopy withdrawal time and patient outcomes, but the new study provides some of the strongest evidence yet to back clinical guidelines covering this aspect of the procedure.

"Our results support the use of withdrawal time as a quality indicator, as recommended by current guidelines," said lead author Dr. Aasma Shaukat, with the Minneapolis VA Health Care System and the University of Minnesota.

Inspection of colon occurs during withdrawal

In a colonoscopy, a doctor inserts a long, thin tube with a tiny camera fitted to the end into the patient's colon. After the tube is fully inserted, it is then slowly withdrawn. It is during this "withdrawal time" that the doctor carefully examines the lining of the colon, looking at a view of the colon on a monitor in the exam room. Any small growths, or polyps, are removed with the scope's snipping tool and sent for biopsy. These growths may grow into cancer within a few years.

According to current guidelines, a "normal" colonoscopy—one in which there is no finding of cancer or pre-cancerous growths, and the doctor does not remove any snippets of tissue to be biopsied—should have a withdrawal time of at least six minutes.

Shaukat's team looked at data on colonoscopies performed over six years by 51 gastroenterologists in a large community practice in Minnesota. The team calculated average withdrawal times for each doctor. The average for the practice on the whole was 8.6 minutes—well within guidelines. But about 10 percent of the doctors had individual averages of under six minutes.

The researchers then checked the state's cancer registry to look for cases of colorectal cancer among patients who had been screened at the same practice during the study period.

Withdrawal times of longer than eight minutes didn't seem to afford any extra reduction of risk. As such, the researchers say focusing quality-improvement efforts on withdrawal times of under six minutes would likely have the most impact.

The study included cancers that occurred within about five years of the patient's last colonoscopy. The assumption is that such "interval cancers" might have grown from polyps that were present during the colonoscopy but not detected, or not fully removed.

Shaukat says the reasons for sub-standard withdrawal times may vary, but "generally, every physician aims to do a complete inspection of the colon lining, regardless of their withdrawal time."

Even the American College of Gastroenterology acknowledges that not every colonoscopy withdrawal must take at least six minutes, as some colons can be examined effectively in under six minutes.

Just the same, Shaukat says that withdrawal time appears to be a "robust indicator" of interval cancer risk. She urges more research on the topic, and on related quality measures for colonoscopies.

"We need to understand the quality indicators better, define thresholds, and be able to adjust them to the particular patient population and underlying risk. Until there are uniform methods for data collection, adjustment, and collection, the numbers don't mean much. We might be comparing apples to oranges."

Shaukat says it's appropriate for patients to ask their gastroenterologists if they collect and review quality metrics for their colonoscopies. At the same time, though, she points out that most patients won't be in a position to properly make sense of the actual data.

"The exact metrics and their cut-offs are debatable, but a commitment to quality needs to be there for every practice."