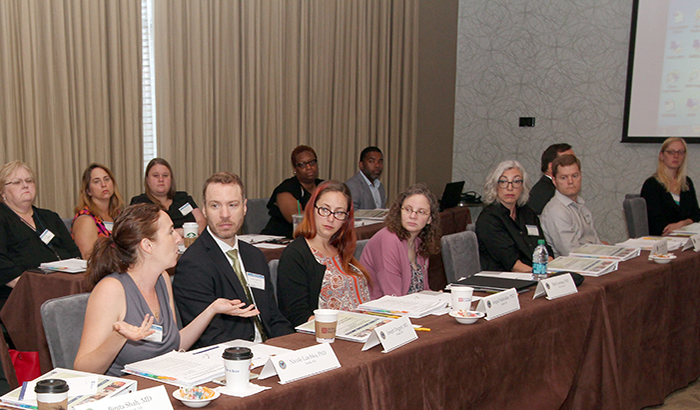 Dr. John Kaplan, an Air Force Veteran and director of VA's Technology Transfer Program, shows attendees at the CDA meeting a booklet his office has developed to guide them in disclosing inventions and intellectual property, and working with VA on patents, licensing, and commercial development. (Photo by Mitch Mirkin)

Dr. John Kaplan, an Air Force Veteran and director of VA's Technology Transfer Program, shows attendees at the CDA meeting a booklet his office has developed to guide them in disclosing inventions and intellectual property, and working with VA on patents, licensing, and commercial development. (Photo by Mitch Mirkin)

If you happened to be in the nation's capital in late July looking for a roomful of very smart people, you couldn't have done better than a small hotel about half a mile from Union Station.

That's where some 40 early-career researchers came together for the annual VA Career Development Awards (CDA) meeting. All were recipients of CDA funding for biomedical or clinical research, and had completed either the first or third year of their award, which runs three to five years. VA also has CDA programs for health-services and rehabilitation researchers.

The VA programs are highly competitive, and the M.D.s and Ph.D.s who get funded are considered an elite group. The CD awards serve not only to recruit these keen minds into VA in the first place, but also to train them in research and then keep this vibrant talent pool in VA, devoted to Veterans' health.

By all accounts, the program is effective: Among past biomedical and clinical awardees, 7 in 10 have remained in VA, and many of these have gone on to establish independent VA research careers.

Sharing successes, as well as challenges

The D.C. event was part scientific symposium, part nuts-and-bolts workshop, and part support group. What does it take to overcome the hurdles and navigate the passage from junior, mentored CDA researcher to independent investigator? The attendees shared their success stories as well as their trials and tribulations. They gleaned advice, encouragement, and inspiration from their peers, and from the scientist-administrators in VA's Office of Research and Development who oversee their funded projects.

Dr. Rachel Ramoni, VA's chief research and development officer, had this to say in a welcome letter that was part of the meeting binder:

"We are investing in you, and we'd love for you to stay in the VA."

"Over several decades the CDA program has trained highly qualified physician-scientists and non-clinician scientists who are focused on accelerating discoveries to the clinic to improve the health and well-being of Veterans. The VA CDA is one of the most competitive career development programs in the nation, and you now join the ranks of many individuals who have received this award and gone on to distinguish themselves as thought leaders in...research both inside and outside the VA."

Ramoni also offered brief remarks and led a spirited and candid Q&A with the group to kick off the two-day event.

"We are investing in you, and we'd love for you to stay in the VA," said Ramoni, who came to VA from Harvard earlier this year. "We'd love, above all, for you to contribute to science and to the real-world care of Veterans. We are here to make Veterans' lives better."

Asked about problems they've run into in their budding research careers, the attendees shared tales about fighting red tape—mainly within their local VA, but occasionally in the affiliated universities where they also hold appointments—in areas such as hiring and retaining lab personnel, securing space, and purchasing needed supplies.

One awardee, Dr. Paul Garcia, wryly said he has become a "connoisseur" of these types of issues, eliciting chuckles and nods of agreement from his peers. Garcia, who studies how HIV drugs can be toxic to the brain, suggested that VA Research at the national level work more closely with local VAs to smooth out bureaucratic bumps that could slow researchers' progress.

As issues were aired and potential solutions discussed, Ramoni also focused on the big picture: She urged the group to stay riveted on their scientific passions. She also encouraged them to move out of the research silo and "make connections that will help you translate your findings into the clinic."

She added: "In academia, the coin of the realm is publications, presentations, grants. I might meet one of our researchers and ask, how is your research going? And they'll say, 'Well, I have five publications so far, and I've made presentations at this conference and that conference...' Our Secretary and VA leadership won't be thrilled if I measure our success in terms of publications alone. They are looking for impact on care in the VA and on the progress of science." 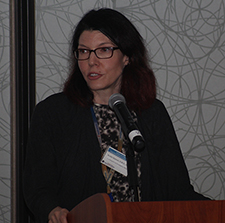 Looking for collaboration and synergy

A good chunk of the two-day meeting was devoted to brief PowerPoint presentations from each researcher. They shared findings, methodology, insights.

Dr. Ken Myrie, a portfolio manager in ORD who helps manage the biomedical and clinical CD programs, advised the attendees to pay close attention in order to glean nuggets relevant to their own work.

"Who can you collaborate and synergize with? Who has resources you need?"

Dr. Nicholas Walter, for example, of the Denver VA Medical Center, talked about new blood markers that show how well tuberculosis drugs are working. One benefit of the research could be shorter drug regimens—and therefore fewer side effects. His group is collaborating with teams in Uganda and Vietnam.

Dr. Angela Ozburn, from the Portland VA, described her research aimed at reducing binge drinking. The work involves mice that are exposed to a "happy hour" of sorts, she said. "They get quite boozy."

Dr. Nicole Liachko, of Seattle, discussed how her VA lab has homed in on a worm model that can show neurological symptoms similar to those of ALS, or Lou Gehrig's disease. By studying the worm, they learned that an enzyme called calcineurin protects against harmful brain lesions. One lesson they've gleaned is that medications that block calcineurin, used to treat some skin ailments, may pose brain risks.

Each of the two days featured a working lunch. Over salads and sandwiches, the scientists talked shop: genes, mouse models, statistical methods. They also got face-time with the program managers who oversee their Career Development projects. 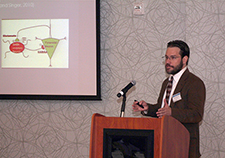 A highlight of the event was a talk from Dr. Clifford Cho, a physician-researcher at the Ann Arbor VA who studies cancer and specializes in treating Veterans with melanoma, a common skin cancer.

A graduate of the VA Career Development program, Cho is now on his second VA Merit Review award. His focus is immunotherapy, which has been emerging as one of the most promising new cancer treatments. The idea is to not assail tumors from outside the body—through drugs, radiation, or surgery—but to attack them from the inside, through the body's own immune system.

Cho's lab has shown how certain types of T cells—which attack foreign tissue, including cancer cells—end up being defenseless against the malignant cells. They even go on to kill themselves, rather than continue fighting. But certain T cells, known as memory cells, "are uniquely resistant to cancer," and therefore may be the holy grail of immunotherapy. His lab showed how mice injected with melanoma tumors reacted favorably to treatment with memory cells, whereas tumors grew out of control in mice treated with other types of T cells.

The challenge now for Cho's lab is figuring out how to make large quantities of memory T cells available for cancer therapy, as they exist only in tiny amounts in the body.

Cho wove motivational messages into his science presentation, targeting those who are still in the midst of their Career Development awards and pondering the next phase of their VA research careers. His talk was suffused with warmth and self-effacing humor.

"We're all figuring out how to do this," he shared. He told funny anecdotes about finding a mentor, and encountering unexpected "landmines" in trying to hire and retain good lab staff. "The hardest thing about this is not the science—it's human resources!" he said, perhaps only half joking.

Cho and the other presenters expressed huge gratitude not only to their mentors and colleagues, but to the Career Development program.

"This CDA has been fantastic," said Dr. Alan Morrison, a physician at the Providence (Rhode Island) VA who studies artery disease. "Without this, I wouldn't have a lab."

Dr. Louise Hecker, who, like Cho, has transitioned from CD awardee to full-fledged investigator with funding—in her case, not only from VA, but also from the National Institutes of Health and the Department of Defense—delivered a talk on day two titled "How to be a successful CDA awardee." Hecker, with the VA Southern Arizona Healthcare System, studies injury repair in aging, with a focus on lung tissue. In a publication in a high-impact journal in 2014, her team described their discovery of a pathway through which they could reverse fibrosis—the buildup of scar tissue—in mice. They hope to translate the work to human patients.

Like Cho, she talked about failure, rejection, hurdles. And she offered a plethora of practical tips for early-career VA researchers, in areas such as goal-setting and team-building.

She said the CD program has meant "everything" to her. Reflecting on her achievements to date, she added: "It gave me protected time, without the usual pressures, to really develop the work. I'll always credit it for allowing me to be able to do all this."