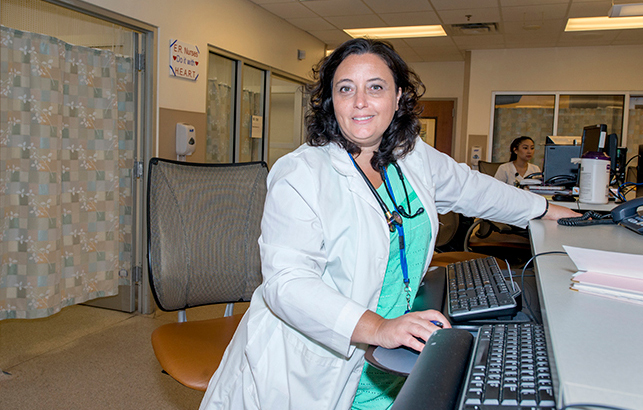 Dr. Melissa Stevens, an internist in the emergency department at the Atlanta VA Medical Center, is leading a project designed to enhance the safety of prescribing for older patients in the ED. (Photo by Lisa Pessin)


It's long been a troubling pattern in hospital emergency departments when it comes to older patients: prescribing drugs that carry risks that outweigh the intended clinical benefits, despite evidence of equally or more effective and safer medications.

Such drugs are called potentially inappropriate medications, or PIMs.

PIMs rarely result from reckless decisions by doctors. Emergency departments (EDs) host many elderly patients with possible life-threatening conditions. Staff members are pulled in many directions in fast-paced, potentially chaotic environments to make sure these patients receive proper treatment. Plus, not all ED physicians have access to the most up-to-date geriatric medication order sets. Consequently, standard drugs such as muscle relaxants, antibiotics, and anti-inflammatories, if not prescribed correctly, may cause side effects and other complications in elderly patients not seen in younger people.

With an eye on the problem, VA researchers launched a quality improvement initiative to help providers better administer the safest drugs to older Veterans who are discharged from an emergency department. Veterans age 65 and older account for about 40 percent of all ED visits, and nearly two-thirds of those patients leave with a new prescription.

"Ultimately we want to show that we've impacted the patient outcomes."

The initiative—called the Enhancing Quality of Provider Practices for Older Adults in the Emergency Department (EQUiPPED)—has been implemented at 10 VA facilities and has impacted more than 40,000 Veterans thus far. The researchers have reported data on four of those sites, all of which have showed a "significant and sustained" reduction in the use of PIMs. They documented the number of PIMs prescribed to Veterans 65 and older who were discharged from an ED for at least six months before the first EQUIPPED intervention at each site, and for at least 12 months after the final EQUiPPED intervention.

Each site carried out the program's three main elements: 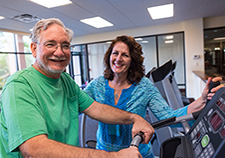 "The EQUiPPED intervention provides another step toward creating an age-friendly health care system by improving provider prescribing practices for older adults in the ED," the researchers write. "EQUiPPED influenced provider behavior through strategies that simultaneously improved provider workflow and reduced PIMs for older adults discharged from the ED. Older adults are more susceptible to adverse drug reactions, particularly with the addition of a new medication in the setting of the use of multiple drugs by a patient to treat one or more chronic conditions."

Dr. Melissa Stevens, an internist in the emergency department at the Atlanta VA Medical Center, is leading the EQUiPPED project. She says every older person she knows of, including her mother-in-law, has at some time been prescribed a PIM.

"I don't think anyone sets out to prescribe PIMs," Stevens says. "We just wanted to make sure that when people are prescribing PIMs—and our goal is never to get to zero—that they're doing it thoughtfully, and that they understand that this medicine does have side effects that may impact this patient. Also, they need to really think about the risk and benefit before prescribing the drug and consider what the alternative treatment regimens are. They should have easy access to information and should be able to make the best choice for this patient."

Stevens adds: "In VA, we see a lot of patients who come in for treatment in the emergency department and get released. They are really coming in as sort of a gateway to their access to primary care. A lot of them are older patients who are transitioning to care in the VA, and sometimes the emergency department is their first encounter with the VA health care system. I was really interested in how providers handle that."

As part of EQUiPPED, it's imperative that each VA site create order sets that are aimed at recommending drugs for older patients. Stevens explains that the emergency departments at the 10 sites already had order sets, but that none of the sets were tailored to older patients and that many of the recommended drugs were inappropriate for the elderly to consume.

At the Atlanta VA, which was the first site to implement EQUiPPED in 2012, Stevens and her team created order sets in more than 10 drug categories: antibiotics, cardiovascular, dermatology, diabetes, gastrointestinal, gynecology, neurology, rheumatology and pain, psychiatry, pulmonary, and urology. After listing the possible conditions in each category—diarrhea, pneumonia, and the lung disease COPD, for example, are under antibiotics—the team met with a clinical pharmacist who reviewed the drug choices and helped determine which ones are safest in older patients, as well as the proper doses.

The new order sets took into account the American Geriatric Society's 2012 Beers Criteria, which lists PIMs to be avoided in older adults, with a focus on the side effects. The Beers list, which is widely used in the medical community, was updated in 2015.

The order sets were incorporated into VA's electronic medical records program, or the Computerized Patient Record System (CPRS). Physicians access the CPRS when trying to prescribe drugs or order X-rays and supplies. Previously, the provider needed to know the name of the drug he or she is seeking for an older person and the correct dosage, or would need to contact the pharmacist for such information. Now, if the diagnosis is shingles, "You click on the geriatric order set and you look under dermatology and under shingles, and it tells you," Stevens says. (Given that VA has announced it will be transitioning from CPRS and adopting DoD's electronic medical records system to allow for seamless care between the agencies, the EQUiPPED order sets will have to be rebuilt, according to Stevens.)

The order sets created by the Atlanta VA became a reference tool for other VA sites in the EQUiPPED program, although each site has had to design its own sets. In addition, not all of the sites have the resources to incorporate as many drug categories as the Atlanta facility.

The Durham VA, for one, created nine geriatric-specific order sets for use in its emergency department. As part of the educational aspect of EQUiPPED, the site hosted a specialist in geriatric pharmacology from the Atlanta VA. That person did Power Point presentations showing screen shots from the order sets created in Atlanta. The presentations familiarized the physicians and residents at the Durham VA with some of the more common conditions for which older patients are seen and with the proper drugs to prescribe in those situations.

The providers in Durham also received laminated cards with Beers list information and were able to upload an App to their smartphones with the order sets.

Doctors in the ED at the Durham VA see about 100 patients per day, close to 40 percent of whom are 65 and older, says Dr. William Knaack, who served as site director for the EQUiPPED project. About half of those older than 65 are discharged from the emergency room with prescriptions, he says. Their most common ailments are linked to cardiac, pulmonary, and musculoskeletal conditions.

To prescribe the safest drugs for elderly patients, Knack explains that he and his colleagues at the Durham VA "incorporated decision-making tips based on Beers list medications."

"So if somebody came in for back pain, for example, we would recommend using non-pharmacotherapy recommendations instead of muscle relaxers," he says. "Muscle relaxers overall are not that great a medication. They're not very effective. But in a young person, you throw it at them and say, 'If it works, great. If it doesn't, don't use it.' The side effects are minimal for young people when using muscle relaxers. You take that exact same medication and give it to an older patient, now the risk of complications, the side effects, is greater than the benefit.

"Also, there are certain antibiotics that are safer for older patients, so we would write order sets that would allow the provider to select the right antibiotic," he says.

Program will extend to non-VA sites

In terms of incorporating EQUiPPED through the VA system, Stevens is creating an HSR&D (Health Services Research & Development) proposal that would look at ways to educate providers at VA hospitals on the safest geriatric medications. Although the current order sets are essentially the same at all VA facilities, she says, it's not feasible for each site to recreate the Atlanta VA's geriatric order sets. Someone with the screen shots in hand would have to create them locally, she says.

Regarding non-VA sites, a three-year program is underway to implement EQUiPPED in the emergency departments at Grady Memorial Hospital in Atlanta, Mount Sinai Hospital in New York, and Duke University Medical Center in Durham. Stevens says those sites were chosen because they are academic affiliates of VA facilities that are part of the EQUiPPED project, and because they use the same electronic medical records system, called Epic.

She says the Grady site is using the same geriatric order sets for all of the conditions studied by the Atlanta VA. The only difference is that the "screen shots look different because Epic is set up differently than CPRS," she says. "But potentially it could be implemented in any electronic medical records system."

At the same time, she explains that insurance companies present an obstacle for a non-VA hospital to adopt a program such as EQUiPPED. She describes VA as a closed health care system that consists of the same standard list of recommended medications, or a formulary, with minor variations from site to site. In contrast, private facilities treat patients who use a myriad of insurance companies, leading to problems for creating order sets, she says.

"In VA, we know what medications people are supposed to be using, even though there's some minor differences from site to site in the local formulary," she says. "We can say for a diagnosis like shingles this is the preferred formulary at VA, and this is how you dose it, and this is what we recommend you use. In the emergency room at Mount Sinai, you have patients who have AETNA, Blue Cross, Medicare, all these different insurers. They all have different formularies. It would be challenging to try to create multiple order sets, one for AETNA patients, one for Blue Cross patients, one for Medicaid patients, and one for Medicare patients."

As she proceeds with testing EQUiPPED to see how effective it can be, Stevens is confident that it has the potential to make medical care much safer for older adults.

"We know that we've reduced the use of PIMs in a statistically significant way and have had a sustained reduction in that," she says. "We've alerted physicians who work in these departments to more uniformly conform to best practice guidelines and to be prescribing fewer medications that are potentially inappropriate. But ultimately we want to show that we've impacted the patient outcomes. We would like to look at the impact on patient care such as less repeat emergency room visits or less hospitalizations after an emergency room discharge. Those are outcomes we're interested in."