Nick Mezak (left) and Dr. Ngan Huang look on as Nick McMenomy tends to a cell culture inside a biosafety cabinet. (Photo by Adan Pulido)

Two of a Kind 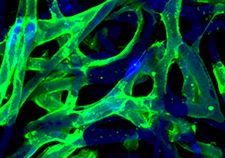 This microscope image shows one of the 3D microfiber scaffolds created by Nick Mezak and Nick McMenomy in the VA lab of Dr. Ngan Huang. (Photo courtesy of Huang lab)

This microscope image shows one of the 3D microfiber scaffolds created by Nick Mezak and Nick McMenomy in the VA lab of Dr. Ngan Huang. (Photo courtesy of Huang lab)

In addition to having the same first name, Nick Mezak and Nick McMenomy both served their country in the Marines. In fact, they spent time together in a Marine expeditionary unit in Japan, Singapore, and the Philippines, and depended on each other “countless times,” as one of them put it.

They have other things in common, too.

For one, both have experience conducting research in the lab of Dr. Ngan Huang, a biomedical engineer at the VA Palo Alto Health Care System in California. The research is centered on cardiovascular tissue engineering, a way of creating artificial pieces of blood vessels and heart tissue using bioengineering principles. The goal is to build a biological heart with human stem cells, a feat the medical community has been striving for to offset the shortage of donated organs and assist those in need of a transplant.

Mezak, 32, has interned in the lab for more than three years. He has pursued research that involves creating three-dimensional scaffolds that organize the structure of engineered tissues.

Two Veterans with a common mission

He uses a technique called electrospinning to make the scaffolds. It creates tiny fibers for use in many biomedical and industrial applications, including tissues for treating cardiovascular disease. His contributions have led him to co-author two studies on cardiovascular-related stem cell research, one published in Biomaterials Science in July 2017 and the other in Cellular and Molecular Bioengineering in August 2017.

"It has allowed me to work alongside and learn from some of the most gifted and passionate scientists in the country."

McMenomy, 34, has worked in the lab since June as summer intern under a U.S. Department of Education science and engineering program. He has collaborated with Mezak on the creation of three-dimensional scaffolds.

Both are grateful for the opportunity.

“It has allowed me to work alongside and learn from some of the most gifted and passionate scientists in the country,” Mezak says. “Dr. Huang has structured her lab so that all members work as a team and stay involved in many different projects. The insight from working in the lab has brought a lot more value and practical understanding of my coursework as a bioengineering student.”

McMenomy finds the experience even more fulfilling because of the chance to develop a treatment that could benefit those who, like himself, once served.

“Nick [Mezak] and I are truly dedicated to helping the doctors in the lab be successful in any way we can, and hopefully we can help save someone’s life someday,” he says. “The fact that we might be able to save a fellow Veteran’s life makes our research all the more important to us.”

After serving in the Marines, both men began their undergraduate studies at Cañada College, a community college in Redwood City, California. The school has a large Veteran student body and offers much support for returning service members, encouraging them to network and hone their leadership skills in the community. In 2014, Huang gave a presentation about her lab’s research to Veteran students at Cañada, piquing Mezak’s interest in working under her auspices.

While doing so, Mezak studied biology at Cañada before transferring last year to San Jose State University, where he expects to earn a degree in biomedical engineering in May 2018. Appreciating the wealth of knowledge and experience one could attain in Huang’s lab, he encouraged McMenomy and other Veterans interested in engineering to take part. McMenomy studied at Cañada College and at the nearby College of San Mateo, where he focused on physics, math, and engineering. He’s now beginning at San Jose State with a major in aerospace engineering.

“I was discharged several years before Sgt. McMenomy,” Mezak says, “but the leadership skills that he helped instill in me allowed me to guide fellow Veterans through the transition process of returning to school. Cañada College’s Veteran organization is really big on this. Many Veterans helped guide me when I returned, so I tried to return the favor. I definitely encouraged Nick, but his dedication and hard work deserve the credit.”

Both men are interested in continuing to work part-time with Huang this fall.

Huang, who is also an assistant professor of cardiothoracic surgery at Stanford University, never served in the military. But she feels that reaching out to Veterans makes sense because she’s unaware of any biomedical research internship programs that cater specifically to Veteran undergraduate students. Many Veterans are missing out on biomedical research opportunities, she says, stressing that she is committed to advancing the research careers of former service members.

“Veterans are underrepresented broadly in STEM [Science, Technology, Engineering, and Math] and specifically in biomedical research,” Huang says. “Allowing Veteran undergraduate students to become exposed to research might have an important influence on propelling a future career in research.”

She recognizes the sacrifice that Veterans make for the United States.

“Most Veterans are older than their peers in college,” she says. “Pursuing an advanced degree such as a master’s or a Ph.D. may mean that they become even older after completing that degree. For that reason, I can see why many Veterans may not want to pursue advanced degrees. However, if Veterans are motivated by their research, that may help them as they work toward a master’s or Ph.D.”

She adds: “Research allows for practical application and reinforcement of concepts learned in class. Those are other reasons why research is helpful in educational development.”

Both Veterans say they’ve learned a lot from Huang. Mezak has gained a clearer understanding of how both physical and biological factors play a key role in developing healthy tissue. “This combination of engineering principals is used to design and conduct meaningful research experiments,” he says.

He says it’s important that the lab is working on tissue engineering to treat cardiovascular disease, a leading cause of death in the United States.

“Major advancements in the treatment of cardiovascular disease have been made in the past four years,” Mezak says. “Dr. Huang’s lab has been at the forefront of developing new strategies in this field. The opportunity to conduct hands-on experiments in a professional setting using the principles being taught in my coursework is a huge addition to my education.”

Bioengineering concepts and material engineering for aerospace applications overlap considerably, says McMenamy, who notes that he’d someday like to do research for the U.S. space agency, NASA.

“This is my first internship, and I felt that learning about tissue engineering would be an interesting challenge for me and give me experience I can build on in the future,” McMenomy says. “Dr. Huang has given me a great opportunity to innovate in a real research environment, which will be helpful for me as an aspiring engineer.”

Depending on funding and space, Huang says she plans to bring in more Veterans from Cañada College and other schools to work in her lab. The more scientifically gifted students who are applying their minds to create an artificial heart, the better, she surmises.

“In cases of heart failure, organ transplantation is currently still the best solution, but there are not enough organ donors to meet the demands of the recipients,” she says. “For this reason, many patients on the waitlist die before receiving a suitable replacement. Cardiovascular tissue engineering aims to engineer a biological heart to [offset] the shortage of donated organs. Given the complexity of the heart’s geometry and size, tissue engineering of the heart is a huge challenge.”

With Huang’s passion for creating an artificial heart, plus her eagerness to integrate Veterans into the sciences, don’t be surprised if Mezak and McMenomy are just two in a long line of Veteran students who thrive under her tutelage.

“It’s important to me that we recognize Dr. Huang for creating this opportunity,” Mezak says. “She has encouraged Veterans in community college to apply their skills gained from military experience to serve the community, while at the same time allowing them to develop and learn new skills necessary to thrive in their future careers. Although I do not receive course credit from my work in the lab, this experience has brought much more value and meaning to my coursework.”

Two Veterans with a common mission 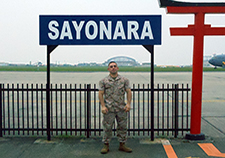 Nick Mezak and Nick McMenomy say military service forges bonds that are tough to replicate in a civilian work environment. But the two men, who gained respect for one another in the Marines, maintain a professional chemistry to this day as student researchers in Dr. Ngan Huang’s lab at the VA Palo Alto Health Care System in California.

“Nick and I served together in the Marine Corps, and he has been a great friend and mentor through my transition out of the Marines and starting school,” McMenomy says. “Having the opportunity to work together with him and to help create new treatments for other Veterans has been an honor. I appreciate this opportunity very much.”

McMenomy served in the Marines from 2003 to 2013. He spent his first enlistment at Marine Corps Air Station Cherry Point in North Carolina, before transferring to Marine Corps Air Station Yuma in Arizona. He was a sergeant in Marine Attack Squadron 311, which is located at the Yuma base, and worked as an aviation technician on AV-8B Harrier fighter jets, known as “Tomcats.” 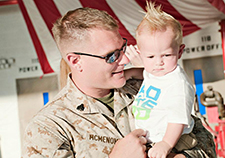 Mezak was a parachute rigger and aviation technician in the Marines from 2006 to 2011. A sergeant, he was also based at Marine Corps Air Station Yuma, where he spent time with an aviation logistics unit before transferring to Marine Attack Squadron 311. Like McMenomy, he went on many overseas deployments, an experience that “opened my eyes to cutting-edge technology and how it can have a positive impact on people worldwide,” Mezak says.

Mezak is proud to now have the chance to improve the lives of other former service members.

“The members of the Huang lab are extremely passionate about helping veterans through their research and outreach,” he says. “Part of being a Veteran is taking care of other Veterans. We all share a common bond. I would like to see more Veterans become involved in research. It is a great opportunity for us to help each other heal and become leaders in the community.”