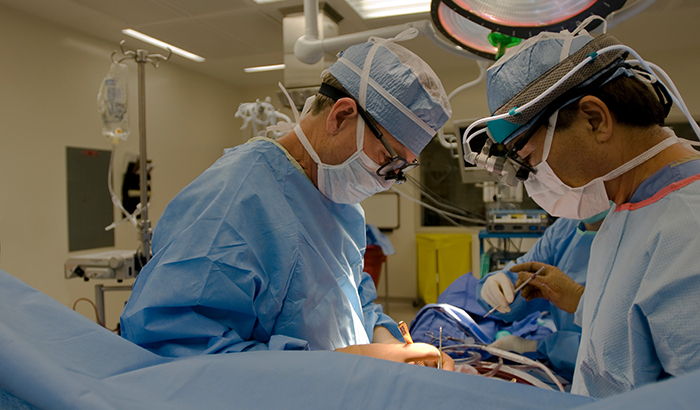 Doctors performed some 145,000 isolated coronary artery bypass surgeries in the U.S. in 2016, according to the Society of Thoracic Surgeons. (Photo: ©iStock/KentWeakley)

Among heart surgeons, a hot debate has centered on the pros and cons of two ways of doing coronary artery bypass surgery. The procedure restores blood flow to the heart when arteries are blocked with plaque.

Conventional "on pump" surgery, around since the middle of the last century, uses a pump that takes over the job of the heart and allows doctors to stop the organ, making it easier to operate. Another method, which has enjoyed renewed interest since the mid-1990s, is "off pump" surgery: It avoids the pump—and some potential complications, according to many experts—but can be a trickier procedure.

Now, VA researchers have reported five-year outcomes from more than 2,200 Veterans who underwent heart bypass surgery at 18 VA medical centers between 2002 and 2007. The patients—almost all men, with an average age of around 63, and most having multiple illnesses and two to three diseased blood vessels—had been randomly assigned to traditional "on pump" surgery or the less conventional "off pump" method.

The main outcome measure—how many patients died during the five-year follow-up, from any cause—favors the on-pump group. They had an 11.9 percent rate of death, versus 15.2 percent in the off-pump group. This represents a 28 percent higher risk for the off-pump patients.

"This is a moderately sized, clinically relevant difference," notes lead author Dr. A. Laurie Shroyer, lead author on the new report, which appeared online Aug. 17 in the New England Journal of Medicine.

In light of these and other findings from the study, the authors conclude, "It appears that innovative surgical approaches—such as the more technically demanding off-pump procedure—may not always provide superior clinical outcomes."

The upshot of the study, they say, is that on-pump should be the method of choice for most patients needing heart bypass surgery. Certain unusual clinical factors, they say—such as a severely stiffened aorta—could weigh in favor of off-pump.

Study had reported initial results in 2009

The study, which published its one-year outcomes in the New England Journal of Medicine in 2009, has been one of the world's largest and most rigorous trials comparing the two methods of heart bypass surgery. It was sponsored by VA's Cooperative Studies Program.

Shroyer, a researcher at the Northport (New York) VA Medical Center and professor and vice chair for research for surgery at Stony Brook School of Medicine, led the research along with Dr. Frederick Grover, a cardiothoracic surgeon with the Denver VA Medical Center and the University of Colorado; and Dr. Brack Hattler, a cardiologist at the Denver VA.

The initial results reported in 2009, like the latest ones, favored the on-pump method. Of note, the study found no evidence that the pump method was more likely to result in cognitive problems, which was one historical concern.

One criticism of the study was that the VA surgeons who performed the off-pump surgeries did not have enough experience with the technique to achieve ideal outcomes, leading to an unfair edge for the on-pump group. Some experts claim that surgeons need to have done upwards of 200 such procedures to get optimal results.

But that view is refuted by the VA authors. In 2015 they published an analysis, based on data from the trial, showing no difference in outcomes whether the primary surgeon was a less-experienced resident working under the guidance of an attending surgeon, or a more-experienced attending surgeon.

Shroyer notes that her team also did a "sensitivity analysis" in which they statistically backed out any cases in which surgeons had less than 50 pre-study off-pump cases under their belt. Even after this adjustment "there was no difference in the original trial's findings," she says.

Grover, who completed medical school at Duke in 1964 and has been a board-certified surgeon since 1970, says: "I think the first 25 cases are the steepest part of the learning curve [in off-pump heart surgery], and after that it levels off. You may pick up more things to about 50 or so cases, but after that I would think you're at the level where you're going to be."

He adds, "Our 30-day and one-year mortality and major adverse outcomes were just as good as, or a little better than, those in the other two major prospective randomized trials [comparing off- to on-pump surgery]," even though the surgeons in those trials tended to have a lot more experience.

Most importantly, the authors note, their results fall well within the prevailing standards for surgical outcomes. They suggest that the talent and skill of individual surgeons may play a huge role, besides sheer numbers of surgeries performed.

A downward trend in use of off-pump method

As it is, off-pump surgeries already have seen a downward trend, especially in the U.S.

"There's been a decline in U.S. rates of off-pump that has been dramatic," says Shroyer.

Using data from the Society of Thoracic Surgeons, a team that included Shroyer and Grover reported in 2014 that after its debut in the 1990s, off-pump heart bypass peaked in 2002, accounting for 23 percent of all bypass surgeries performed, but then declined to 17 percent by 2012. The recent 2016 annual report of the Society of Thoracic Surgeons showed further decline, to 13.1 percent, says Shroyer.

The trend, she says, may be attributable in part to the original study findings her group reported in 2009, along with similar findings from other major trials. She points to a Cochrane Database Systematic Review from 2012 that recommended, after summarizing the best available evidence, that on-pump should continue to be the standard approach for most bypass patients.

"Our trial was included in the Cochrane review," notes Shroyer. "We were one of the studies with a very low risk of bias, and we had one of the larger volumes of patients." She says to the extent that the initial VA findings impacted clinical practice, it was likely due in large part to "being part of this comprehensive Cochrane assessment."

She and Grover hope the latest findings will also help influence practice, and provide useful guidance for surgeons who may be wrestling with the decision of which approach to take for particular patients.

Grover points to one aspect of the initial findings from the study—those published in 2009—as perhaps part of the reason why off-pump has shown an edge. The team found then that in the off-pump procedures, surgeons were less likely to complete all the grafts they set out to do. Doctors examine coronary angiograms prior to the surgery to identify which coronary arteries are blocked. There are two main coronary arteries, and a handful of smaller ones that branch off from the main ones, all supplying blood to the heart. When they do the grafts, doctors take a healthy piece of vein from elsewhere in the body and sew it in place as a detour between the heart and a point in the problem artery below the blockage. As long as the graft remains open—"patent," in medical terms—the heart enjoys a renewed flow of blood.

"Our initial trial and a lot of other trials showed that if you estimate how many [coronary arteries] you're going to do preoperatively, based on the [angiogram], and then put down how many you actually did, the percent is higher in the on-pump group, in terms of completing the grafts that you planned," says Grover. "And that would lead you to think that there are probably some ischemic [blocked] areas in the heart that haven't been revascularized that the off-pump patient may pay for later on."

To read more about the initial results from the trial, go here. To learn more about VA research on cardiovascular disease in general, please visit www.research.va.gov/topics/cardio.cfm.