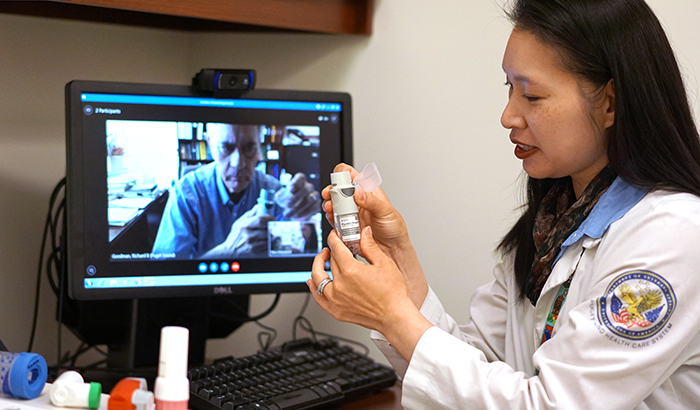 "The inhaler training can't be done over the phone because the person doing the training needs to be able to see how the Veteran is using the inhaler. That's why home videoconferencing is so helpful."

Many people with chronic obstructive pulmonary disease, a respiratory disease, use inhalers to deliver medications that are intended to open up their breathing passages.

Unlike oral medications, however, inhaler use is a skill that must be taught and reinforced. An inhaler device requires proper technique and positioning to deliver medication to the lungs. But 90 percent of COPD patients use their inhalers incorrectly, with errors in use leading to worsening symptoms and increased hospitalizations, according to researchers who carried out a VA-funded pilot study on inhaler training.

The study, published in July 2017 in Respiratory Care, provided Veterans with COPD three monthly, internet-based, one-to-one sessions with a pharmacist through videoconferencing. The pharmacist used the "teach-to-goal" (TTG) method, in which patients are observed in repeated cycles using their inhaler, provided feedback, and then observed again.

A total of 41 participants completed at least one home videoconference visit, and 38 completed all three visits. The participants reported increased self-confidence in inhaler use, with technique improving for patients on average, as well as upgrades in quality of life and adherence to medication plans.

The patients who experienced major improvements relied on inhalers often used for COPD: the albuterol-metered-dose inhaler, the budesonide/formoterol metered-dose inhaler, and the tiotropium dry powder inhaler. The Veterans using these inhalers improved in technique during each pharmacist visit, with that improvement being maintained after two months, the researchers say.

A 'promising approach' for patients with COPD

The study showed that "inhaler training provided by a pharmacist using TTG methodology delivered by novel home internet-based videoconference technology is a promising approach to improving inhaler technique for patients with COPD," the researchers wrote. This approach can "improve objective measures of inhaler technique within a single visit and [can be] sustained over time."

The study's lead investigator, Dr. Vincent Fan, is a physician in pulmonary and critical care at the VA Puget Sound Health Care System in Seattle. He gained interest in pursuing the study after noticing that many of his patients with COPD were not using their inhalers correctly. He learned that VA Telehealth Services had launched a program called Clinical Video Telehealth into the Home that would make it possible for patients to get inhaler training using their home computer.

"This seemed like a great way to provide inhaler training to patients and a way that might make it easier for them so they wouldn't have to drive into the clinic for training," Fan says. "The inhaler training can't be done over the phone because the person doing the training needs to be able to see how the Veteran is using the inhaler. That's why home videoconferencing is so helpful."

Chronic obstructive pulmonary disease is a lung disease that can affect breathing. The disease, one of the leading causes of death in the U.S., includes two main conditions: emphysema, in which the air sacs of the lung are damaged and enlarged; and chronic bronchitis, a long-lasting cough caused by chronic inflammation of the bronchi. Most people with COPD have both conditions.

Cigarette smoking is the most common cause of COPD. Other potential causes include secondhand cigarette smoke, air pollutants, and dust. Veterans are much more likely to develop COPD than the general population and may suffer from other respiratory problems due to exposure to infectious agents and other environmental substances. Tuberculosis, lung cancer, and pneumonia are respiratory diseases that may be caused by infectious agents.

Most patients with COPD are treated with inhaled drugs that are able to relax the airways of the lungs, where the medications act to improve breathing. Some oral medications are used for COPD, but most COPD patients who use pills also use inhaled medications, Fan says.

Previous TTG inhaler training studies with hospitalized COPD patients showed reduced inhaler misuse, with proper technique being maintained at a 90-day follow-up. "We wanted to see if this inhaler education approach could also work for outpatients, and whether it could be done over video conferencing to the patient's home," Fan says.

The participants in the home-based study were Veterans with a history of smoking who were being treated for COPD at the Puget Sound facility. To take part, they had to have smoked at least one pack per day for 10 years. Twenty-two percent still smoked at the time they participated in the study; the other 78 percent had quit. The participants also had to be using a COPD inhaler at least once a week. Plus, the cohort was almost entirely male and white, with an average age of 68.

The pharmacists made three monthly inhaler training visits via videoconference. Each session began with a pharmacist assessing the participant's baseline inhaler technique and assigning a pre-training score. The pharmacist then gave verbal instruction and demonstrated the correct technique, showing, for example, that it is essential to breathe out fully before using the inhaler. Many inhaler users make the mistake of not doing that.

Since a variety of inhalers were used, a different number of steps were assessed for each one, and each inhaler had its own scoring sheet. For example, the albuterol inhaler had 13 steps, and therefore the maximum score was 13. In comparison, the formoterol inhaler had17 steps, and a patient could have a score between 0-17 depending on how many steps he or she completed correctly. Many patients owned more than one type of inhaler.

In the end, the results showed that inhaler technique improved on average both during each visit and over the two-month study period.

The researchers stress that future studies are needed to compare this training approach with other inhaler training interventions, and to examine whether TTG training via videoconferencing can improve other health-related problems. Those problems could include more severe breathing symptoms due to COPD, which often need extra treatment with medications. Many COPD patients experience such symptoms during the course of their disease, Fan says.

He notes that TTG inhaler training via videoconferencing can also be used by patients with lung diseases such as asthma.