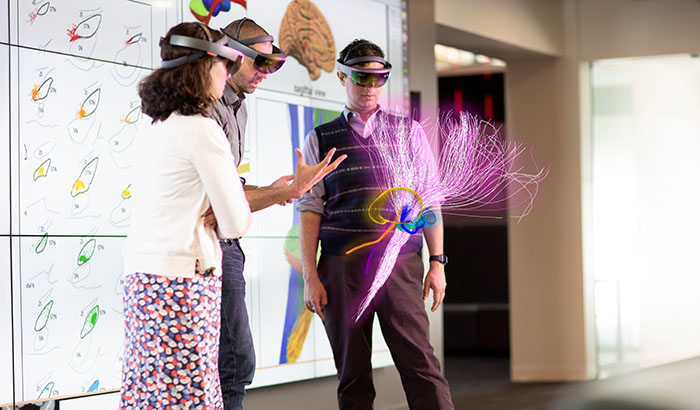 "We will have three separate pieces of information, and in the future we will be able to fuse them to get the big picture about a patient."

During his training as a neuroscientist, Dr. Aasef Shaikh studied eye movement and the vestibular system—the sensory system that contributes to balance and spatial orientation. Afterward, Shaikh wanted to apply what he learned to complex movement disorders. He decided to focus his research on Parkinson’s disease, a neurodegenerative disorder that causes gait and balance impairment. An estimated 1 million people in the U.S. have Parkinson’s disease, with an additional 50,000 people diagnosed each year.

As an investigator at the Cleveland FES Center—a consortium of the Louis Stokes Cleveland VA Medical Center and several partner organizations— Shaikh is now involved in three research projects related to Parkinson’s. In broad strokes, they examine how patients perceive the environment in which they walk, how they perceive their own motion through an environment, and how they navigate any given environment. 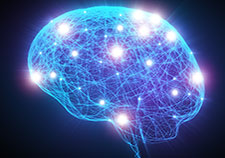 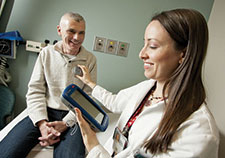 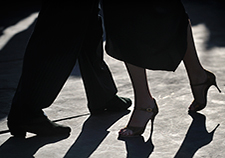 Parkinson's patients do the tango in hopes of improving walking ability, balance

All three projects use high-frequency deep brain stimulation (DBS). In 2016, Shaikh teamed with Dr. Cameron McIntyre, a fellow investigator and associate director of industry relations at the FES Center. Shaikh’s experience as a vestibular and eye movement scientist, combined with McIntyre’s expertise in DBS, provided “the perfect model” to study gait impairments in participants with Parkinson’s disease, says Shaikh.

“Through our research, we are beginning to understand more and more about which particular pathways and structures are responsible for perception of motion and heading perception in humans,” says Shaikh, who is a neurologist at both the Cleveland VA and University Hospitals Cleveland Medical Center. “In the future, we hope the much broader application of our work beyond Parkinson’s will be to use similar concepts and strategies to treat balance function or navigational problems in patients with any condition.”

Exploring why Parkinson’s patients veer to the side

One project focuses on motion perception. “We are studying how participants with Parkinson’s perceive their own directional heading—whether they are going straight ahead or veering to the side,” says Shaikh. “In addition, we’re also interested in understanding why they veer and which particular neural pathways are involved in perception of their self-motion.” Using that information, the researchers hope to discover how to tweak those pathways with DBS to eliminate veering.

Shaikh’s team is conducting behavioral experiments in the lab with motion simulators like the Moog Chair. These are similar to those used by NASA to train astronauts. In the pilot study, Parkinson’s patients with DBS implantations are placed in the simulator, where experiments are performed with the DBS turned on and off to determine if it makes a difference in perception of motion. That information is then combined with MRI images of the participants’ brains, and with bioelectric field stimulation models created by McIntyre.

“Together, this gives us a sort of 3D picture of everything involved in the process,” says Shaikh. “That allows us to understand how participants with Parkinson’s perceive their own directional heading.” Shaikh and McIntyre can view these models using the HoloLens. The device is a self-contained, holographic computer that allows users to interact with digital content and holograms in the environment around them.

“You see holographic objects in the context of the real world as opposed to virtual reality, where you are 100 percent immersed in a digital environment,” says McIntyre. “When you are able to still see the real world, you can see people’s faces and communicate with people around you.” He says this makes HoloLens technology an ideal teaching tool, particularly for understanding something as intricate as the human brain and its exquisite network of interconnected neurons. 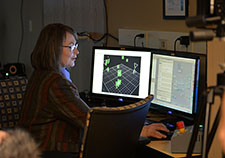 A second project uses resources in the Virtual Reality Human Performance Laboratory at the Cleveland VA. Shaikh and McIntyre are teaming with Dr. Elizabeth Hardin, a fellow investigator at the FES Center with interests in human walking performance and stability, to understand the physiological underpinnings of gait deficits in Parkinson’s.

One common walking problem is freezing of gait, in which patients stop walking and their feet seem stuck to the floor. “Unfortunately, we don’t know why it happens,” says Shaikh. “It’s a context-dependent phenomenon.” The researchers believe it may occur when patients move from a normal environment to one with a higher optic flow, where spatial landmarks around them seem to be moving at a higher speed.

“Parkinson’s patients might experience this in their daily environment, for example, when they go from the lobby of a hospital into a hallway, where it’s a narrower space and the landmarks are much closer to their vision,” says Hardin. “We are collecting data in the Virtual Reality Human Performance Laboratory to see if optic flow changes trigger participants to stop walking.”

Participants in the lab walk on a treadmill at a specific speed. Then, the researchers create a mismatch between the treadmill speed and the images—the spatial landmarks—in the virtual reality system. “All of a sudden the walls in virtual reality are moving at a much higher speed than the treadmill,” says Shaikh. “We have found that people freeze right then and there.”

Now that Shaikh’s team has discovered how to create freezing of gait on demand, they are studying how DBS can modulate the phenomenon. “We are interested in seeing how DBS affects freezing of gait when optic flow changes in a participant’s environment,” says Hardin. Ultimately, they hope to determine if participants have a propensity to freeze in certain environments and develop a biomarker for the propensity of gait freezing based on optic flow. 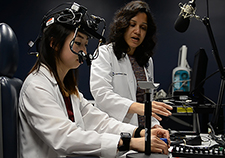 Probing the effect of DBS on eye movement

In the third project, his most recent,, Shaikh is working alongside Dr. Fatema Ghasia, a pediatric ophthalmologist and adult strabismus surgeon at Cleveland Clinic. She studies the role of abnormal neural circuits in strabismus (eye misalignment) and amblyopia (lazy eye).

“Parkinson’s disease is a particularly interesting area because up to 20 percent of patients develop diplopia [double vision], and that occurs because of strabismus and impaired vergence,” she says. Ghasia explains vergence as eye movements that people make routinely while viewing objects at different distances and depths.

Together, she and Shaikh will examine how Parkinson’s patients navigate their environment—how they use their eyes to “search and scan” their surroundings. Ghasia’s role is to assess eye movements in patients before the DBS implementation, while DBS is on and while it is off. “We have the capability to record the eye, head and limb movement simultaneously,” she says. “This allows us to independently assess the abnormalities of the eye movements and tease apart the eye movement abnormalities from the head oscillations and tremor that are frequently seen in Parkinson’s patients.”

The team approach is to investigate the use of DBS to see its effect on vergence and eye movements, in particular binocular coordination of eye movements, says Ghasia. “From the clinical perspective, the studies would provide valuable guidance to understand what the optimal stimulation parameters are for better motor outcomes in Parkinson’s disease patients.”

The same patients who participate in the motion simulator experiments will also partake in the virtual reality experiment with Hardin and the search and scan pattern assessments with Ghasia. “Now we will have three separate pieces of information, and in the future we will be able to fuse them to get the big picture about a patient,” says Shaikh. “That is very important.”