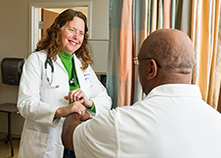 Dr. Lisa Backus, based at the VA Palo Alto Health Care System, led a study on the effectiveness of sofosbuvir (Sovaldi) regimens for VA patients with hepatitis C. (Photo by Joseph Matthews)

Dr. Lisa Backus, based at the VA Palo Alto Health Care System, led a study on the effectiveness of sofosbuvir (Sovaldi) regimens for VA patients with hepatitis C. (Photo by Joseph Matthews)

Costing as much as $94,500 for a 12-week regimen—or well over $1,000 per pill—new treatments based on the drug sofosbuvir (sold as Sovaldi) have been a welcome, if contentious, addition to doctors' arsenal for treating the hepatitis C virus (HCV).

The Food and Drug Administration approved sofosbuvir in late 2013. It approved the combination pill Harvoni, which includes sofosbuvir and another new drug, ledipasvir, less than a year later.

Critics say this and other sofosbuvir-based treatments are overpriced. But few argue over their effectiveness. The drug has been hailed as nothing short of a cure for the debilitating liver condition, with up to 95 percent of patients in clinical trials achieving a "sustained virological response" (SVR). That means the virus becomes undetectable in the blood and stays that way for at least three to six months after treatment, with little chance of coming back.

For a disease that can destroy the liver—and in some cases lead to death—the high price of therapy with the new drug is worth it, according to many health care experts.

But data from a new observational study in VA, the nation's largest provider of HCV care, may temper expectations for the treatment. 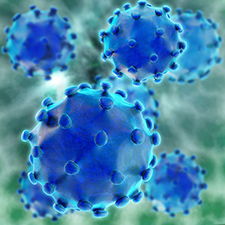 The good news is that these rates far outpace those of previous HCV treatments. The disappointing news is that they fall short of the impressive cure rates seen in clinical trials for sofosbuvir, which have generally reached well above 90 percent—even before Harvoni's arrival.

The new VA findings are in the September 2015 issue of Alimentary Pharmacology and Therapeutics.

Lead author Dr. Lisa Backus says it's not unusual for real-world results to trail those seen in clinical trials. The VA results are encouraging nonetheless, she says.

"The work does show that the promise of substantially higher SVR rates with all oral regimens is achieved in routine medical practice," says Backus. "Our results are in a population generally not included in clinical trials, and even so, the SVR rates were much higher than those seen with previous regimens."

She adds, though, that the study "also serves as a reminder that in the real world, response rates—even with these much more potent regimens—still may not be as high as in the clinical trials. Patients and providers thus need to temper their expectations appropriately."

Backus, an internist based at the VA Palo Alto Health Care System in California, is also a researcher with VA's Office of Public Health.

She notes that with the previous standard of care, based on the antiviral drugs boceprevir or telaprevir, along with a form of interferon, SVR rates in VA were only around 50 percent.

These therapies were generally based on either boceprevir or telaprevir—two different antivirals—along with a form of interferon.

Clinical trials of the newer sofosbuvir-based regimens have reported extremely low discontinuation rates—around 3 percent or lower. In the VA population studied by Backus' team, the rates were in the 10 to 14 percent range.

Backus say the newest HCV regimens now available are indeed "fundamental game-changers." Along with their higher SVR rates, they cause fewer side effects. Part of the reason is that they don't include interferon, which has an especially troublesome side effect profile. Also, the new regimens are shorter. They usually last 12 weeks, instead of 24 or 48.

Sharper discontinuation rates may be part of the reason why VA patients in everyday care had lower SVR rates than those seen in the sofosbuvir clinical trials. Patients who can't make it through the entire drug regimen are obviously not as likely to get the full impact on their viral load.

Either way, the gap largely boils down to differences in patient populations. VA patients may be more likely to have other physical or mental health problems that complicate treatment. There may be cultural or economic factors that affect adherence to treatment plans.

In their paper, Backus and colleagues point out that their study was based on "historically more difficult to treat patients where more than a quarter were African American, almost 90% were over the age of 55, over a third were overweight, and substantial proportions were treatment experienced and had advanced liver disease."

That said, she notes that "VA has substantial expertise in HCV and has pioneered multidisciplinary treatment to HCV treatment." Those factors would tend to nudge SVR rates higher, even with a difficult patient population.

On balance, Backus feels real-world treatment outcomes for Americans with HCV are probably closer to those seen in the VA study than to those seen in clinical trials. Drug trials often don't adequately represent inner-city populations and certain other demographic groups.

It should be noted that the actual regimens studied by Backus' group have now been largely replaced by even newer sofosbuvir regimens—namely Harvoni.

Because Backus' study was based on care delivered between January and October 2014, it didn't include Harvoni, which was approved only in October 2014.

The combination pill has now come into use in VA clinics nationwide. The discounted cost to the agency is about $45,000 per 12-week regimen.

Backus says a new VA observational study is now underway looking at outcomes for this newest HCV treatment, and for another new regimen that doesn't involve sofosbuvir.

But even so, she says her group's newly published results are still informative. Importantly, they are based on real everyday clinical conditions—not the carefully controlled world of clinical trials.

She says that going forward, that bodes well for Veterans and others with HCV, regardless of which specific regimen they receive.